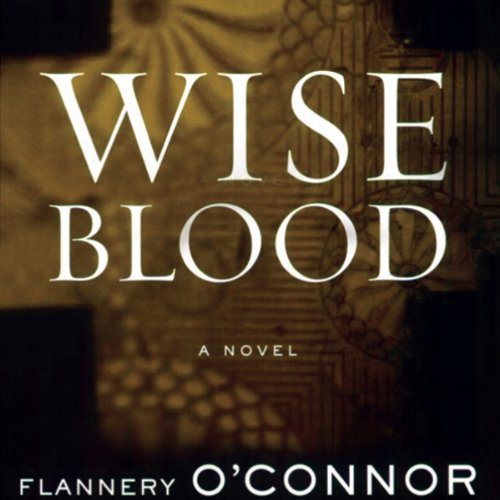 By: Flannery O’Connor
Narrated by: Bronson Pinchot
Try for £0.00

Flannery O’Connor’s astonishing and haunting first novel is a classic of 20th-century literature. It is the story of Hazel Motes, a 22-year-old caught in an unending struggle against his innate, desperate faith. He falls under the spell of a “blind” street preacher named Asa Hawks and his degenerate 15-year-old daughter.

In an ironic, malicious gesture of his own non-faith, and to prove himself a greater cynic than Hawks, Hazel founds The Church of God Without Christ but is still thwarted in his efforts to lose God. He meets Enoch Emery, a young man with “wise blood,” who leads him to a mummified holy child and whose crazy maneuvers are a manifestation of Hazel’s existential struggles.

This tale of redemption, retribution, false prophets, blindness, and wisdom gives us one of the most riveting characters in American fiction.

“No other major American writer of our century has constructed a fictional world so energetically and forthrightly charged by religious investigation.” ( The New Yorker)
“There is in Flannery O’Connor a fierceness of literary gesture, an angriness of observation, a facility for catching, as an animal eye in the wilderness, cunningly and at one sharp glance, the shape and detail and animal intention of enemy and foe.” ( The New York Times Book Review)

What listeners say about Wise Blood

This is probably one of the weirdest books I've listened to. The entire cast was angry. Maybe it was the just the opinion of the guy who read it.

This is several short stories pasted together. Themes of redemption, racism, sexism, and isolation also run through the novel. Christians may take offence as Jesus is repeatedly rebuffed.

Little comfort in this Southern masterpiece

Having come to this with some eagerness from a recommendation - or was that an indirect citation - from Donna Tartt, I must confess to being again greatly disappointed with the Southern Gothic genre to which this is attributed as a masterpiece. I previously struggled with William Faulkner and finally managed to get it - enjoying Sanctuary far more than As I Lay Dying but I am beginning to suspect that that is as far as I am going to go with it....I really could not make head or tail of this one - supposedly a comedy of grotesques. Grotesque, yes. Preachers of all sorts, casual prostitutes, panhandlers and low lifes - I can all just about handle, even though they are presented in a rag-bag narrative that I found impossible to follow.....but men (was it a man?) dressed in Gorilla outfits, buckets of lime used to self-inflict blindness and a sudden mid-air cut out of an ending. Where did it come from, where did it go to - I'm clueless. I could just about live with the repeated bashing over the head with the N-word- and would not even attempt to go there in terms of thinking about how the realism might somehow excuse the casual and comprehensive racism of the society - I'm not convinced that there was an ironic distancing...it was just repeated, plain and unpleasant. I know that a lot of time and effort has been spent in habilitating or rehabilitating Southern writers, but for me, in the context period of the 1940's it just doesn't wash. I saw a great production of Killer Joe by Tracey Letts around ten years ago and at that point the smoking gun was pointed squarely at Trailer Trash and I guess that is pretty much where the focus has been in this sort of Gothic writing for the past twenty years. Not uniformly edifying but certainly good enough in parts to warrant and occasional return to the genre. But Flannery O'Connor, for all my good intentions and the hype will probably have seen the last of me.

I'm sad that this was the last Flannery O ' Connor audiobook left for me to listen to after finishing the other three weeks ago. Regardless, this will be an audiobook I will listen to again...and again. I read this years ago, but listening to it was an even better experience. Bronson Pinchot brings this story to life and very much gives it the zest O ' Connor regarded to in the introduction of this novel. This story is so many things; crazy, funny, weird, and thought provoking. I love her flawed, crazy characters and getting in their heads to understand why they do the crazy things that they do. Flannery is one of my favorites and I look forward to listening to all of these audiobooks again.

Holy crap and profit! I think Flannery O'Connor could go 10 rounds with Cormac McCarthy and still end with a draw. Wise Blood is an amazing look at sin, heresy, apostasy and redemption(?). No. Redemption might just be too hopeful for this O'Connor. Wise Blood is an amazing reworking of several of her shorter stories, but where this novel might have ended up as some Frankensteinian monster in lesser hands, Wise Blood pulls it off. It is a monster for sure, but you never should confuse a grotesque Southern Gothic masterpiece with a deformed literary Prometheus. This novel is amazing

Excellent novel, some problems with the narration

First off, let me say that I was really very impressed with the book. On the surface, it's basically a freak show of religious nuts, con artists and madmen, with none of the plot lines making too much sense; but when you go beyond the surface you see the different themes -- religious, philosophical, social -- that make this such a deeply brilliant and open-ended work.


However, a couple of things about the narration bothered me. Bronson Pinchot has a very clear and pleasant voice, but I felt almost like he was performing the characters, rather than narrating a book. The biggest problem was that whenever characters speak in a low voice he actually whispers. For anyone who listens to audiobooks while commuting, this makes some phrases almost impossible to hear. Indeed, I had to listen to some passages over and over again before I could make them out.


The other issue I had with his narration is more a matter of taste: he took great care to give the characters different voices, but to me it resulted in over-interpretation. For example, he performs one character in the book (Enoch) as having a permanently stuffy nose, so that he would pronounce "I mean it" as "I bead it". Now, there is no trace of this in the printed book (I checked), and so I feel like the narration added more than I wanted. Like I said, I'm sure many people wouldn't mind this at all, but I like narrators to add the minimum required for me to be able to differentiate speakers, no more.


So, in the bottom line, I would recommend this book, but if, like me, you listen to audiobooks in an environment where there is some outside noise, or you prefer a more subdued narration style, be prepared.

A strange brew of a story

Mostly unsympathetic characters, a wonky moral compass, and a bleak aesthetic make Wise Blood a tough read. If you can stick with it, though, there are some gems hidden in O'Connor's artful language. And Bronson Pinchot brings the story to vivid life in all its Southern grit and glory.

I noticed some comments about Bronson Pinchot's performance; some listeners found his reading too energetic and over-the-top. I have to disagree. For me, the story came alive and was more enjoyable because of his reading style. As for the novel itself, the characters are created so effectively they reminded me of people I once knew. The language is plain, in that mid-century American novel style that is hard to do well. The story is fantastically unexpected; dark, humorous, and entertaining.

I agree that Mr. Pinchot's narration is a bit more spirited than some readers would likely prefer. But I think he actually does a decent job, and the story itself is excellent. Classic Southern Gothic, from a brilliant author.

Beautiful book and wonderfully read! Love Flannery! Thank you for a lovely experience in Christ through Mary, Fr. Michael
Priest

Bronson Pinchot does an excellent job of bringing this wonderful classic to life. I think Flannery O'conner would be proud of this reading. Thanks Audible. I hope you bring us more from this author.

This is a hard book to listen to because it depends so much on her particular, bleak sense of modern American life. I very much admire some of her short stories, and they're a skeleton key for me in beginning to understand this. She calls it a "comic novel," and there are clearly parts that could be funny. In the context of this God-forsaken world, though -- and "Godforsaken" has a particular if difficult sometimes to parse meaning in O'Connor's works -- nothing is really funny. It's a lot of suffering brought on by incomplete understanding of the possibility for salvation. As a Jew, I admire the intensity of the work, but I can't say it speaks to me entirely.

The reader was fabulous, giving real character to different voices.

The characters are ghastly and well developed. The writing was masterful and stylish.

I got into the protagonist head thanks to the great narration.