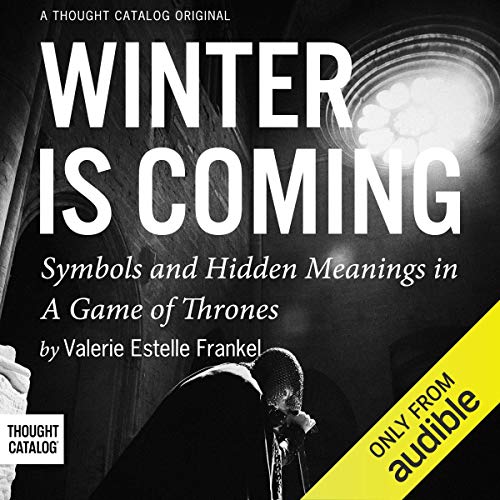 By: Valerie Estelle Frankel
Narrated by: Oliver Wyman
Try for £0.00

Game of Thrones fans watch in delight as the epic battle of Lannister and Stark entangles the Seven Kingdoms. But only the sharpest notice how these houses echo Lancaster and York in the War of the Roses. Druids, Catholics, and even Zoroastrians wander through Westeros, reframing their religions for a new world of fantasy. But how medieval is Westeros? Did lady knights and pirates really battle across Europe? The audiobook Winter is Coming: Symbols and Hidden Meanings in A Game of Thrones explores all this and more, from the echoes of history to the symbols and omens our beloved characters.

Who is Jon Snow's mother and why is she a secret? What is Daenerys's real power, unknown even to her? Will these two characters share a destiny? Where is the red priestess's real Light bringer and when will it arrive? Through dreams and prophecies, imagery and allegory, the deepest secrets of the series unfold, in an exploration friendly to watchers and listeners alike.

What listeners say about Winter is Coming

Would you try another book written by Valerie Estelle Frankel or narrated by Oliver Wyman?

What was most disappointing about Valerie Estelle Frankel’s story?

Some sections are repeated. I appreciate that some events/themes may be relevant in several sections but repeating the points word for word is annoying.

Different voices are not really informative.

A mixture of "more informed" and "annoyed".

An interesting reminder of some points in advance of Series 4.

A Sony of Speculation

What would have made Winter is Coming better?

Less theorizing, speculation, conjecture, and second guessing the Author's intent as well the Film scriptwriters as she includes the HBO series.

Has Winter is Coming put you off other books in this genre?

Absolutely not I have been reading SF since 1955. And GRR Martin since 1986

What does Oliver Wyman bring to the story that you wouldn’t experience if you had only read the book?

If you could play editor, what scene or scenes would you have cut from Winter is Coming?

I would not have accepted it for production

I am only surprised that the author did not include a reference to Area 51 in Nevada I believe her speculation is in the same category. I hope GRR Martin has a good laugh at these theories

interesting listen. answers some questions about characters in the Game of Thrones. the historical take with English. royality is interesting. you can see. the trates once they are compared side by side.

insights into Game of Thrones

Very interesting. This book is very helpful in knitting together ideas from the epic tale

Great Look Into Future of Game of Thrones

Would you listen to Winter is Coming again? Why?

I might listen this this again. It is short and an easy listen. There is lots of thought provoking discussion and a behind the scenes look at what is really going on. Good discussion of symbolism in the books.

What was one of the most memorable moments of Winter is Coming?

I especially enjoyed the discussion on Jon's parentage. This is something that my daughter and I had discussed at length and some of the theories that we had come up with were discussed as well as some that we had not thought of.

I enjoyed the discussion of prophecy of what was going to happen in the future for Game of Thrones especially in regards to the dragons.

This that was a book about other books it did not provoke extreme reactions. It was enjoyable from beginning to end.

The narrator was easy to understand which is my first priority for a audible book. I would buy this one again.

Reference book, not for listening to

Would you try another book from Valerie Estelle Frankel and/or Oliver Wyman?

This book is for reference while you look at the books in the series. It is not for listening to, there is no flow. Page numbers are given for reference, but it jumps around from story to story, book to book. It also references the television shows as frequently as it does the books. It tells which episode, in which season, to refer to.

He read well enough. It wasn't his fault that it wasn't a flowing story.

I think I would enjoy a hard copy, it had interesting points, but there was no continuation of the points. No discussion. There was a short reference sentence, then on to an unrelated topic.

Winter is Coming sort of felt like a cash grab. I'd consider myself a fan of the series but not nearly as hardcore into Game of Thrones as many. Like most I read the books and am now thoroughly enjoying the HBO series. After receiving a credit on Audible I purchased Winter is Coming: Symbols and Hidden Meanings in A Game of Thrones to try and get a better idea of what is to come for the rest of the series.

The first half of Winter is Coming is far more interesting then the second. More then anything it focuses in on Jon Snow and Daenerys Targareyen and their importance to the series. There was some interesting pieces pulled from both the show and books that I overlooked but that do point to the two connecting at the end of the series. Where this book lost me is its parallels to real-life history and religion. I'm sure George R. R. Martin used things from this world to influence his novels but that was far less interesting to me then the predictions for the end.

Even for the couple of dollars the book costs, I'd rather have read Game of Thornes message boards then read this one again.

Good short listen, about GOT

Where does Winter is Coming rank among all the audiobooks you’ve listened to so far?

Not a great listen, but fun if you are a fan of GOT, A Song of Ice and Fire.

Nothing really. The book is very short and tackles what it set out to do.

Which character – as performed by Oliver Wyman – was your favorite?

When he barked like Winter the Dire Wolf. Just kidding that doesn't happen.

This book is about symbolism, back story and metaphors in GOT, A Song of Ice and Fire. If that's what you're looking for then this is the book for you. If you are only watching the TV show be warned because it does contain spoilers from newer books. At only 3 hours long I paid for the book, and did not use a credit.

Know GOT? This'll Blow your mind!

If you could sum up Winter is Coming in three words, what would they be?

I loved the ideas and the discussion of parallels to European history. Though as far as the characters were concerned the vast majority of the interesting discussion is about John Snow.

In case you overlooked plot twists...

This is cliff notes for Game of Thrones. Like Cliff notes you get much more out of them when they are read after the novels.

great review and food for thought

What did you love best about Winter is Coming?

it had been awhile since last reading the books, currently published, it was great as a refresher on all the little plots and possible outcome of future events. Plus it broke down some of the more prominent characters into there smaller parts.

If you have read all five books this is the book for you!!! I've read all five books and listened on Audible and i still don't understand everything that is going on in the 7 Kingdoms. This book will fill in the blanks book by book and page by page. You will learn a lot about John Snow and the story of his mother. you will learn about bastards in Westrow and a lot about the Dragons!!! I still can't get enough. If your a fan check it out.

"Winter is Coming" is pretty much an overview for the first three season of "Game of Thrones" and a synopsis for the books for "A Song of Ice and Fire." There is nothing much that we don't know already. If you already caught up with the books and the show, you already know what is going on. This book is just speculation with no explanation. It's like reading the Cliff Notes instead of reading the book and you wonder why you failed on the term paper.

Must read for Song of ice and fire fans!

What made the experience of listening to Winter is Coming the most enjoyable?

Some of the theories that are brought up I had thought of by my self. To find out that others thought the theory might be right was exhilarating.

What was one of the most memorable moments of Winter is Coming?

I had thought of an idea by my self that the book brought up as the most likely posobility about Johns ancestors.

He was fantastic. When he switched between characters his voice made me know who was talking.

I laughed a bit.