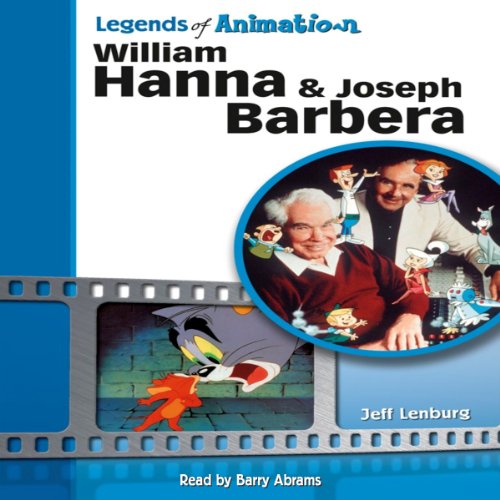 William Hanna and Joseph Barbera: The Sultans of Saturday Morning (Legends of Animation)

William Hanna and Joseph Barbera: The Sultans of Saturday Morning (Legends of Animation)

The seven-time Oscar-winning team of William Hanna and Joseph Barbera created or produced some of film and television's most beloved cartoon characters, including Tom and Jerry, the Flintstones, Yogi Bear, Jonny Quest, the Jetsons, and Scooby-Doo

They also pioneered and revolutionized television animation with a less expensive style of animation that allowed them to produce the hundreds of memorable cartoon series still shown today around the globe. Through the 1960s and 1970s, Hanna-Barbera was a top producer of television animation, and the team also produced numerous animated features and television movies. The 50-year partnership between William Hanna and Joseph Barbera resulted in the creation of some of the most memorable and popular characters in 20th-century animation and pop culture.

The Narrator was a little over the top

...but maybe that's fine because of the subject matter being cartoons. Otherwise an interesting and enlightening story.

I loved it, it was a good and easy read and very informative. My only complaint would be the narrator, his voice is rather annoying, but you get used to it after a while. He often stresses words out that don't need to be stressed, and when reading off a list (there are mutiple times when they list off shows and/or characters) he can tend to sound confused. He also randomly starts a sentence over, some times cutting the words in half and repeating the sentence. Also, speaking more of the actual writing of the book and not the narration, there are some parts (primarily when speaking of their childhoods) that some stories seem to be randomly thrown together and it doesn't flow very well. Other than those minor flaws, the book is very good and a must read for Hanna-Barbara fans.