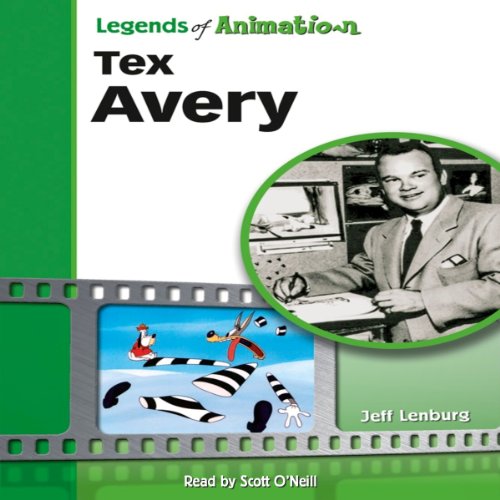 By: Jeff Lenburg
Narrated by: Scott O'Neill
Try for £0.00

Tex Avery, considered the father of screwball animation, was one of the most influential animators of the 1930s, 1940s, and 1950s. Creator of such classic characters as Bugs Bunny, Daffy Duck, and Droopy, he directed many cartoons for Warner Bros., MGM, and Walter Lantz Productions and was nominated for six Academy Awards.

Avery did much of his groundbreaking work in Hollywood, running the famous "Termite Terrace" animation studio. There, with a team that included fellow innovators Chuck Jones and Bob Clampett, Avery developed an animation style based on the idea that the artist could do anything in a cartoon and didn't need to base it in reality. Although Avery was blind in one eye, he did not let it hold him back. Known for his inventiveness and comic timing, he forged a legacy that influences animators today.

Tex Avery: Hollywood's Master of Screwball Cartoons illustrates this animation pioneer's life, his inspiration, and his lasting effect on the animation world.

"For Avid Cartoon Fans Only"

As my title suggests I feel that only the avid cartoon buff would want to listen to this book. If you happen to be one of those as I am I think that you will find this book worth your time. This book covers Avery's career at both Warner Bros. and MGM Studios as well as his later career directing television commercials quite thoroughly. If you are also looking to learn about the subject as far as his private life is concerned it is touched upon but does not go into any great depth. The reason being he was a very private person and did not grant many interviews nor do a lot of personal appearances. If indeed you are looking to find out about his private life you probably will find this book not to be worth your time or effort. The reader though he tries his best to my ear comes off a bit wooden in his performance. I still found the subject matter absorbing. Remember the book focuses primarily on the minutiae of his craft and career not as much on his private life. If indeed you are. looking for an in depth study of the private life of the subject this book it may not be for you.

Its a computer right?

What did you love best about Tex Avery: Hollywood's Master of Screwball Cartoons (Legends of Animation)?

What I loved best about Tex Avery was his humility. I really enjoyed how this audiobook went all the way back to his beginnings in Taylor, Texas. I learned a lot about Tex Avery but something that really stood out was that he was a lineal descendent of both Judge Roy Bean and Daniel Boone. Tex made "What's up Doc" a standard salutaion in the mainstream of society.

What other book might you compare Tex Avery: Hollywood's Master of Screwball Cartoons (Legends of Animation) to and why?

I don't know of any other books I would compare this one to other than the other Legends of Animation Series books.

His performance was fine. He kept a steady pace and was easy to understand. I enjoyed his work very much.

If I were to make a film of this book, the tag line would be the title. "Tex Avery: Hollywood's Master of Screwball Cartoons".

I received this audiobook foc in exchange for an unbiased review.