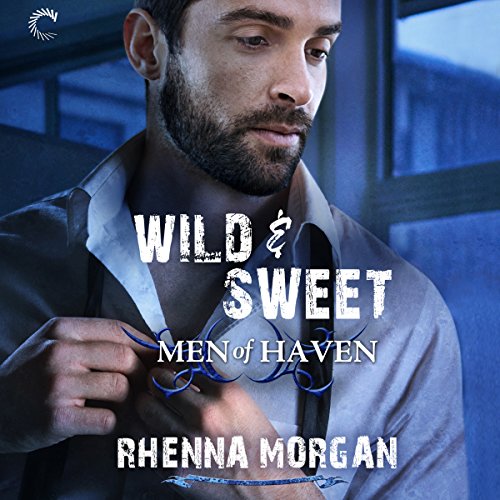 By: Rhenna Morgan
Narrated by: Gary Furlong
Try for £0.00

Live hard, f--k harder, and follow only their own rules. Those are the cornerstones the six men of the Haven Brotherhood live and bleed by, refusing to conform to society's expectations, taking what they want and always watching each other's backs.

Zeke Dugan is not a man who walks the straight and narrow. He may have sworn an oath as a trauma doc, but he has zero problem leveraging his medical skills outside a hospital if it means giving the Brotherhood - the group of men he calls family - an advantage. Blood before business. All that changes when shy Gabrielle stumbles into his life and ignites his protective instincts.

Mechanic Gabrielle Parker prefers the complexities of an engine over men. Her life wasn't always quiet and well ordered, but now that it is, she finds peace in the solitude. When a robbery in her neighborhood forces her out of her safe bubble, she never fathoms that a dangerous, cocky trauma doctor will fix more than her injuries.

Zeke doesn't play by the rules that Gabrielle follows but knows that he's exactly what she needs in her life. He'll show her the fierce and uncompromising protection that comes from belonging to a man like him.

When tension outside the Brotherhood threatens Gabrielle, Zeke will do anything to keep her safe, and damn the consequences. No one will hurt his woman, even if it means putting the very men who saved his life at risk.

What listeners say about Wild & Sweet

THIS AUTHOR DELIVERS ON SO MANY LEVELS

A tight Brotherhood made up of six sexy alpha men who have each other's backs no matter what - even if that means going 'around' the law because they live by their own moral code. If a threat looms, they band together utilizing each other's differing skills and are prepared to risk everything to protect their brother.. or the one they love. And, in this story, the Brotherhood have been deciding whether to take on Auto Mechanic Danny as a new member and Trauma Doc Zeke from the Brotherhood is with Danny when he gets an urgent and distressing call from his sister Gabrielle (aka Gabe) who has been injured in a robbery gone wrong.. and, of course, Zeke goes to help.

Gabe is also a Mechanic - she's a shy introvert with abandonment issues, low self-esteem and gets tongue-tied so the last thing she wants, or can cope with, is a hot sexy Doctor focussing all his attention on her. But, as far as Zeke is concerned, its game over for him because this tiny guileless blonde pixie immediately peeks his interest.. and his alpha protective instincts too because someone's hurt her, someone's buying up the neighborhood, someone's even killed to get it.. and that someone must be stopped. And the more Zeke learns about Gabe the deeper he falls.. but convincing her of that fact, introducing a very timid Gabe to his Brotherhood family, trying to overcome her delicate sensitivities and showing her she's the only woman for him, proves to be harder than he thinks.. but he's ready, willing and very able to tear down all her misconceptions brick by brick.

A very enjoyable slow-build romance with some suspense and a good cast of secondary characters who make up the Haven Brotherhood and the camaraderie between them was great. Zeke is a hot high-octane thrill-seeking Brazilian whose non-stop senses are finally calmed by a sweet timid introvert who brings out his tender, passionate and possessive side. There's hot sexcapes, a bit of angst and some drama too to the dual POV storyline and Gary Furlong's narration was excellent.

Worth a credit? Yes.. and this awesome series is quickly becoming one of my favorites.

This story entertained me with the main character being a Emergency Doctor and the heroine being a very introverted lady mechanic. She has a phobia about being around people and they meet when she's attacked while checking on a neighbor's house. He's almost immediately smitten, but she has a long way to go to be able to be close to and trust someone. The story was original, and this is the second book in the series. Narration was very well performed.

Loved this one!! Storyline was great, narration was great, and couldn’t get enough. Zeke and Gabe compliment each other and balance. Love the audio.

I have listened to the entire series. And while I enjoy John Lane's narrations he dosen't make my panties combust like Gary Furlong. His accents are divine especially his Portuguese. He made my ancestral Language the sweetest music to ones ears. I hope and pray he is doing Axle's story. I would pay a small fortune to hear more of his accents especially his Portuguese & Scottish.

Rhenna Morgan I loved the entire series and await Axle as read by Gary Furlong. The brothers are HOT! HOT!! HOT!!! and they are paired with equally strong women which is always a winner. The sexy times vary from book to book but they are written to perfection.

completely in love with this series so far!!!

the narrator is fabulous, the writing is on point, and the sex scenes are hot

I'm loving this series! The men are strong & tender, while the women are brave & sweet. I've already got the third book on pre-order! 👍👍

Part of the Haven brotherhood , Zeke met Dan when he fixed his car. Dan had a sister Gabrielle Zeke met after Dan began to work with Haven.
Zeke is an ER dr and was forever unable to relax and kept unusually busy to rid himself of unease.
Gabriella had several social anxiety and enjoyed quiet peaceful times alone or with her brother.
The backstories and a present mystery keep the story moving. Likable main characters and secondary characters we become attached to and looking forward to each individuals life.
The narrator did a great job. On to book 3.

This was # 2 in the series. Imo it wasn't as good as the first book. But Rhenna Morgan did research on mental illness. I don't think any of the other "brothers of Haven" would of had the patience or knowledge of this type of mental illness. Dr. Zeke "handled" Gabe with the respect and patience she needed.
The reason I gave only 4 stars wasn't bc of mental health issues, it was the lack of the flow. I expected more action from the "brothers ". The narrator Gary Furlong did an excellent job with the Scottish brogue and Gabe' s voice. I think I would liked to had gotten this series on sale or waited and used my credit.