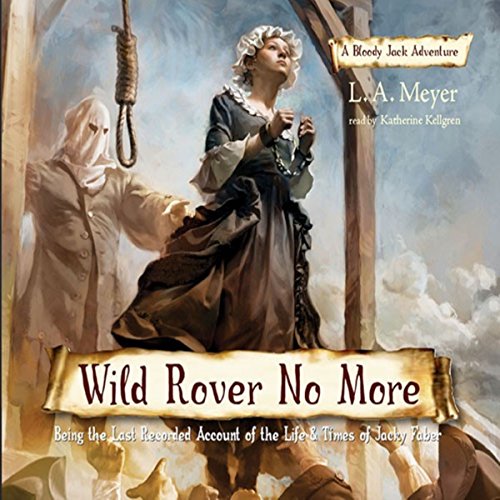 By: L. A. Meyer
Narrated by: Katherine Kellgren

Jacky Faber is framed as passing confidential U.S. information to the British. Forced to flee Boston, she goes undercover as a governess for a prominent Puritan family. When outed by a nosy postmaster, she deserts the respectability of her position, dons a leotard and slippers, and poses as a Russian tightrope walker in a traveling circus. But the law soon catches up with her, and prospects do not look good. Through her many adventures, Jacky has always found the ingenuity to escape dire situations, but this time it looks like Puss in Boots has run out of lives... and her happily-ever-after will be cut short at the foot of the gallows.

I feel I have lost a friend.

I have listened to the entire series over the last couple weeks. I am a truck driver so I have ample time to follow through with all the books. I will say this is the best series I have ever listened to, and I am currently more than 30 days of aduble books yes over 720 hours of books.

on to the story, I do feel as though I have lost a friend. I have lived with Jackie over the last 2 weeks and all her struggles and rewards. I have laughed out loud, I have cried, I have been frustrated, and have been dumbfounded. but as Jackie is in the story it always pops back up and leaves me wanting more. it's now time to move on to a new adventure and Jackie had done.

if you ate looking for a series of books that will lead you around the world and back again, through struggles and rewards then this is the series to begin. I will strongly advise the following, listen to them in order bloody jack is the first one, and don't plan on much sleep one you start. as just this past Saturday night I sat in my truck and listened to the book for 7 hours just sitting there (I was going out to eat but the book had me spell bound) I think I finally feels asleep at 3 am.

well I guess the time had come, I must start the search for another series. but Jackie will always be in my heart. (I will probably listen to the series again right now)

Satisfying Ending to a beloved series

Well Played Mr. Meyer you made me laugh, you made me cry and gave Jacky the sendoff she deserved!

Great narration by Katherine Kellgren, as always, but this time she had to do a Russian accent and sing in that accent, you are an amazing talent Ms. Kellgren!

I don’t want to spoil this book for those of you that have read the entire series, so I will just say I enjoyed this book more than Boston Jacky and it was an excellent end to a fabulous series that will forever be a go-to book for me and I know I will listen to this series again and again.

I am sad that the series is over but am glad that Mr. Meyer had the chance to finish the book before he passed away and that we won’t end up with another author coming in and ruining his work. I am so glad your memory will live on in the wonderful characters you have written, RIP Mr. Meyer.

What made the experience of listening to Wild Rover No More the most enjoyable?

I have loved all of these books so very much. young adult fiction? bah... these books are for everyone! Or.. I am just a kid at heart. I stayed up all night listening to this book and laughed and cried. I rarely do that.

Well, not to give any of the story away, but the final reckoning was wonderfully done.

She is among the best of the audible performers. I will listen to anything she does. She IS Jacky Faber.

I hope generations of readers, both young adult and adult, read these books, listen to these books, cherish LA Meyer's wonderful work and Katherine Kellgren's masterful performance. I know I will listen to them again and again.

I hesitated for over a year to listen to this, because I didn't want Jacky to die. I even re-listened to all the others! I almost wish I hadn't re-listened because the one thing I didn't care for in this one was that Jacky actually seemed younger psychologically to me, which I might not have noticed had I not been thinking how much she had grown over the years. I imagine this was largely a result of having actually been written earlier, as Mr Meyer explained that he did. Of course I am very glad he did, because in the end it was a satisfying ending, and I am deeply saddened at the passing of such a wonderful author. The first hour or so was super shrill with Jacky swearing off men and raging about Clarissa, and a painfully long letter from Clarissa herself. Anyhow, suffice it to say, it is far from the best of the series

But I haven'the listened yet...

Well, I hadn't listened to many female narrators; I am hooked on George Guidall, and Iove the Le Carré Smiley books by Frederick Davidson, and David Aaron Baker's Odd Thomas. Then I listened to the first Royal Spyness mystery, and I thought "wow", very quietly and with some reverence. "This woman
can really read you a book!" After I searched Audible by narrator, I discovered Jacky Faber and her adventures. The stories are really good - while demanding a large suspension of disbelief - but Katie Kellgren makes them PERFECT. I have listened to all but this one (ah, farewell, Mr Meyer) but I am listening to them all once again before I have to come to the end of the story. And as I expected, the narration alone let me hear more this time than the last.

With printed books I have always been a re-reader;(Susan Howatch, Thomas Costain, Steven King, Mary Stewart, Dick Francis) and I find with audiobooks it is just the same. Sometimes I read 'em again right away, sometimes I need to let a year go by. Not this time...Jacky Faber was so wonderful I think I did the "3 extra credits" thing three times running! A HUGE part of this devotion is due directly to this wonderful narrator.

Whew! The stories are really neat, but Katie Kellgren as a narrator leaves me breathless ( or speechless). I would buy an audiobook just on her name as narrator. Don't miss this series!

PS But George Guidall, dear, you will always be first in my heart (and ears)...

I didn't actually think I would like this when I got the first book in one of the sales and didn't listen to it for probably a year. I am so glad I found these books and I wish the series never had to end.lt will be so difficult to find something new to listen to. Loved the characters and it was very positive and up beat. The book was made even better by the excellent narration.

The end of an Era

I remember picking these books up in middle school and devouring them until I got busy with my adult life. I recently came back around to finish the series through audible and the performance through the series is amazing and intriguing. Wild Rover No More is the perfect way to wrap up Jacky's story. I don't think I would have asked for it any other way.

i have listened to all the books in this series and loved it ,wish there were more books

sail on Lou, we will miss u

One of the best series I’ve ever read

The final book in a series that started off as something to listen to at work, finally come to an end. This series was absolutely a guilty pleasure for me and I enjoyed every book. No spoilers, read the series in order and you will be happy with this book at the end.