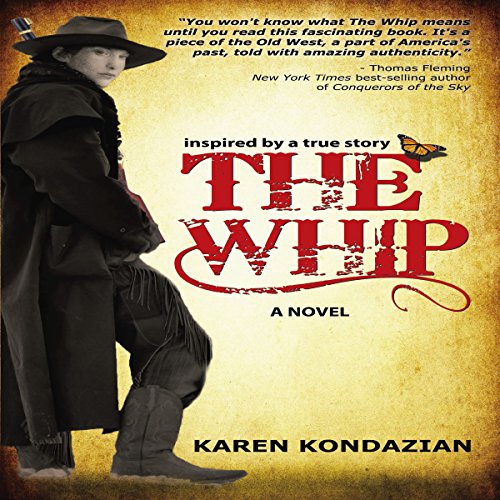 The Whip: Inspired by the story of Charley Parkhurst

The Whip: Inspired by the story of Charley Parkhurst

The Whip is a multi-award winning novel inspired by the true story of Charlotte "Charley" Parkhurst (1812-1879) who lived most of her extraordinary life as a man in the Old West.

As a young woman in Rhode Island, she fell in love with a runaway slave and had his child. He was lynched, her baby killed. The destruction of her family drove her west to California, dressed as a man, to track the killer.

Charley became a renowned stagecoach driver for Wells Fargo. She killed a famous outlaw, had a secret love affair, and lived with a housekeeper who, unaware of her true sex, fell in love with her.

Charley was the first known woman to vote in America in 1868 (as a man). Her grave lies in Watsonville, California.

"I would have done that," Ms. Kondazian said in a telephone interview. "I would have probably put on men’s clothes, to be free like a man." (New York Times interview of Karen Kondazian - from “Overlooked No More: Charley Parkhurst, Gold Rush Legend With a Hidden Identity”, by Tim Arango, December 5, 2018)

What listeners say about The Whip: Inspired by the story of Charley Parkhurst

Too too sad for me to finish, so a personal review

Narrator is great, and the story may be great -- I made it about halfway through but the violence is so sad and horrible that I could not finish the book. I can handle some violence, and can take sadness in books, but this one was too much. The writer is good, so if you can handle it, great.

Where does The Whip rank among all the audiobooks you’ve listened to so far?

This by far, is my favorite. It's not only true, but an exciting story. Robin Weigert is brilliant. The only actress who could have narrated this book, Robin is very, very brilliant. Robin is incredibly convincing with each character and each characters voices. I wish to see this in a movie but only if Robin plays Charlie Parkhurst.

It was based on a true story. To her ownself she was true. From not allowing the color of a man's skin or his station enter her decision to fall for the man she loved.

What does Robin Weigert bring to the story that you wouldn’t experience if you just read the book?

Robin does each voice brilliantly. Not just good but committed to a level that one usually doesn't get to experience. Brilliant, brilliant, brilliant. The ONLY actress who could have performed these characters so well. Robin hits a level of excellence very much appreciated by this listener.

Several. When Tonia acts on her impulse to even the score for Charlie. When Charlie makes her decision to just, change after being kicked by the horse. When Charlie's old friend returns. Also, when Sugar Foot's identity was revealed to her.

I appreciated the obituaries at the end. The acknowledgement for this brave woman who was unofficially "the Whip" of the West. Also to know that she was probably the first woman to vote in the United States. I would like to see this and Charlie Parkhurst honored at the Western Museum in Los Angeles. The have honored the buffalo girls but this story is unique and important.

I LOVED THIS BOOK!

Wonderful story...wonderful performance. I didn't want it to end. The story of Charlie Parkhurst was one that I had not heard of before. The book was a wonderful history lesson embellished by a very creative author. Excellent performance by Robin Weigert.

What made the experience of listening to The Whip the most enjoyable?

The narrator, Robin Weigert, did a wonderful job developing her characters, with individual voices for each one. Not only did she carefully choose her voices, she was consistent, never faltered, and the children voices aged appropriately. Not only is the narrator excellent, the story was well-written, and the topic was very interesting.

She inhabits her characters faultlessly. She is so versatile... she believeable portrayed young children, black men, crusty stagecoach drivers, an Italian woman, and a cockney bandit. Each was fantastic.

This collaboration of author, narrator, and director created a believable, engaging audiobook. I listen to alot of them, and this one is one of the few which I really couldn't wait to get back into, whenever I had to stop listening.

I love reading about this time period and found the story engaging. I also thought the narrator did a really great job.

I thoroughly enjoyed this and have recommended it to a friend in a book club. The performance was superb and the story was intriguing.

Obviously, Charlotte, right as she decided to become Charley. This story is a great deal of supposition based on fact, but it was so interesting, that I wish it had ALL been true. I live in Santa Cruz County and travel daily on the roads that Charley road on. S/he has become a personal hero/ine to me.

Robin seemed to effortlessly juggle 3 personas back and forth in the same scenes with different dialects and different accents. Her voice even demonstrated the characters as they aged throughout the years.

If you could rename The Whip: Inspired by the story of Charley Parkhurst, what would you call it?

Waiting for the screenplay to be picked up by Amazon, Netflix, HBO or Comcast. Come on folks, get with the program!

That the book is based on an actual person makes it the more interesting. The period descriptions and characters were delightful. I could feel the sorrow and excitement. And was drawn into Charlies struggles.

What an amazing life she led!

I would definitely recommend this to a friend.

It was like listening to a play ! The narrator did a fantastic job of creating characters with her voice.

Would you recommend The Whip to your friends? Why or why not?

I found some of the plot to be predicable, but the unique character made it an interesting story. Not sure if this would be of interest to everyone. It's not quite a Western, not quite a historical drama, not quite a romance, although there are elements of all of these genres.

Have you listened to any of Robin Weigert’s other performances before? How does this one compare?

I believe this her only audio performance. I would definitely listen to others.

Was The Whip worth the listening time?

IN GOD WE TRUST, ALL OTHERS PAY CASH
This is more Historical and Literary, than a Western. While it is probably pretty close to true, it is extremely sad. It starts out sad, it's sad in the middle and it ends sad. Yet it is almost required reading. The things people have to go through when they are not treated as equals. Narrator is excellent.
THANKS FOR THE TERRIFYING COACH RIDE AND ALMOST GETTING ME BEAT UP IN THE BAR. I guess their is some levity.

Robin Weigert’s narration & multiple character dialects makes this book literally come alive! I’d love to see it made into a movie!! What I really wondered is how much of the book’s story was fact vs fiction: especially regarding the boy Charley grew up with at the orphanage—there were some things that were too far out to believe could happen to one person, in one lifetime! Wild and too often tragic. It sounded like many of her life secrets died with her. I’m still craving to know the truth, the whole truth about what happened! Thank you for writing this book Karen Kondazian:)