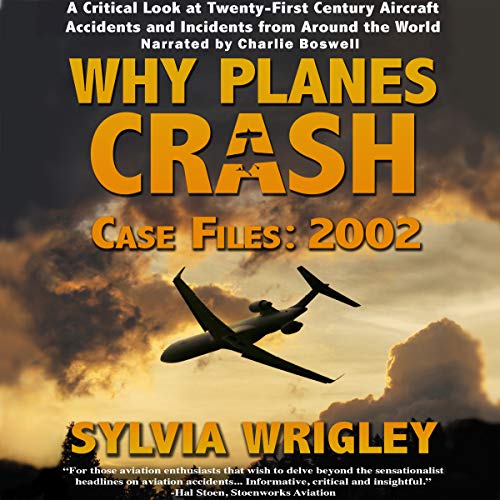 By: Sylvia Wrigley
Narrated by: Charlie Boswell
Try for £0.00

Air travel is one of the safest modes of travel when we take into account the distances and freedom that it allows us. And yet, we still remain obsessed with aviation disasters. What caused these accidents? Whose fault was it? In her series of books Why Planes Crash, Sylvia Wrigley investigates the worst aviation disasters of the 21st century.

Accidents are invariably a combination of factors, and pilot decisions and (in)actions can be the results of a culmination of those factors. A strong investigation will consider not only the cause but the contributing factors: those actions or inactions that could have saved the day but didn’t. The objective in accident investigations around the world is not to cast blame but to understand every aspect so that we can stop it from happening again.

The second book in the Why Planes Crash series covers incidents and accidents in 2002, including two in-flight suicides, the Sknyliv airshow disaster, how to write off a Saab 2000, an aircraft collision over the runway, a dramatic river landing, Air China 129's flight into a Korean mountain, and finally an in-depth view of the Überlingen midair collision.

Unravelling the mystery is the most important step.

What listeners say about Why Planes Crash Case Files: 2002

An investigator gives a hardy thumbs up!

Being an investigator, I’m bored by most investigative writing. Not here though. The book covered the facts in detail and in a way to keep my attention. The narrator did a great job as well. I’ll read more of this authors work and I’ll keep an eye out for this narrator’s work as well.