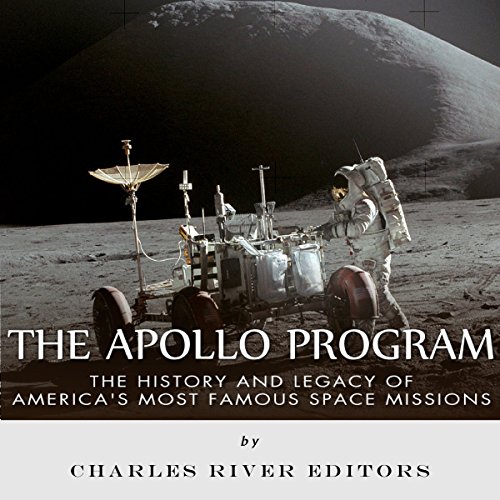 By: Charles River Editors
Narrated by: Bob Barton
Try for £0.00

The Apollo space program is the most famous and celebrated in American history, but the first successful landing of men on the moon during Apollo 11 had complicated roots dating back over a decade, and it also involved one of NASA’s most infamous tragedies. Landing on the moon presented an ideal goal all on its own, but the government’s urgency in designing the Apollo program was actually brought about by the Soviet Union, which spent much of the 1950s leaving the United States in its dust (and rocket fuel).

In 1957, at a time when people were concerned about communism and nuclear war, many Americans were dismayed by news that the Soviet Union was successfully launching satellites into orbit. Among those concerned was President Dwight D. Eisenhower, whose space program was clearly lagging a few years behind the Soviets’ space program. From 1959-1963, the United States worked toward putting satellites and humans into orbit via the Mercury program, but Eisenhower’s administration was already designing plans for the Apollo program by 1960, a year before the first Russian orbited the Earth and two years before John Glenn became the first American to orbit the Earth.

On May 25, 1961, President John F. Kennedy addressed Congress and asked the nation to “commit itself to achieving the goal, before this decade is out, of landing a man on the Moon and returning him safely to the Earth.” Given America’s inability to even put a man in orbit yet, this seemed like an overly ambitious goal, and it isn’t even clear that Kennedy himself believed it possible; after all, he was reluctant to meet NASA Administrator James E. Webb’s initial funding requests.

What listeners say about The Apollo Program

Five stars cannot tell you how much I enjoyed

Wow! Such a disappointment. Can I get my credit back? The first half is basically just a copy and paste from the Apollo 1 accident commission with totally irrelevant things like how long the secondary firemen took to get to the pad. There are a number of basic things which are just wrong, like the "lack of atmosphere on the moon being the main reason it is easier to takeoff", "the signal was received from the dark side of the moon" and "the LEM descent stage is dropped off like the stages of the Saturn V" (not exact quotes) All the content seems to be from secondary sources without adding anything that has not been present before

Hits all the important points, very interesting overview of the most important mission highlights. Digestible and Enjoyable, albeit missing general info on majority of the missions.