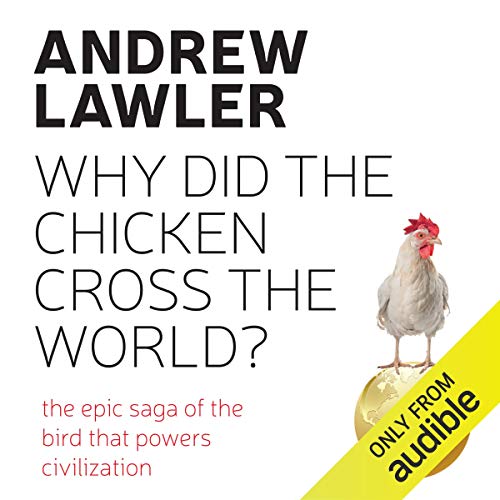 Why Did the Chicken Cross the World?

From ancient empires to modern economics, veteran journalist Andrew Lawler delivers a sweeping history of the animal that has been most crucial to the spread of civilization across the globe - the chicken.

Queen Victoria was obsessed with it. Socrates’ last words were about it. Charles Darwin and Louis Pasteur made their scientific breakthroughs using it. Catholic popes, African shamans, Chinese philosophers, and Muslim mystics praised it. Throughout the history of civilization, humans have embraced it in every form imaginable - as a messenger of the gods, a powerful sex symbol, a gambling aid, an emblem of resurrection, an all-purpose medicine, a handy research tool, an inspiration for bravery, an epitome of evil, and, of course, the star of the world’s most famous joke.

In Why Did the Chicken Cross the World?, science writer Andrew Lawler takes us on an adventure from prehistory to the modern era with a fascinating account of the partnership between human and chicken (the most successful of all cross-species relationships). Beginning with the recent discovery in Montana that the chicken’s unlikely ancestor is T. rex, this book builds on Lawler’s popular Smithsonian cover article, “How the Chicken Conquered the World” to track the chicken from its original domestication in the jungles of Southeast Asia some 10,000 years ago to postwar America, where it became the most engineered of animals, to the uncertain future of what is now humanity’s single most important source of protein.

In a masterful combination of historical sleuthing and journalistic exploration on four continents, Lawler reframes the way we feel and think about our most important animal partner - and, by extension, all domesticated animals and even nature itself.

Lawler’s narrative reveals the secrets behind the chicken’s transformation from a shy jungle bird into an animal of astonishing versatility, capable of serving our species’ changing needs. For no other siren has called humans to rise, shine, and prosper quite like the rooster’s cry: “cock-a-doodle-doo!”

“The planet's most populous and edible bird really does open a window on civilization, evolution, capitalism, and ethics. (Reading about it is lots of fun, too).” (New York Magazine)
“An encyclopedic examination of the chicken's ever-growing and complex role in societies and civilization.... Readers are sure to come away with a deeper understanding of - and greater appreciation for - an animal that's considered commonplace.” (Publishers Weekly)

What listeners say about Why Did the Chicken Cross the World?

Interesting if not a bit too long

Plenty of interesting facts and history, but too much unnecessary detail makes some chapters laborious and getting to the interesting bits can be a chore. Glad I read it, but if you're not that interested in chickens, you likely won't be.

Why did the Chicken become so boring?

Potentially interesting subject, but the author indulges in so much unneccessary detail, hyperbole and rambling that this is the most disappointing audiobook I have yet heard. Constant overstatement and repetition about the importance of chickens are so ridiculous that some sections become amusing, but even so it is impossible to finish this. Avoid.

chickens? Well, their history seems to be ours

Would you consider the audio edition of Why Did the Chicken Cross the World? to be better than the print version?

I enjoyed listening to the performance.

There is a section on the evolutional development of the chicken. The Cock ( pun intended and expanded on in the text) and its traits are entwined in human culture which is an absolute eye opener.

I would have given the time.

I've been telling my friends snippets about this book for weeks. They think me strange but the history of the chicken is inextricably linked with us. And this is a fascinating book delivered in an entertaining ( ok relatively) and accessible way.