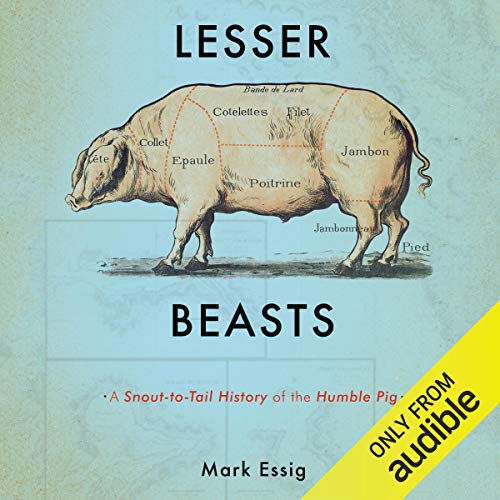 A Snout-to-Tail History of the Humble Pig
By: Mark Essig
Narrated by: Joe Barrett
Length: 7 hrs and 18 mins
Categories: Non-fiction, Environment
5 out of 5 stars 4.9 (7 ratings)

Unlike other barnyard animals, which pull plows, give eggs or milk, or grow wool, a pig produces only one thing: meat. Incredibly efficient at converting almost any organic matter into nourishing, delectable protein, swine are nothing short of a gastronomic godsend - yet their flesh is banned in many cultures, and the animals themselves are maligned as filthy, lazy brutes.

As historian Mark Essig reveals in Lesser Beasts, swine have such a bad reputation for precisely the same reasons they are so valuable as a source of food: they are intelligent, self-sufficient, and omnivorous. What's more, he argues, we ignore our historic partnership with these astonishing animals at our peril. Tracing the interplay of pig biology and human culture from Neolithic villages 10,000 years ago to modern industrial farms, Essig blends culinary and natural history to demonstrate the vast importance of the pig and the tragedy of its modern treatment at the hands of humans. Pork, Essig explains, has long been a staple of the human diet, prized in societies from Ancient Rome to dynastic China to the contemporary American South. Yet pigs' ability to track down and eat a wide range of substances (some of them distinctly unpalatable to humans) and convert them into edible meat has also led people throughout history to demonize the entire species as craven and unclean. Today's unconscionable system of factory farming, Essig explains, is only the latest instance of humans taking pigs for granted, and the most recent evidence of how both pigs and people suffer when our symbiotic relationship falls out of balance.

An expansive, illuminating history of one of our most vital yet unsung food animals, Lesser Beasts turns a spotlight on the humble creature that, perhaps more than any other, has been a mainstay of civilization since its very beginnings - whether we like it or not.

Packed full of interesting information. Read by Joe Barrett. What's not to like? Only the fact that after hearing this you will never eat supermarket meat again.

I learned so much.

It is well researched, well written, and well performed. 5 Stars all around - and will highly recommend to everyone I know.

I love pigs, as they're interesting and intelligent animals. This book taught me things that I hadn't already picked up from the internet. It gets... difficult to hear at times, as some things in life aren't all butterflies and unicorns, but still well worth the knowledge.

18 of 20 people found this review helpful

Story of the pigs and humans

Great book for those interested in history and animals. Definitely on my way to become vegetarian after.

20 of 23 people found this review helpful

who knew pigs did so much for the world? this was a pleasantly informative read, with a positive ending.

16 of 19 people found this review helpful

The dog and pig domesticated themselves. In the distant past, wild pigs came into early human settlements and stayed. Pre-Christian European societies loved the pig. Move into the desert areas and the pig was shunned. In England there were penalties for destroying oak trees as acorns made the best pig food.

What I found most interesting was the early European explorers would drop a boar and sow on an uninhabited island to make it into a future food supply stop. The Spanish conquistadores introduced pigs to South American. Essig claims it was the pig that allowed China to feed its massive population.

Essig not only covers the history of the pig but the anatomy, physiology, factory farming and the culinary arts of the pig. The book is well written and research. It provides all you would ever want to know about the pig in an entertaining and educational manner. Essig also reviews the religious views of the pig throughout history. I know that Winston Churchill is the most quoted person in the world, but I never expected to find a quote from him in a book like this. The quote is “A dog looks up to you, a cat looks down at you, but the pig looks you in the eye and treats you like an equal.” This book was a delight to read.

Joe Barrett does a good job narrating the book. Barrett is an actor and award winning audiobook narrator.

6 of 7 people found this review helpful

Exactly As The Title Says

This is literally a historical account of the pig,swine, hog, boar... Whatever you want to call it. Its history with people, who eats it and who doesn't (and why), and a history of farming the pig from antiquity to modern day.

Narrator did a fine job, but I had to take a star away for what could possible be the worlds worst Homer Simpson impression (it is unclear that the narrator has ever heard Homer Simpson based on it, in fact)

13 of 17 people found this review helpful

Fascinating look at the pig

It took some getting used to, but his unique and wry voice did the book justice and his accents and occasional characters (when quoting primary sources or literature discussing pigs) were wonderful.

Perfect blend of history and culture, evolution and culinary delight, class and society. I'll never look at bacon quite the same way. The author brings plenty of seriousness and rigor when explaining grave topics (from the current inhumane industrial pig productions to the role of pork consumption in religious persecution), but the general tone of the book is light and amusing. A great popular science/popular history book about the ubiquitous pig, and enough information to make any empathetic reader think twice before just buying the cheapest pork possible.

No more pork for me

Way too much lurid, nearly disgusting detail about the appetite of the pig, Repetition about the Middle Eastern peoples and pork, and their attitudes to the pig. Interesting passages, but lots to wade through to get there. Very interesting bits about "salting" the islands with mating pigs. And the army does march on its stomach....... Not my favorite "focus on" book. Sorry Mark Essig....

Really informative and interesting history on our relationship with pigs and consuming them. More of a history book than making any kind of obvious argument.

Lots of good info, interesting historical perspectives. Just dragged it out, and repeated parts... tighten it up and it’d be great.