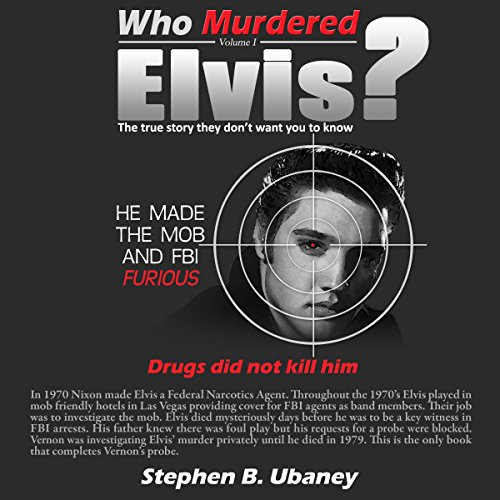 By: Stephen B. Ubaney
Narrated by: Richard Batson

It's shocking to learn that the first words out of Vernon Presley's mouth when he learned of his son's death were "My god! They've murdered my son!" It's even more shocking to learn that immediately following the funeral, Elvis' father accused members of the Memphis Mafia of murdering Elvis. Elvis' father wasn't alone; Presley's doctor, girlfriend, chief of security, and even some of his movie co-stars thought there was evidence of foul play. When Elvis' body was removed from Graceland to be taken to the hospital, criminal Investigators were immediately dispatched to the death scene; the upstairs of Graceland. When they arrived, the entire death scene had been sanitized. An investigation wasn't possible; who ordered it?

Meanwhile, back at the hospital, all of Elvis Presley's stomach contents were being dumped down the sink so they could not be analyzed. About this time, Joe Esposito, Elvis' road manager and group foreman had just told the cameras that he had found Elvis dead in bed! Two hours later, his story had changed. That night, the investigator's car was burglarized, and the only items missing were the notes and photos of the death scene. Thirty years later, an Elvis researcher was murdered on his way to give the key note speech at an Elvis Presley research conference. He had just purchased letters written by Elvis naming people who were threatening his life. The previously unpublished and unknown facts of Elvis Presley's death have been hidden for years, but now, finally, the truth must be told.

What listeners say about Who Murdered Elvis?

One of the biggest piece of dribble I’ve heard. It’s all supposition and I’ve read dozens of books, documents on Mr. Presley and some of the mixed stories were easily explainable.

Gives one something to think about.

It's a different twist and very plausible. Was Elvis murdered ? Quite possibly yet, we may never know.