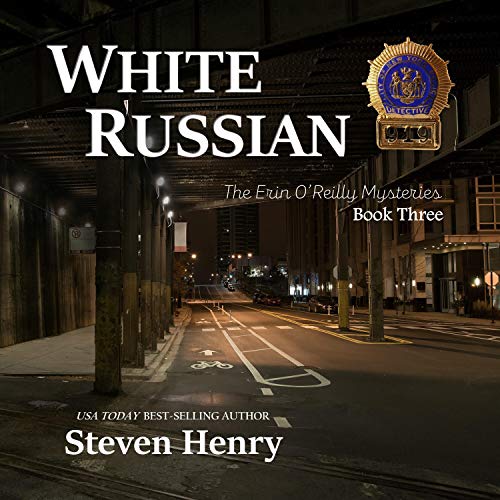 By: Steven Henry
Narrated by: Kristi Alsip
Try for £0.00

Not everyone who comes to America arrives by choice.

A man and a teenage girl are found dead in a bullet-riddled motel room. Evidence points to the Russian Mafia. This isn't the first time Erin O'Reilly has tangled with organized crime, but she isn't prepared for the sheer brutality that's waiting for her. She and her trusty K-9 Rolf peel back the curtain on a seedy world of human trafficking and murder. In the streets of Little Odessa, Erin finds men who won't think twice about killing a woman. And this is one place where her gold detective shield will be no protection.

What listeners say about White Russian

Like all three audios in this series (so far) the story is really interesting and engaging. The cast of characters is colorful, the atmosphere immersive, and the dialogue is realistic and often humorous. I highly recommend these for the story.

But the narration is very poorly done, and I can't recommend the audios for this reason alone.. The sound quality is tinny and sounds echo-y, the narrator herself mispronounces many common words, and her foreign accents are so bad they're funny. Her Irish accent in particular is of the 'magically delicious' variety which is not only a caricature, it's just insulting to the Irish. If you can't do an accent reasonably well, don't do it at all. My recommendation would be to have the series re-narrated. Failing that, switch narrators right here before you get further in. This poor narration quality is going to drag down the popularity of these wonderful books, and that does a disservice to book and author.

Don't forget, there are many audio listeners for whom reading is not an option; this will be their only way to engage with these wonderful books. It is very hard to find a K-9 police or military story that has a realistic interpretation of the human-canine relationship. Even harder to find one on audio; I have looked! Please make that experience as appealing as possible to as many listeners as possible and change narrators now.

I love Henry's Erin O'Reilly series. Can't wait to listen to the next one! Great stories and characters. Creative expressions and character development. Not heavy yet rich, believable, and well-researched. Just enough back story and internal processing, which do not slow down the read. and momentum. A cop and dog team, unique touch. Absolutely enjoyable!

Well written, seems very realistic same energy as the first two books, I think it's a matter of time before it becomes a move or limited run series.

This series is just as engaging as the first two books. Once again I have the feeling that this could really have happened. There are problems along the way but the "Major Crime Unit Detectives work together to solve the real crime.
Kristi Alsip Alsip continues doing an excellent job of narration.