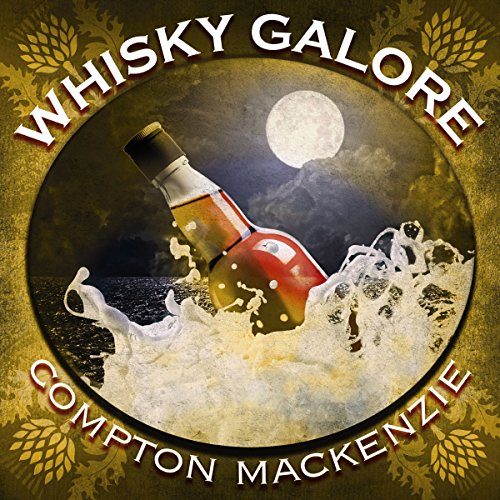 By: Sir Compton Mackenzie
Narrated by: David Rintoul
Try for £0.00

It's 1943, and the war has brought rationing to the Hebridean Islands of Great and Little Todday. When food is in short supply, it is bad enough, but when the whisky runs out, it looks like the end of the world.

Morale is at rock bottom. George Campbell needs a wee dram to give him the courage to stand up to his mother and marry Catriona. The priest, the doctor and, of course, the landlord at the inn are all having a very thin time of it. There's no conversation, no jollity, no fun - until a shipwreck off the coast brings a piece of extraordinary good fortune....

What listeners say about Whisky Galore

Despite their remote location, the Hebridean islands of Great Todday and Little Todday are not untouched by the ongoing Second World War. Some of the islands’ sons are far away serving in the forces, while various servicemen are stationed around the various islands. Rationing is in force, although the islanders always have their livestock and fishing to fall back on. But when there’s a prolonged shortage of whisky, things begin to get serious! When, after a few weeks of drought, a cargo ship full of whisky is shipwrecked just off one the islands, the temptation to steal the whisky before the authorities get there is overwhelming.

Humour is one of those things that is entirely subjective. Many people, according to the Goodreads reviews, found this hilarious. I’m afraid I found it occasionally mildly amusing, but mostly repetitive and rather dull. It takes about half the book before the shipwreck happens, and for most of that time we are introduced to a variety of quirky caricatures – an English writer’s affectionate idea of what Hebridean islanders should be like – and listen while they tell each other how awful life is because they have no whisky. I grant you that alcohol plays a large role in Scottish social life, and even more in our anti-social life, but not to the extent of it being the sole subject of conversation. I tired of it long before the ship hove into view.

There are a couple of other strands, both regarding romances. One is of an English soldier who has returned to the islands to claim the girl he proposed to a few years earlier, before he was posted abroad. But before they get married, they must have the ritual rèiteach – a kind of pre-wedding party. This leads to the running joke that I swear must have been repeated at least fifty times – that the Englishman can’t pronounce the Gaelic word rèiteach. He’s not alone – nor can I, but nonetheless the humour wore thin after the first dozen times he attempted it and failed. The islanders can’t imagine a rèiteach without whisky though, and so the couple can’t wed till the drought is over.

The other couple are both islanders, and the joke here is that the man is completely under his mother’s thumb, so much so that he’s afraid to tell her that he’s got himself engaged. He needs whisky to give him courage. (Mild spoiler: personally I felt the girl should be warned that the meek and mild model of sobriety she thinks she’s marrying turns into a bullying monster when he has a drink in him, but I think Mackenzie thought his drunken behaviour towards his admittedly irritating mother was admirable. Maybe that’s how men saw things back in those days...)

Mackenzie paints a picture of the lives of the islanders in which his characters seem to have endless amounts of free time and to do very little work, and, while he touches on the religious divides that have plagued Scotland for centuries, he does so in a way that makes them seem playful – I wish! However, despite its lack of realism it’s all in keeping with the cosy tone of the book.

I listened to the audiobook narrated by David Rintoul, who does an excellent job with the accents, and I assume also with the Gaelic pronunciations – I fear my ignorance of Gaelic means I wouldn’t know. There’s a fair amount of Gaelic sprinkled through it, which I would probably have found less annoying in a paper book with a glossary. But in an audiobook, not only did I not understand the words, I couldn’t work out how they would be spelled so that I could google them – it took me ages even to find the word rèiteach, despite it having been repeated umpteen times. Like a lot of Gaelic it is not pronounced how it looks! (My post title Slàinte mhath!, for example, is pronounced roughly slan-ja-va and means Cheers!)

Overall, then, a reasonably entertaining read, mildly amusing but, for me, not funny enough to make up for the lack of substance underneath. It could have made a great novella, but at full novel length there feels like far too much repetitive padding. Maybe I should have read it after a few drams of Glenfiddich…

something of a treat

classic story, with the narrator capturing the Ealing-esque tone, and the nature of the characters

A well known whimsical story sometimes seen on TV. The book is much better. Wonderfully read.

This is the best audiobook I have listened to yet.
If you don’t know the story already, you are in for a comic and touching treat. But if, like me, you’ve already read it, listen to Whisky Galore on audible and enjoy David Rintoul’s absolutely masterly narration. I can’t recommend it highly enough.

Humour Galore, the narrator MAKES this audiobook, a performance

whiskey Galore is a cultural baptismal dowsing the reader in Scotch whiskey, a story that starts w the lack thereof . If i could give this narrator 10 stars i would. A peaty, earthy voice with hints of burnt caramel and wood smoke. I laughed out loud often, occasionally to point of joyful tears, talented author