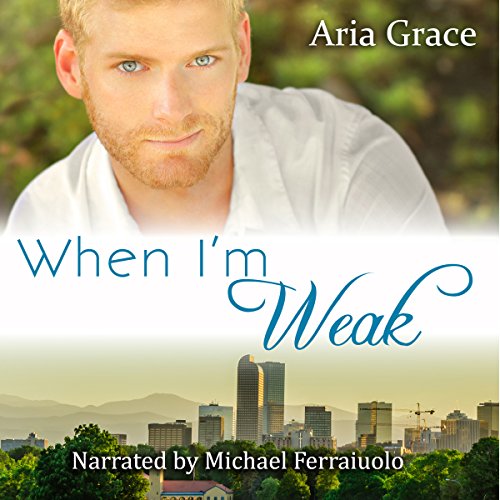 Reed and his sister run a home preschool for toddlers. His focus is on getting credentialed so he can take some of the burden from Lucy. He doesn't have time for friends, much less a lover, but when he meets Jamie, he recognizes something in the man that makes him want to get closer. Unfortunately, Jamie's past prevents him from truly integrating into Reed's future. It's not just a matter of the heart. It's a matter of the law.

What listeners say about When I'm Weak

I'm not quite sure how I felt about this book. I didn't love it but I didn't hate it either. It was just OK. But the ending is a HFN that gives an intriguing teaser for the next book. The narrator really made this book enjoyable for me. He really gave life to a story that had a few too many eye rolls for me to really rave about it. The basic story is Jamie gets screwed over (and not in a good way) when he was 18 and lost everything. So trust issues are a given. He meet Reed, likes him but pushes him away and the angst commences. I had to suspend disbelief regarding some of the situations and reaction of the MCs; such as Jamie getting assaulted and it is blow off as just part of his job. I don't think so. Maybe it is addressed in the next book.

Just because a book is a sexually charged romance novel doesn't mean that it cannot have a good plot with a challenging and insightful message. I am constantly and pleasantly amazed by this author and I look forward to reading more of her work. I am pleased that the author, Aria Grace, has tacked a difficult and often times considered a pariah subject such as the Megan's List of Sexual Predators. Whilst having such a list can be helpful in protecting children from actual sexual predators, there are times when it can be very unfair. I don't say this lightly but rather that one should be judicious in the use of said lists.

Registrants on Megan's List can also be placed on the list of Sexual Predators when they, who are just barely legal themselves, are caught with another individual who is only a few years younger then they are, as is the case in this story about Jamie who, after just turning 18, had such an indiscretion with a boy named Michael, three years his junior. He assumed wrongly that since the youth was at a casino that he was of legal age. He suffered for his actions for years afterwards. That is until he met Reed. He also discovered that a burden shared is a burdened halved. Jamie also discovered the true meaning of having a circle friends who cared for him and what the real meaning friendship. I recommend this book and this author because her work is insightful, well-written and emotion packed.

Love this author, love this series and want to have more!!!!