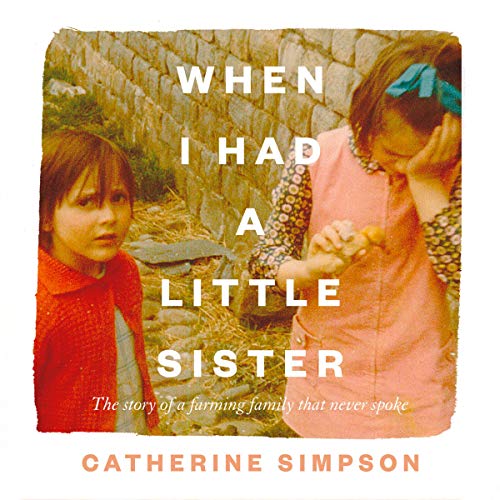 When I Had a Little Sister

When I had a Little Sister is a searingly honest and wryly heartbreaking memoir about a Lancashire farming family whose love of their land came hand in hand with the resilience to live off it. It’s a story of sisters and sacrifice, grief and reclamation, and the need to speak the unspeakable.

Did she know what she was doing?

On a cold December day in 2013 Catherine Simpson received the phone call she had feared for years. Her little sister Tricia had been found dead in the farmhouse where she, Catherine and their sister Elizabeth were born - and where their family had lived for generations.

Tricia was 46 and had been stalked by depression all her life. Yet mental illness was a taboo subject within the family, and although love was never lacking, there was a silence at its heart.

After Tricia died, Catherine found she had kept a lifetime of diaries. The words in them took her back to a past they had shared but experienced so differently and offered a thread to help explore the labyrinth of her sister’s suicide.

"When I Had a Little Sister, Catherine Simpson’s second book, carries a subtitle - 'The Story of a Farming Family who Never Spoke.' Don’t be fooled. This book’s secret weapon - alongside the strength and power of its story - is the remarkable voice that fires from the page to the heart with no hesitation at all. Just wonderful." (Janice Galloway, author of The Trick Is to Keep Breathing)

"Catherine Simpson’s memoir of her sister Tricia’s suicide mixes the coolness of her journalistic training with the subjective pain of loss in dreadful circumstances. But something else is on these pages: frustration and anger - with Tricia, with herself and with other relatives - that if only the family tradition of silence and the suppression of feelings had been challenged earlier things might have been different. In analysing the inherited values and habits of a lifetime, Simpson breaks the silence and liberates herself." (James Robertson, author of And the Land Lay Still)

What listeners say about When I Had a Little Sister

My own little sister recommended this to me and I have been charmed and sorrowful in equal measure.Coming soon after a bereavement it was balm to my sore heart and made me do very glad my own little sister, who has climbed a mountain to manage her own depression and anxiety, made it to the top.RIP Trisha and our beloved Mr Roy who so closely resembled Dad.

A lifetime of loss

This is a harrowing, poignant memoir of a family which didn't want 'mithering' by questions or expressions of feelings. It conveys brilliantly the whole family on their labour-intensive Lancashire farm where words weren't to be wasted on 'soft' talk. Children who laughed at mealtime were sent away from table. Catherine Simpson's grandfather never spoke of his time serving at Ypres and when his wife died in childbirth, their 12-year-old son(Catherine's father) was sent out to finish the milking. He never went to school again. Nothing was said.

Tricia was Catherine's youngest sister - her sweet companion as they wheeled dead runt piglets decked in clothes round in their dolls pram, but at around the age of 9 or so, Tricia started to withdraw behind her heavy fringe - the beginning of her un-talked about depression which would drive her to suicide, nearly 30 years later after episodes of tragic psychosis.

Catherine has explored her sister's life through diaries Tricia left behind. She's given us a crystal clear, warm, heart-breaking, insightful analysis of her family, stifled by their lack of words.

It's full of humour too which makes it enjoyable as well as sad. I loved the child's answer when told only a married woman could have a baby: "How does God know if you're married?" Mother's answer: "Stop mithering".

Not so much a 'reading' as Catherine talking to us. A great listen.

a poignant and cathartic journey

strangely close to my upbringing, yet so different. beautifully described and read by the author

Enjoyed seems the wrong word considering the base of this book. It was sad, thought provoking, informative and a sensitive tribute to a sister.

Doesn’t live up to the description

I felt frustrated at the unnecessary detail by the first few chapters. I’m deeply sorry for all those who struggle with mental health. I wanted to relate to this story by way of understanding how we struggle to have close and meaningful relationships with our family before it’s ‘too late’

I felt the descriptions of the mother’s passing and funeral were too detailed as they didn’t tell us anything about the relationships.

I wanted more of (or at least to get straight into) how her sister had felt the need to ‘hide’ /not show/share a most interesting and unique aspects of herself.

Maybe we get to that, but it was talking too long for me.

This book has changed my life, it has made me think about family and life, and at the end of the day we all end up the same, and all live similar experiences. Thank you for this book.

This is an excellent book which works very well as an Audio. It is honest unpretentious and unassuming.

Felt totally immersed in her story

Beautifully written, made me laugh and cry. Felt totally immersed in her life for a few hours, written with such honesty and emotion.