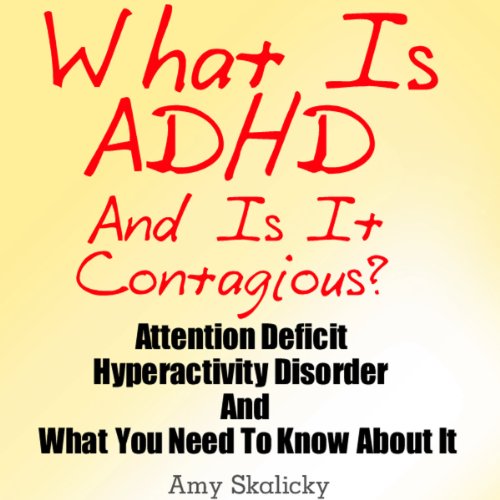 What Is ADHD And Is It Contagious?

Attention Deficit Hyperactivity Disorder And What You Need To Know About It
By: Amy Skalicky
Narrated by: Claton Butcher
Length: 1 hr and 16 mins
Categories: Non-fiction, Psychology & The Mind
5 out of 5 stars 5.0 (2 ratings)

What Is ADHD And Is It Contagious?

In spite of conclusive research and evidence, such as what have shared so far, produced by the medical, psychological and educational communities, there are skeptics who still cling to the claim that ADHD is not “real.” In spite of overwhelming evidence to the contrary, there are those who persist in voicing their opinions that ADHD is just an excuse for people who are lazy or sloppy, or to cover up for ineffective parenting.

There are also those who deny the existence of ADHD as an avoidance tactic to escape accepting their own diagnosis or the diagnosis of a loved one, usually their own child. This “sticking the head in the sand” approach is often characterized by statements such as “There’s nothing wrong with that boy. He just needs more discipline.” Or even “Oh, she’s fine. She’s just whining…she can do her homework just fine if she would only put her mind to it.”

One other popular myth is the belief that children outgrow ADHD. In reality, more than 70% of the children diagnosed with ADHD will continue to have it throughout adolescence, and 75% of those continue to need manage ADHD symptoms throughout adulthood. The current estimate is that 6% of the adult population has, most of whom are undiagnosed. Of those who do have formal diagnosis, only one in ten actively seeks treatment and management strategies.

really enjoyed the book , gave good insights into adhd and is a good starting point for further reading

Very informative about ADD, in both the biological and social context. Although I have read much on the subject, this book taught me much I did not know.
Well narrated.