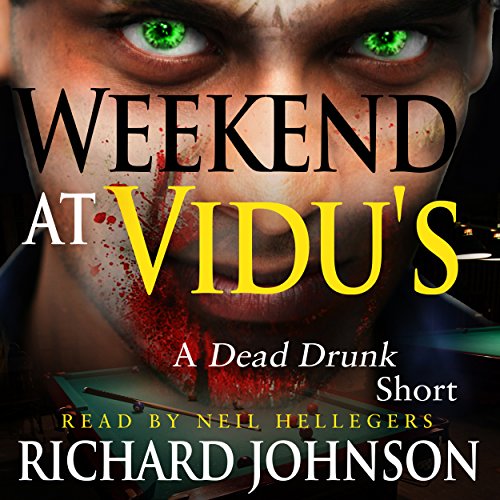 Vidu, a used-car dealer and d-bag extraordinaire, had been aimlessly wandering the streets of Chicago with only one thing on his mind… and that was before he got turned into a zombie.

Just when you thought you had seen the last of him, now you can find out what happened to Vidu after he left his friends behind during the pandemonium of Dead Drunk: Surviving the Zombie Apocalypse… One Beer at a Time. Humor, action, zombies, hangovers, gratuitous insults, and more Vidu!

This short story can be read as bonus material for fans of the Dead Drunk series, or as an introduction to the Dead Drunk world, where the only thing with more bite than the zombies, are the jokes.

What listeners say about Weekend at Vidu's

Even though I didn’t rave about Dead Drunk: Surviving the Zombie Apocalypse… One Beer at a Time, I still wanted to listen to more of the series. Why you ask?

Because there are very few humor driven zombie apocalypse stories out there. Were the protagonists are not the super sharp survivalists, preppers, or military heroes. This series is about a very lucky group of friends that somehow manage to stay alive during all of the chaos. Full of all the blood and gore, suspense and even a bit of wonder.

Weekend at Vidu’s is a very short quick and fast paced listen. Giving us another look into the madness that ensues, when from out of nowhere, zombies are everywhere. And no one is safe.

This is a fun series, but only if you are able to not take the zombie apocalypse too seriously. I am told that book two will be coming out soon and I look forward to hearing what Johnson can bring to the party.

Neil Hellegers was able to manage, in 24 minutes, a real sense of calamity. Delivering the story at a solid pace. Placing pauses at the perfect moments to add a bit of suspense. Clear and concise, a key to a successful performance.

I know this was a short, but I've loved the other stories in the series I just knew this one would rock it also...well I was disappointed. If this becomes a freebie go ahead and grab it. If nor, I'd let it go.