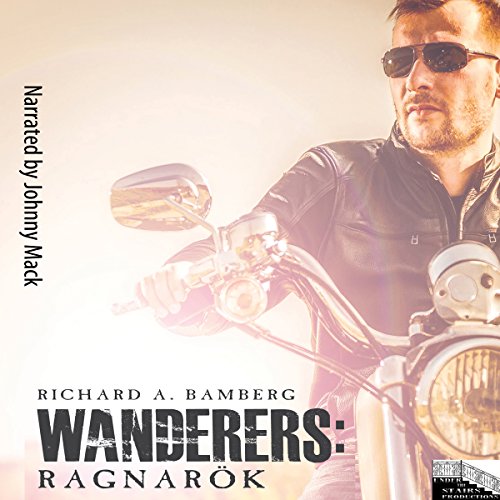 By: Richard A Bamberg
Narrated by: Johnny Mack
Try for £0.00

Alone and friendless, the Wanderers, servants of Fate, maintain the balance between the supernatural world and mankind's. For millennia the Wanderers protected that balance - but now a renegade Wanderer arises to open the doors between the earth and our greatest nightmares. Years ago Fate scavenged Rafe from the battlefields of Vietnam, handing him over to a mentor he barely knew before the rogue Wanderer slaughtered him. Skilled but only half trained, Rafe tracks down a warning from a naiad in Alabama only to find a coven of witches probing deeper into dark magics than they ever intended. Rafe must stop the witches from destroying the already fragile balance...but can he do it before the lovely young witch helping Rafe gets sacrificed for the greater good?

What listeners say about Wanderers: Ragnarök

Quite often these days, urban fantasy tends to end up being vampire romance or supernatural detective like the dresden files, luckily for me, this novel tends take more of the latter approach.

There is a varied cast of characters in the book led by the titular Wanderer named Raphael (or Rafe) Semmes, a man brought back to life to act as an immortal troubleshooter for the personification of Fate aid by his Manticore familiar named Beast who spends most of his time in the form of a Harley.

This opening novel in the series does a very good job of starting to explain some of the mythology, the mechanics and rules of magic in this book's world without overloading the reader right from the outset. The overall arc of the series and what are likely to be recurring plots were set down in this book, but were not pushed forward at the expense of a strong and entertaining main story.

One area that I didn't find as good was when the author seemingly felt obliged to try and appeal to the supernatural romance readers, these scenes mostly came across as somewhat tacked on and slightly superfluous to the overall story.

The performance of the narrator was a good one, the main characters all having their own distinct voices established already and I hope that he continues to read the rest of the books in this series when they are released.

In summary, this was an enjoyable book that also sets the stage for the rest of the series and I was eager enough to keep listening to it that I finished it in only a couple of days, whereas most audiobooks tend to last me nearer a week.

[Note - &quot;I was given this free review copy audiobook at my request and have voluntarily left this review.&quot;]

This action packed book, while set in a real location with a plot hatched purely from fantasy, tackles big themes such as predestination versus free will. Bamberg will fully immerse you in this world and take you to the brink of the end of the world.

I Want A Manticore-Possessed Harley!

I Want A Manticore-Possessed Harley!

This is the first book in the Wanderers Series. This is a continuing story line and characters, so even though it is not a cliffhanger at the end, there is also no HEA either.

♥ Story ♥
This story’s mythology is based around Norse traditions of the deities claiming fallen warriors as their champions. Most people are only familiar with the Valkyries, but just like the Greeks there were many deities to pray to that all came with their own entourages.

That’s where Rafe finds himself, as the minion of the Fate Verðandi. Who I have to say is pretty bad leading her Wanderers. Rafe has gone over 5 years without any contact or messages from her. As a Wanderer, he is to keep the status quo of good and evil by destroying demons that are causing havoc and disturbing this balance.

Rafe has been alone since his mentor was killed so is not in tune with the danger that is coming his way. Someone is trying to set in to motion the events that will lead to Ragnarök. For those that are not aware of what that is, it is the Norse equivalent of the end of days. It’s the final battle for the right to rule the world.

The mythology is solid, and there is a lot of action, but I feel like this title suffers from first-book-itus. Too much info dumped over too long of a time, pulled the story down with it. It’s still a good start to a series and I’m looking forward to the next one.

♥ Author ♥
This is my first read/listen by Richard A Bamberg and I think it’s a great start. Very creative world building. I’m very curious to see what book 2 brings.

♥ Narrator(s) ♥
Johnny Mack is great as always. I have listened to him in other books and he just has that perfect amount of gruff to his voice that can be both charming and sultry in the same book.

Ebook obtained through Kindle Unlimited.
Audiobook obtained for free at my request and I am voluntarily leaving this unbiased review
More Reviews @ GoodReads Id: AudiobookRomance

This story was a little slow grabbing my attention, but once it did, I thoroughly enjoyed it! I need to know what happens to Rafe next!

I received this Audible audiobook as an incentive for an honest review.

The narrator is definitely one that takes a bit of getting used to initially due to his gruff voice; it took a while for me to distinguish the fluctuations in his cadence, but by chapter 3 I was able to focus on the story-line more completely.

I enjoyed the mythology within the story; I have studied mythology a little and had never heard of Wanderers, so this was something new to me and it definitely incited my interest in the story. Moreover, Rafe's history has me 100% curious and leaves me wanting more!! Bamberg does a great job weaving a little bit of Rafe's backstory in with the current events throughout the book...just enough...LOL!

I honestly look forward to reading/listening to the other books in the series to hear different aspects of the mythological creatures and events Bamberg writes about! It's definitely one of my more favorite topics to read about!

KEPT ME FROM WANDERING!

I was provided this audiobook through Audiobook Boom at no charge by the author in exchange for an unbiased review.

A good narrator can make any book enjoyable and being a longtime fan of Gary Furlong, I knew I wouldn’t be leaving a poor review. This is my second Bamberg book and he hasn’t disappointed me yet. I was expertly introduced to a world of magic in which Raphael finds himself the last supernatural fighting for Fate and the balance between mortals and other dimensions. At the age of 60 he wears a barely legal age body that is somehow quite attractive to the ladies. He enjoys a few escapades between the sheets but Bamberg keeps the explicits from the story. I would like to see Raphael choose a “steady” and then heat it up a bit.

Okay, enough of THAT. Great story with very believable characters and not a lot of unnecessary factual baggage written. The story moves right along with adventure and situations left and right. It didn’t take much imagination to figure out the villains but the battle was epic.

Would you listen to Wanderers: Ragnarök again? Why?

Probably not since I have so many books to read for the first time just not enough time to reread!

If I had hours to listen at a time I probably could have!

I live to read. Haven't been read to since I was a little girl I am now hooked. Johnny Mack has an amazing voice that truely brings the characters to life the book itself is an amazing read Johnny makes it even More amazing Thank you!!!

Surprisingly fun, for the most part

I actually really enjoyed this, it was very Dresden-esque only with a talking motorcycle instead of a talking skull. The lore was pretty fleshed out, although a little smug about saying no one ever thinks of the Norns, but maybe that's just my ego. I liked the idea of the Wanderers a lot, enough to continue with the series and Is recommend it to anyone who likes urban fantasy with one caveat. Rafe was very promiscuous. It was kinda Gary Stu levels of "Everyone wants me and wants to be me." Most urban fantasy I know of has one, maybe two love interests at a time. The only exception I know of is Anita Blake from Laurell K Hamilton and there's a reason people stop about halfway through the series. That's why. This wasn't on that level but I could see it getting there if the author isn't careful, where the plot just limps you along to the next sex scene. Fingers crossed that the story stays strong when I delve further in the series but for now this is an excellent read.

I received a free copy of this book at my request in exchange for an unbiased review.

This was a great modern fantasy book. I enjoyed the concept of the servants of Fate and I loved Beast, Rafe's shape-shifting Harley! The narrator did a great job as well. So, this is a series I definitely want to dig into more.

Wonderful Fantasy with a shifter Harley!

not sure but I would be first in line!

Wanderers : Ragnarök by Richard A. Bamberg and narrated by Johnny Mack is an audible book I requested and the review is voluntary. I loved this story so much! Rafe had died but Fate needed him to fight those things unseen. He was trained by another that was chosen. His Harley is really a shifter, the real shape is a mythic beast. His name is Beast. He talks too. It is too funny at times. They end up in town and in the middle of something big! Right off the bat he lands in a mess, it is too fun! Lots of action, a mystery, adventure, fantasy, fighting, creatures, and more! The narrator is perfect too! Adds a lot especially to Beast! I don't like the cover because Rafe is suppose to look 20 or 21 and the cover has a middle aged guy with a receding hairline. This is not Rafe!

I got this ARC via audiobook boom. This was a fun read for me. I loved the way the Wanderer interacted with all that he met. The story was well written and filled with humor and several plot twists. The story was filled with scenes of magic use and suspense. I loved the narrator. he is up there with D C Cole for me. If you like magic with a little humor you will enjoy this book.