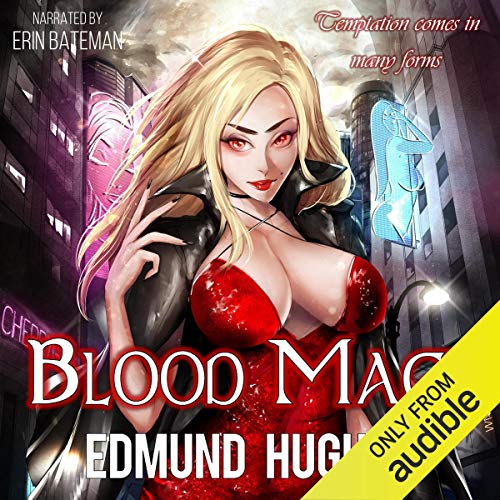 By: Edmund Hughes
Narrated by: Erin Bateman
Try for £0.00

It’s been 12 years since Jack Masterson last set foot on Lestaron Island. Fresh out of college and lacking a clear direction in life, he’s been asked by his aunt and uncle to travel back to the place he once called home to settle his recently deceased grandfather’s estate. Jack has little to look forward to in regard to his return, outside of a chance to reacquaint himself with Katie, his childhood friend and former crush.

When Jack discovers that his grandfather wasn’t broke after all, as he’d been led to believe, he’s surprised. When he discovers that most of the old man’s monetary assets have been left to him, along with the employment contract of a cute, young maid, he’s virtually dumbfounded.

And when an old enemy of the Masterson family decides to strike in the wake of his grandfather’s passing, Jack is the natural target. After being turned into a monster by a beautiful woman who claims to be his new broodmother, he’s left with a new outlook on life, one that strides a thin line of moral judgment. Dark magic, enthralling powers, and a thirst for blood that just can’t seem to be sated. Would it really be so bad to give in?

What listeners say about Blood Mage

some good parts, but overall bad

do we imagine a small Nantucket sized island is going to have a large number of muggers? i mean, muggings sort of rely on anonymity. who mugged you? George.

also, a deputy runs away and leaves main character in a bind because of monsters. he's mocked for it. no actual consequences.... no follow up. like hey, I know I left you fighting a missing person, what happened with that? he's not brought in for questioning after the fact. apparently case closed.

plus, there is a formula that makes you resistant to vamp powers. vampires are out to get you. why aren't you swilling that shit on the daily?

becoming a vamp makes your junk bigger... that was stupid and unnecessary.

maybe a vamp in the house... let me go change into my tight leather cat suit.

vamp on the loose, but I'm unwilling to let it affect my personal life.... so date night!

you are being plagued by blood lust and the regular kind of lust? meet me at the gym where I teach yoga for a pep talk. gasp! were you eyeing my friends!!!! I am shocked and disappointed!

too much makes no sense.

Not what you think.

If that "slow building harem" brought you here, keep moving. No harem here. Just your typical person bitten by a vampire, but instead of embracing it, they despise. Not to mention the typical OVERLY GOOD MC. "Even if they did try to rob, rape, and probably kill this person. Biting them just isn't right." Well letting them go so they can do more bad stuff isn't the RIGHT thing to do either. SMH!

Don't forget the childhood friend you left as a kid, but find out he/she is engaged when you reunite. If you've seen any romcom, twilight, and the vampire diaries. Then you can guess everything that will happen in this book. Oh! Give all the male characters a womans voice while your at it.

The story was a bit slow and silly. The main character went nowhere and the story line went nowhere. It has such great potential for this for what it was a story about a poor little rich kid who for some strange reason loss all those memory and everything else. A childhood friend which is in love with a coward police officer that is a bully for No reason. The main villain was basically just running around doing random acts of silliness . I felt like I wasted 7 hours of my time cause there was no climax nothing it was just running around pretending run around pretending running around pretending and the main captor feeling sorry over and over again about being a vampire. No one in the storyline characters of the wise ever really got to do conversation where to explaining from to anyone or to even the readers.

This was a great story, topped with a beautiful reading. now I'm going too have to listen to the rest of the story

The thing I love about Edmund Hughes books is the way he draws you into the characters life. Once again we are introduced to a character whom I find myself interested to learn more about and that I care what happens to him. I find that his problems are not black and white and are not easily solved. I found the mystery intriguing and the antagonists are frustrating and hard to just brush off. I am very interested in the upcoming books and found the narration excellent.

Couldn’t wait for it to be finished

It was extremely annoying how many bad decisions the mc was capable of making. At no point did it ever occur to him to sit any one of the other characters in the story down and have a complete “come to Jesus” conversation. A ton of inuendo’s which the mc seems to never pick up on and ask about. I get it the author wants to unveil parts of the story a little at a time but it’s done in a way which makes him look like a complete and utter idiot. Katie never accepts responsibility bc she at least had an idea of the danger he was in the first night and left him to fend for himself. Even after he inherits the kingdom there is no letter in the will from his grandfather explaining anything he should come to expect. An arguement would be, Katie should tell him. What if Katie died at the same time as Grandfather? The will and handling of his estate was crap. Thrown to the wolves as it were I would have been more than a little ticked at Grandfather and Katie. Still the idiot survives for several more books. That said, I did like the sex scenes if nothing else.

struggled to finish. The drama seemed a bit forced. the main character a bit whiny and lame.

suffer through 90%, and you'll be excited for pt 2

this story is completely idiotic. For now, until i do a real review ill leave you with the worst logic breaking idiocy of this book so far. The MC is bullied physically and mentally by his 10 year old crush for hours into the book even though he is in complete control the entire time... waste of a possibly great series i think. (will re-review more thoroughly upon completion of 2nd half.)

Most of the book is MC vampire wishing he could bite people and feeling sad about it sometimes biting people and then feeling bad about that instead. Throughout the book there are hints at past secrets, plot threads and side chars that are more interesting than the boring main chars with internal dialog drama problems. None of hinted at backstories or the villains motives are revealed by the end of the book

Slow start to a better series

==UPDATE Amazon/Audible recently changed how they format their reviews. While you can put paragraph breaks into reviews when composing them, they will no longer be displayed on an audiobook's review screen. So now my reviews have retroactively become barely readable. The only answer I've gotten from support is that this is just how Amazon wants it to be now, and they're sorry for the inconvenience. Since I'm too lazy to abridge my reviews, and our benevolent Amazon overlords don't give a shit, please enjoy the following wall of text. END UPDATE==

I almost didn't get this audiobook because I felt the cover art was a bit over the top, and the first reviews I saw were pretty negative.

Fortunately, I didn't let those things stop me. A lot of people get interested in these types of books to see a protagonist be the strongest dude and get all the ladies. Starting this series by finding out that the childhood friend and primary love interest is engaged to someone else is going to ruffle some feathers, if you're in that crowd. If you want to read about a "real man" that dudebro's his way to victory, has the emotional capacity of a Bowflex, and makes all the ladies realize that all the other men are beta cucks, there are plenty of other harem books to choose from.

I found the interactions between the protagonist and the childhood to be understandable, even if they don't all go the MC's way. He understandably butts heads with the fiancee, but understands he can't just Chad his way into replacing him in his crush's heart. He also does his best to respect the life she made for herself in his absence—if that makes him a wimp, I'm not terribly interested in reading about "real men." A couple other love interests are introduced, but this first book is mostly about the MC finding his place after learning there is more to the world than he thought or remembered. He doesn't always make the right decisions, but never displays the inexplicable stupidity seen in many indie harem books. And by the end of the book, he has a decent grasp on his abilities.

For those that care, he continues to sort through his personal relationships in upcoming books, gains more power, and finds himself pitted against tougher and tougher adversaries. Even if he makes bad decisions, they tend to be consistent with his character, and ends up standing up for himself and others more often than not, even when we'd understand if he didn't.

I found this book and series better written and more interesting than the vast majority of haremlit. It's not on the same level as, say, Daniel Black or Super Sales, but easily much more compelling than most harem books, particularly the cookie-cutter ones that release monthly and cater to a those that want the same story with a different coat of paint. And if you enjoy this book, you'll like the next books more.