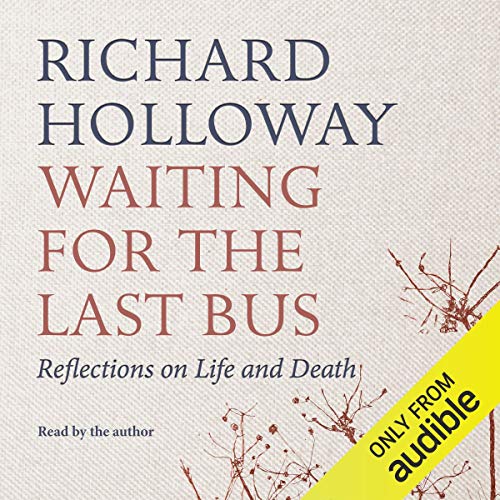 Waiting for the Last Bus

Where do we go when we die? Or is there nowhere to go? Is death something we can do or is it just something that happens to us?

Now in his ninth decade, former Bishop of Edinburgh, Richard Holloway, has spent a lifetime at the bedsides of the dying, guiding countless men and women towards peaceful deaths. In The Last Bus, he presents a positive, meditative and profound exploration of the many important lessons we can learn from death: facing up to the limitations of our bodies as they falter, reflecting on our failings, and forgiving ourselves and others. But in a modern world increasingly wary of acknowledging mortality, Waiting for the Last Bus is also a stirring plea to reacquaint ourselves with death. Facing and welcoming death gives us the chance to think about not only the meaning of our own life, but of life itself; and can mean the difference between ordinary sorrow and unbearable regret at the end.

Radical, joyful and moving, Waiting for the Last Bus is an invitation to reconsider life's greatest mystery by one of the most important and beloved religious leaders of our time.

What listeners say about Waiting for the Last Bus

Richard's voice has lulled me to restful sleep each night with deep contentment.Aho! Thank you.

One to revisit many times

Having read and enjoyed Holloway's Leaving Alexandria, and recently having heard him read from and discuss this latest book in St Vincent's Chapel in Edinburgh, I knew what to expect and was delighted with both content and reading. Holloway has a very distinctive voice. The subtitle, Reflections on Life and Death, is one to take seriously because there's more to this book than sepulchral introspection. At the Edinburgh event, I was impressed by Holloway's ability resonantly to quote verse at length and you'll hear in this book how important poetry is to him - and to us.
A sign of how time flies when your engaged in something: I was astonished to note that only 15 minutes of the book remained when I imagined I was only around half-way through. You can tell that Holloway really believes what he's saying; his reading is alive and holds the attention effortlessly.
Given that one of the things which concerns many people in their final years of life is the feeling of leaving little mark on the world, I feel that this is not a thing which will trouble Holloway. In years to come (hopefully many years) I'll be glad to have the sound of his voice to hand and, when my own hour comes, particularly on this subject.

I listen to Audible in the middle of the night, just the time to be thinking about that destination and the journey so far! The sonorous voice of a Scottish clergyman comes weighed down for me with memories of dismal childhood Sundays and dire warnings of where the bus might take us. But this was, dare I say, uplifting. Music and compassion, human frailty and second chances, joyful acceptance of the possibility of finality...it was all quite calming, even inspirational in that it does make room for a last fling of the dice, even as the bus approaches.Just one complaint. The inclusion of poetry and art, and readings from past funeral eulogies was fine in small doses but got a bit formulaic, reminiscent of the structure of sermons.

It is time to reflect

A book that I needed to listen to.
It helped me to take a break from life’s race and think what am I headed towards.
Death has always been a preferred subject to discuss with close friends.
I recommend this to anyone worried too much about life’s purpose.
There is no purpose. That’s when you realise you can add one to it.

Calmly read by the author, with a warm deep tone, this book is worth five stars.

I absolutely loved listening to Richard Holloway and would like my contemporáry elderly friends and younger family members to hear it.

Not much more to say. I’m 70, & can’t say that learned anything I didn’t already know, aside from a few definitions of Latin phrases. I was tempted to quit now & then, but the author seems such a pleasant person I just stayed with him.