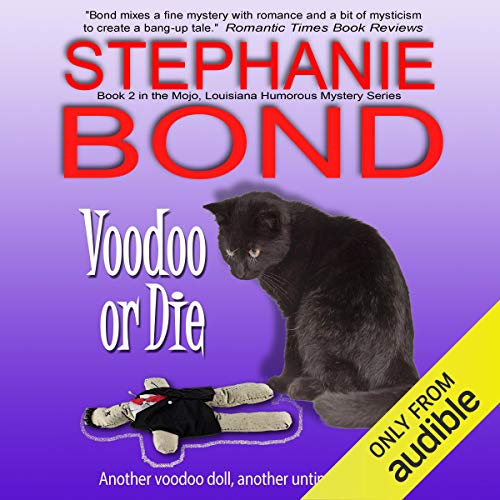 By: Stephanie Bond
Narrated by: Maureen Jones
Try for £0.00

You always find your mojo in the last place you look for it... When a female attorney relocates to the quaint town of Mojo, Louisiana to take over the practice of a dead man, she thinks the welcome gift on her office doorstep is sweet...until she opens it to find a voodoo doll! After a horrible death occurs that's a little too close for comfort, she can no longer ignore the power of the evil doll...and frantically realizes her secret past might be catching up with her.

If you're looking for a little magic in your life, read Voodoo Or Die!

“In this action-packed story, Bond mixes a fine mystery with romance and a bit of mysticism to create a bang-up tale.” ( Romantic Times Book Reviews)
”An entertaining tale with twists and turns that will keep readers guessing until the very end." ( Romance Reviews Today)
“Ms. Bond's characters come to life in this tense, funny, and passionate story. Reading her books always makes you smile, and this is no exception.” ( Huntress Reviews)

What listeners say about Voodoo or Die

the narration is painful to listen to

How on earth did they come up with the voice for the main character? She sounds like a uptight old spinster and this does not gel with the storyline at all

What was most disappointing about Stephanie Bond’s story?

Would you be willing to try another one of Maureen Jones’s performances?

Have listened to one other and that was entertaining

Did Voodoo or Die inspire you to do anything?

Yes turn it off without finishing it

In addition to odd pronunciations of some words, the narrator does a terrible job with voices, makes characters sound like poorly-done caricatures. Her rendition of the protagonist makes her sound like a pretentious biddy twice the age the story indicates. Much of the humor is lost in the narrator's poor delivery. I feel like the book would have been far more entertaining if I had picked up the print version.

Waste of a credit and 10 hours of my life

The story was superficial, the writing mediocre at best, plot was flimsy and cliched.During a scene describing a sexual encounter, the term is "his velvety knob" was actually used. Srsly? The characters are paper thin, and after a while, I could not keep them all straight; there is not really enough to distinguish one from the other.The protagonist is in the witness protection program, and supposedly has had years of training, but is constantly making references to her past life. She's been in WitSec for over 10 years, but upon meeting residents of the town she has moved into, she inexplicably introduces herself by her former name. The first half of the novel is full of improbable oopsies.Some horrific crime had occurred in the town prior to the character moving there, and constant references are made to "the victims and families", but there is never the slightest explanation of what happened. Maybe it is in another one of the author's books, but I found these constant references really annoying, and I have no interest whatsoever in finding out what happened.

What was most disappointing about Stephanie Bond’s story?

The characters were underdeveloped, the story flimsy and not really coherent, it was not funny in the least. And the ending was just too syrupy sweet and tidy-also completely and utterly predictable.

The narrator stunk, mispronouncing a few words; not a regional difference, but really screwing it up. Garage came out as "graaaadge" The protagonist's voice was awful too-it sounded like a bad parody of a vapid country club social climber.

No. It was wretched.

If I could give it negative stars, I would have.

Good story - did not enjoy the narrarator

What would have made Voodoo or Die better?

A different narrator. Mispronounced words and the voice for the protagonist sounded like an old lady with a sinus infection.

The plot was okay. Predictable...easy read that I can listen to while I work.

A southern narrator if the setting is going to be in the south. Learn to say garage and dour. You can go online and to the English Oxford dictionary and listen to how they are pronounced.

If you could play editor, what scene or scenes would you have cut from Voodoo or Die?

The sex scenes were tedious and to long. It's okay to leave something to the imagination. We don't need that much detail about who put what where and how they swirled it.

I will listen to more books from this author if there is a different narrator.

love love love it the only thing then narrator needs to learn how to say garage. your in the south learn the lingo.

Excellent second book in the series. I loved the character development, and how things evolved in Glory's life with a few surprises. I really how there is another book. I did this book in audio, which was excellent.

I would highly recommend this book and series.

"Gaa-raadge" stung my ears every time ...

... the narrator said the word. Her pronunciation was so askew that the next several words went unheard. I'd have to rewind the tape and listen again ("ga-raadge" included) to get the line. I liked the story and most of the narration, but the way of saying 'ga-raadge' was unnerving. UPDATE: I've been told that "ga-raaadge" is the British pronunciation (I'm an American). Even if I were British, I would find the sound to be unnerving.

As good or better than the first. I loved the characters, want more of Mojo.

A fun read with great characters and the audio was good. This is book 2. I'll be looking for Book 3.

The town of Mojo gets better with every story

After finishing the first book in the series, I immediately purchased this one and was not disappointed. I loved this one even better than the first one mainly because I felt more attached to the romantic story line in this one. I really wanted them to get the happy ending.

The author did a good job of keeping the quirky feel of Mojo but without having to read the first book before reading this one. The supporting characters didn't lose any of their spunk.

The only complaint I have on this book is the narrator's attempt at the "cover accent" of the main character. It could be a little distracting while listening to the book. I wish there were more books in this series to little to.

the book itself was great. my problem is thag the reader is obviously Canadian because she pronounced several words differently. and it made the experience inauthentic.