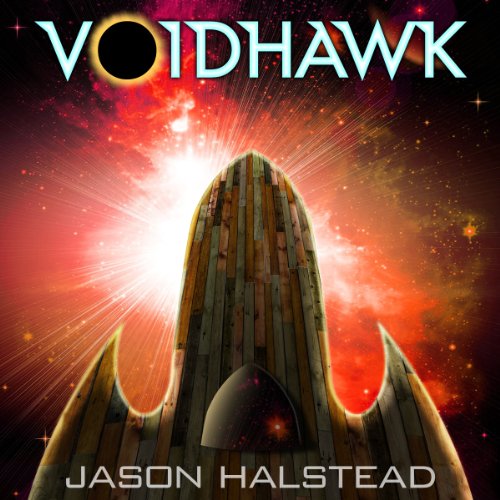 Too young and naive to care about the tensions between nations, Dexter Silverhawk considered himself the luckiest man alive when he found a derelict voidship hidden amongst some asteroids. Making it void-worthy and finding a crew to sail it seem like minor problems when he ends up in a Federation prison.

Rotting in a communal cell, Dexter's luck shows a fickle side when a mysterious elven woman is thrust into into his life. Helping her fend off an assault Dexter quickly learns that her mind and her tongue are weapons against which he has little defense. Unable to resist, he hires her at the first opportunity.

Surviving both politics, sorcery, and even ancient curses will force the growing crew of the Voidhawk to put aside their differences and work together. What remains for the young captain is the lessons of when to heed his mind, and when to heed his heart.

Would you listen to Voidhawk again? Why?

Yes...and I probably will. Because it's THAT good! Worth a second listen.

What was one of the most memorable moments of Voidhawk?

Ah...really can't say because it would give too much away.

Excellent job with the many voices.

Nope...too long. Really made some car trips fly by though.

My wife and I are both big fans of the all-too-short sci-fi series, Firefly. When listening to this we both noticed a lot of similarities to that show, which may be one reason we liked it so much. However it is also quite different in many ways. In this strange universe there are also dwarves, elves and other strange creatures...a little like The Lord of the Rings characters in space! It takes a big "suspension of disbelief" to accept many things in this universe but, once you get past that, there are wonderful characters and lots of "swash-buckling" space adventure. In short, we both loved it! This is the kind of book that could easily be made into a series...and we hope it is.

Would you consider the audio edition of Voidhawk to be better than the print version?

No, simply because it's so richly written with such a variety of characters. While J. Killavey does a very good job, the mix of characters, male, female, Dwarf, Elf and numerous others it's very difficult to get the same characterization the come aboit while reading.

What was one of the most memorable moments of Voidhawk?

When Kishira opened eyes for the very first time.

Have you listened to any of James Killavey’s other performances before? How does this one compare?

Unfortunately no, since he does a credible job.

Yes it is. With the variety of characters and the surprising situations ( wooden space ships) coming to grips with the physics and details of sailing the void ( bubbles of air, gravity and magic) it takes a little to get drawn into the tale. Consequently I found myself wanting to stay with it for a bit.

Ot's incredibly fun and creative. Yes it's different and a little unbelievable But if you're able to suspend some preconceptions it's great fun and a wonderful tale.

Great adventure after adventure, tied together by the background of each crew member and the developing romance between some of them. This is a very enjoyable listen.

I felt like it was a FIREFLY rehash. The character's personalities were Firefly personalities. The plot is so much like Firefly that it was eerie. From the Captain, who is misaligned but honorable to Roche (sp? due to audiobook) who has no honor to his character & you never knew if he would have your back unless it helped him. Still, it whiled the time away so it got 3.5 Stars. It was hard to get into at the beginning but all in all it was a FIREFLY Flashback.
I wonder if others who read or listened to this thought this?

Abandon Physics, All Ye Who Enter

Cute, during a Book Slump when I can't find much good that I haven't already read or heard...

Funny, As I listened to this, I kept hearing "Take My Love, Take My Land..." in the back of my mind.. I guess it's "Funny" because I own "Serenity Ranch, On Serenity Mountain" (so OF COURSE there's a "Serenity Valley") ;) I think you could follow this book along and name every Episode in the action.

Take the Races from Middle Earth, Set them on a Firefly-Class Transport (It's NOT really a "Firefly Class Transport", but it's definitely NOT an "Ant Class", or "Gnat Class" either), Take some action scenes from "Tremors", and dialog from MANY Short-Running Cult Classic TV Series (and a dead Jedi or Two) and put them together with NO "Physics".

Instead of the Universe being governed by "Physics", you have "Magic". Instead of "Space" you have "The Void"... think of it as "Space Lite"... Your "Void Ships" are Wooden Ships with Sails that fly through the Void via "Magic", but OF COURSE your ship is also a "Water Boat" and a "Covered Wagon".

In "The Void" everything has it's own gravity (no matter how large or small) and that gravity somehow causes a bubble of air to form around everything (Just get rid of all those "pesky problems" and get on with the action, Right? ;) ). You need a lot of money desperately, except that you always seem to have the ready gold to hand when it's needed to pay for those pesky supplies and repairs ("Money" falls under the category of "Pesky Problems" ) ;)

Lots of "Family Feelings" and "Feelings Of Belonging", Aboard.

I kept thinking "It's a Book, about Books/Movies inspired by Wars". J.R.R. Tolkien was inspired by his experiences before, during, and after, World War One. Whereas "Firefly" was Inspired by the American Civil War, and Zombie Movies were first inspired by people who saw the aftermaths of several wars...

The Narration was a bit strange.. "Saw" becomes "Saur", and an "R" seems to find it's way into every "W" as the Narrator tires before each stopping point.. but that's trivial. I DO wish the Narrator had better recording equipment... For some reason it makes me antsy to hear someone breathing in my ear before I go to sleep listening to a book, and the "P's" pop from time to time, along with some other things that are usually filtered out.

Dunno why it's listed as "Science Fiction" since A LOT of work went into removing ALL "Science" from the story.. Maybe "Void Fantasy" would be a better genre for this to be in ;)

I honestly wouldn't recommend it to anybody. The author appears to be unsure who his audience is. The threat of rape is used as a source of drama more than once, suggesting that the book is aimed at adults at the outset. However, the protagonist's inability to deal with attractive women, combined with the fact that he is at one point shot in the "bottom"--the author's word, not mine--for what appear to be comedic reasons, seems to cater to a rather immature, teenaged audience.

What was most disappointing about Jason Halstead’s story?

The world in which the story took place was neither coherent nor particularly interesting. In the almost three hours I gave this novel to prove itself, the cast of characters never advanced past two dimensions. The elves and dwarves were standard, off-the-shelf versions that offered no surprises, and the two main political powers--the nebulous Federation and the ill-defined Elven Empire--hardly seemed to be more than a footnote in the universe at large.

The author appears to be aiming for sexual tension between the male lead and the elf woman he meets in prison, but that tension never manifests due to the fundamentally poor quality of the characters involved.

The story even manages to rip *itself* off at one point. The crew's first job is offered to the protagonist by a Mysterious Buxom Woman who approaches him while he's in a bar. The crew's next major job, not even five chapters later, is brought to the protagonist's attention by a *different* Mysterious Buxom Woman who approaches him--you guessed it--in a bar.

The narrator had a regional accent of some sort that was difficult to pin down and even more difficult to understand, and his manner of speech made him sound more than a little like Kent Brockman from The Simpsons. There was no inflection to his voice to indicate sentences had ended, and frequent pauses in his speech occurred at odd times, usually mid-phrase.

Disappointment was my first response to this book. A flimsy world and flat characters turned what sounded like a great concept--Firefly meets Dungeons & Dragons--into a directionless and senseless mess.

Additionally, I felt incredibly irritated that the first significant interaction the protagonist has with his elven crewmember was *rescuing* her. She had proven herself very capable in the previous paragraphs discussing her history at the prison, so to have her suddenly rendered into a damsel in distress threatened with sexual assault was nonsensical and clearly driven by the writer's lack of creativity regarding how to bring the protagonist and the elf woman into contact.

If you're looking for a new and original take on space fantasy, or even just an *entertaining* one, I would recommend looking elsewhere.