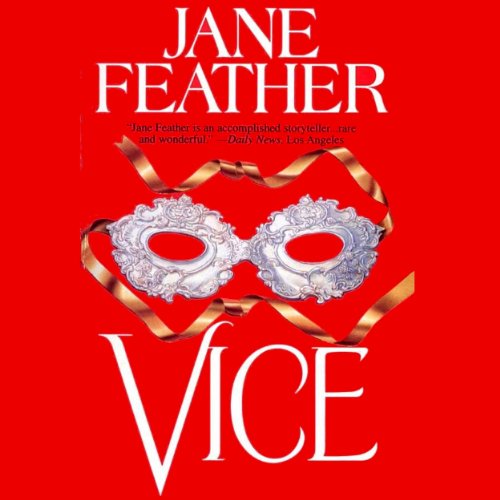 By: Jane Feather
Narrated by: Gemma Dawson
Try for £0.00

From the incomparable Jane Feather, author of national best sellers Vanity, Violet, and Valentine, comes this enthralling new romance of daring deception and forbidden passion...Juliana drew the line at becoming a harlot. She had already begun the week as a bride...and ended it as a murderess.

She was sure no one would believe that she'd hit her elderly groom with a bed warmer and knocked him dead quite by accident. So she did the only thing she could - she ran. Yet now she was in noposition to turn down a shocking proposition from the dangerously handsome Duke of Redmayne: that she become one man's wife and another man's mistress - his mistress.

Could she play such a role? Could she live up to such a bargain? And once she had tasted the pleasures of Redmayne's bed, would she ever want anything else?

What listeners say about Vice

Mildly diverting, as they say in Victorian England. Here's a heroine foolhardy enough for any hero's rescue. A greasy villain swarmy enough to set to stage. And hours of fantasy to distract you from the call of laundry & real life's drama. Get the bon bons & enjoy!

At First I Didn't Get It

As many reviewers write, sometimes JF hits the nail on the head and other times one wonders if someone else wrote the story! Initially, I thought this was one of the latter. As I read on I realized this book is written in somewhat of a farce form. Once I realized that I was able to get into the book and really enjoy the story.

I don't mean it is a true farce, but it has farce undertones. I'm probably doing a terrible job describing this, especially since I am one reader that don't ordinarily like farces, but trust me, it really is a great story. The pace is fast, the adventures kept me on the edge of my seat, and the steamy love scenes, well...they were great!

Like many of Ms. Feather's books, I found I did not like some qualities of the main protagonists, but there in lies her talent. You find you enjoy the book while disliking the characters! Pretty amazing ability in my humble opinion!

I highly recommend this book!