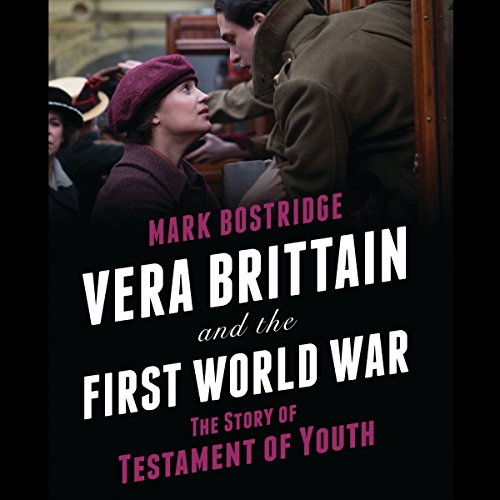 By: Mark Bostridge
Narrated by: Jilly Bond
Try for £0.00

Vera Brittain and the First World War tells the remarkable story of the author behind Testament of Youth while charting the book's ascent to become one of the most loved memoirs of the First World War period. Such interest is set to expand even more in this centenary year of the war's outbreak.

In the midst of her studies at Oxford when war broke out across Europe, Vera Brittain left university in 1915 to become a VAD (voluntary aid detachment) nurse. There she treated soldiers in London, Malta, and Etaples. The events of the First World War were to have an enormous impact on her life. Four of Brittain's closest friends, including her fiancé, Roland Leighton, and her brother, Edward Brittain, MC, were killed in action, sparking a lifelong commitment to pacifism. In 1933 she published Testament of Youth, the first of three books dealing with her experience of war. In equal measures courageous, tragic, and deeply fascinating, Testament of Youth is one of the most compelling and important works of war literature ever to have been written by a British woman.

What listeners say about Vera Brittain and the First World War

A moving portrayal of Vera Brittain and well narrated by Jilly Bond. Could she not be persuaded to read an unabridged version of Testament of Youth.

If you could sum up Vera Brittain and the First World War in three words, what would they be?

Two words: SO YOUNG! Vera and her brother Edward, and her fiance, Roland, and Victor and Jeffery were children fighting (Edward--a captain was 22 when he was killed and the rest as young) fighting a World War.

What was one of the most memorable moments of Vera Brittain and the First World War?

Poor dear Edward whom Vera loved beyond words--even more than the handsome wise talented Roland--turned this biography of Vera into a tragic mystery novel and the author into a detective. But I don't want to spoil the moment.

Vera writing the Testament of Youth with two babies on her hip living the life of a modern single mommy (George is gone half the year).

Everybody dies-- like a terrible tragic Greek play--Roland, Jeffery, Victor, Edward all at once and then her father and Winifred almost in the same month and finally Vera losing her precious, beautiful mind asking "Who is Roland?".

Vera hated her son. Her daughter Shirley did her best to keep family skeleton (Uncle Edward) in the closet.

Now read Testament of Youth but skip the first 100 pages--it takes Vera that long to get to the War. The ending of the book, you can skip that too. To Vera's complete frustration, George, her husband. forced her to edit himself out of the book but for his name.

Watch the BBC Vera Brittain Teleplay--but the major players are all too old for their parts--Vera is 29. In real life, Vera and her brother and three friends were teenagers, just out of high school (public school over there).

The latest movie pictured on the cover is too slick, too romantic--too much Roland and not enough Edward, whom Vera and her Father grieved for every single day, He commited suicide and she had her ashes spilled on his grave somewhere in the freezing Italian Alps.

For Vera Brittain fans this book will delight you. The First World War was devastating to so many. A great tragedy.