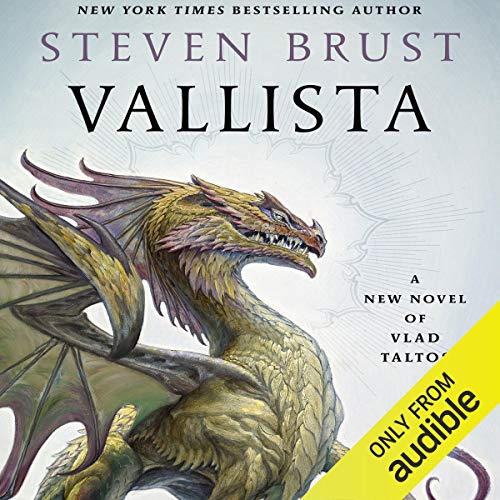 Full of swordplay, peril, and swashbuckling flair, Steven Brust's Vallista is a treat for longtime fans of this popular fantasy series, a deep dive into the mysteries of Dragaera and all within it.

Vlad Taltos is an Easterner - an underprivileged human in an empire of tall, powerful, long-lived Dragaerans. He made a career for himself in House Jhereg, the Dragaeran clan in charge of the empire's organized crime. But the day came when the Jhereg wanted Vlad dead, and he's been on the run ever since. He has plenty of friends among the Dragaeran highborn, including an undead wizard and a god or two. But as long as the Jhereg have a price on his head, Vlad's life is...messy.

Meanwhile, for years, Vlad's path has been repeatedly crossed by Devera, a small Dragaeran girl of indeterminate powers who turns up at the oddest moments in his life.

Now, Devera has appeared again - to lead Vlad into a mysterious, seemingly empty manor overlooking the Great Sea. Inside this structure are corridors that double back on themselves, rooms that look out over other worlds, and - just maybe - answers to some of Vlad's long-asked questions about his world and his place in it. If only Devera can be persuaded to stop disappearing in the middle of his conversations with her....

What listeners say about Vallista

this was another great sorry about Vlad, and one that kept me thinking. It was fun, funny, and had a very satisfying ending. What more can ya ask for?

One of my favorite Vlad books, this is on a smaller scale than Brust's recent works, which is refreshing. Lots of backstory and intrigue with good doses of humor and the continuing evolution of both Vlad and the Empire. it's a breath of gothic sea air. As always, fantastic reading and an excellent pace from the narrator.

I truly wish all audiobooks were as enjoyable as this. I found myself looking forward to my hour commute everyday just to listen.

Thank you again for allowing me to spend time with my favorite sarcastic anti hero/hero. Never enough.

I have been looking forward to the next instalment of this series for time. Excellent book! Everything I wanted and more.

Little advancement of inter-book story except for one brief conversation with Vera. Uninspired. And, sorry for this,, boring.

Really good story. Vlad is wittier than ever. My only complaint is the same as in previous reviews of Mr. Clark’s performance of the material. He REALLY, needs to refer to the glossary of pronunciation that Steven Brust included in the first Vlad Taltos novel, Jhereg.

An enjoyable dip into the horror/mystery genre.

Brust likes to touch on a different genre with each of the Taltos books, and this one is very much in the mystery vein, with a touch of classic horror. My biggest gripe is honestly with Clark's performance. If you listen to all of the Taltos books in publication order, Clark is pretty consistent in his base voice up until Hawk (where it changed even before the event in that book that could justify a change), and here it changes again. This wouldn't be bad, except if you're marathoning the entire series, you get very comfortable with the voice(s), and then it shifts in Hawk. And then shifts _again_ in Vallista. In Hawk, Clark sounds like he's getting over a terrible cough, with his voice gone gravelly. In Valllista, it sounds much more nasally, almost dipping into an Inspector Gadget-kind of inflection nasal tone. Though he dips back into his more classic Vlad narration tones often, which I guess makes it inconsistent. Which is weird, because Clark was fantastic in all the pre-Hawk books. On its own, it's not bad, but if you're marathoning the entire series, Vallista contrasts sharply in audible tone from the other books. Still looking forward to Clark's performance of whatever comes after Vallista, of course.

I grew up reading scores of fantasy. I revisit those series on occasion, but none of the authors can hold my attention like Brust. The narrator does an outstanding job with the voices, especially Taltos & Loiosh. I hope the author breaks his own rule and writes Taltos books for decades more.

A little slower paced than most of the series, but still all the Vlad fun you want.