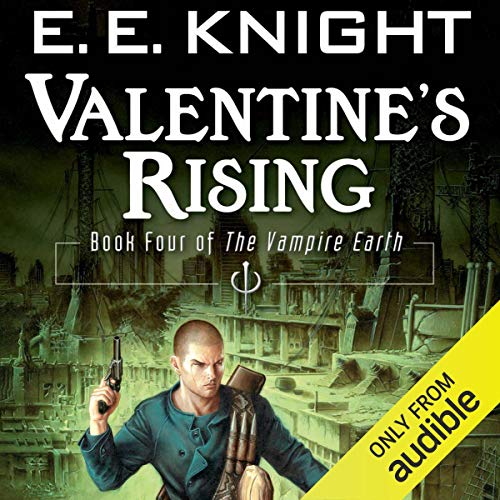 Possessed of an unnatural and legendary hunger, the Reapers have come to Earth to establish a New Order built on the harvesting of enslaved human souls. They rule the planet. They thrive on the scent of fear. And if it is night, as sure as darkness, they will come.

Ozark Free Territory, 2071: The Kurian Order has reigned for 50 years. Using the dreaded power of their Reaper avatars, the alien, vampiric Kur hold dominion over the Earth and its inhabitants. Yet there are those who would rather die fighting than surrender to the unquenchable thirst of the enemy - those like David Valentine .

Returning to the Ozark Free Territory, Valentine is shocked to find it overrun by Kurians under the command of the merciless Consul Solon. In a bid to turn the tide, Valentine leads a courageous group of soldiers on a desperate mission to drive a spike into the gears of the Kurian Order. Valentine stakes life, honor, and the future of his home on a rebellion that sparks the greatest battle of his life - one that he may not survive...

What listeners say about Valentine's Rising

More of the same - but that's a good thing!

I stumbled onto the Valentine series a while ago and have faithfully followed it from the first book through to this one (Valentine's Rising).
Some have complained that the series is a bit rough. That may be true - but the characters are engaging and the world very interesting (if dark).
If you are a fan of post-apocalyptic worlds and science fiction you are likely to enjoy this series. The Valentine series also has a very epic span. Personally I found it immersive and very enjoyable.
Are you a Wolf, Cat, Bear or a Quisling? Listen to the books and I'm sure you'll form an opinion!

The very best of Vampire Earth!

Read this book.In the first three books Mr Knight develops an incredible future Earth where old myths gather new and cohesive explanations that make stories about vampires, berserkers, Native American legends, holey artifacts and trees, and other long ago oddities into a believable whole. He chronicles the life of a hero from his teens tbrought the angst of a constant war between humanity and a race of nearly immortal beings that knock man off the top of the food chain. Each book further develops the characters more deeply--exploring the very best--and the shameful--thoughts that make every human such a mixed bag of hero and villain. I've read this series many times--and this book is always my favorite. Non-stop white knuckled action told by Mr Rummel in perhaps his best performance (and he has lots of good performances!) This looks like a pulp fiction style novel from it's description--but it isn't; this is excellent literature with thought provoking but realistic (though fantastic) scenarios. Read it the first time for non-stop action, then come back and find that this author not just a good storyteller, but a clever and skilled author as well. Read this series--and in particular this book--I can't imagine any fantasy / science fiction, action / war, or thriller story fan not enjoying this. It rocks. All the way through.

Humanity at it's worst in war, but at it's best in the selfless individuals laying down their lives for their fellow soldiers, and commitment to freedo--just as our soldiers do every day.

I most enjoyed the end--so would be a spoiler!

There is a minor sub-plot over the past three books, where despite incredibly unfair, selfish and unjust treatmen resulting in an end to Valentine's career dreams --results in an understandable grudge. But when fighting for the good of his men, Valentine sacrifices that grudge, much as he would sacrifice his life for his fellow soldiers. This was very thought provoking to me.

A Solid Series, Well worth the credit(s)!

Well written and well performed sci fi. Although the plot is old (aliens having taken over the earth and the survivors continue the battle), this series was pretty refreshing. Good characters, intelligent story telling that doesn't drag, reasonably good balance of action and character development. Its not a five star, but worth the credits as the series will provide you with many hours of entertainment. Definitely recommend starting with book one of the series for best reading/listening.

Great story, Great author. It is absolutely worth the purchase and read. It has adventure, humor, drama, all that you want in a book. You wont be disappointed.

Where does Valentine's Rising rank among all the audiobooks you’ve listened to so far?

The whole vampire earth series is addictive. It is interesting and since this is the fourth of the series I think it above the middle of the pack but not at the highest level.

There were several very intense scenes in the book that were well written I won't give them away but you'll know them when you listen.

So far an entertaining series. I will listen to another one soon.

Great listen, a little slow in the beginning

What did you love best about Valentine's Rising?

There a conflict between what he knows need's to be done and what he is willing to do. "DO THE ENDS JUSTIFY THE MEANS" there is a point where he has to make a choice the life of a new born baby for all the lives of his command around 600. Not counting all the pensioners he will rescue later total # 1400 people. This is a question that has plague the minds of many commanders in WAR. The author is trying to make this as close to realistic as possibly.

The interaction between the people, it seems it could be real.

Have you listened to any of Christian Rummel and E. E. Knight (Introduction) ’s other performances before? How does this one compare?

overall it does compare very well, my only issue is how short the books are. i am use to much longer book 20hr plus .

i have read the others and again great stories.

Sometimes, deception is the better part of valor.

In the aftermath of overwhelming defeat, David Valentine gathers up a crew of survivors and tries to make for the remnants of Free Territory. Low on men, supplies and weapons, their chances look slim, so Valentine hatches a plot to get his men fed and supplied with weapons. If they can't beat the enemy, they will join them long enough to get guns and a mission to be 'the advance force'.

They come close to pulling it off, but living inside the enemy camp requires Valentine to make too great a sacrifice, and all hell breaks loose.

After listening to this book, I don't know if the author went crazy or started sleep writing without know what he was doing.

This goes back to the previous books as well but THIS BOOK topped it. Something happened in this book that is unforgivable and it pisses me off to know end the Author made lite of the action.

David Valentine is on the short list of mine for being the worst protagonist ever. He is the very definition of being a hypocrite in all the books. To put it in book terms he is a Quisling. The some of the crap he does over and over and they the Author and story just blows off what he just did, he is so far over that grey line its sad.