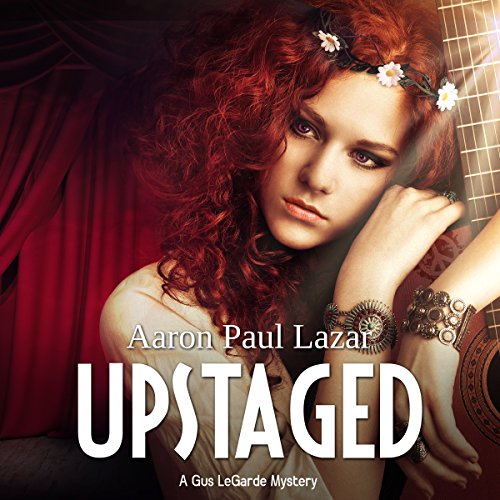 When Gus LeGarde agrees to play piano for the high school drama club's production of "Spirit Me Away", a '60s-style musical he wrote in college, he doesn't expect to face a barrage of menacing pranks played on his fiancée, Camille, and the drama club.

Who's sabotaging the show? And what do they have against Camille? Is it sex-crazed Armand, the Latino teen infatuated with her? Something happened last year that Camille won't talk about, and it has to do with Armand. Gus wants to know what happened, but she's not talking. Could it be Superintendent Marshall, whose past holds horrific secrets related to one of the worst crimes of the 20th century? And why did someone break into Camille's home to steal her beloved mini-dachshund, Boris?

Gus must unravel the mystery before the backstage saboteur stakes his final, deadly claim.

" Upstaged left this reviewer applauding!" (Joyce Handzo, In the Library Reviews)
".... Upstaged is a first-rate mystery that makes the reader want to immediately grab all the other books in the series. Lazar is a talented writer with a heart and an eye for mystery." (Shelley Glodowski, Midwest Book Review)

What listeners say about Upstaged

Wow what a totally fantastic audiobook from the pen of Aaron Paul Lazar and narrated by Robert King Ross.
I'm so going to have to get this full set xxxxx

Okay, only two books into the series and I am totally hooked! The content is wonderful, though I could do without some of the language. The characters are fascinating and likeable; the humor is just like I prefer it; the mystery intriguing; the narration is superb! On to the next book!

Would you listen to Upstaged again? Why?

I would listen to Upstaged again because I enjoyed it so much with the added musical sections. I've never listened to a book that offered this special effect. I felt even more involved in the character's lives.

What was one of the most memorable moments of Upstaged?

It's not often when listening to or reading a book that the most memorable moment comes at the very end of the story. I can't "spoil" this review by explaining what happened but I can say that I was amazed! I didn't see it coming!! The listener or reader will not be disappointed by the final twist to this book!

What does Robert King Ross bring to the story that you wouldn’t experience if you just read the book?

Robert King Ross has a unique voice that exudes many subtle qualities. I've never listened to someone whose voice tone barely changes but manages to reflect humor, excitement and sensual scenes in such a way that it makes my toes curl up !!

I always want to listen to Aaron Lazar's books all in one sitting ! His books are so compelling, exciting, fun, sexy. I find myself using my Bluetooth headphones throughout my day and evening--even when the television is on I listen to my book if the show is boring. I'd rather "watch" what is going on in my mind ! Aaron's books are much more creative than most shows on cable. The main character Gus is such a "Superhero" to me in so many ways. He's the epitome of a true gentleman. My definition of a gentleman is a man who is thoughtful and kind. He is a man who knows how to make a woman feel special and protected and loved. He loves his children with all of his heart and spends time with them. He can step in at a moment's notice and help someone in need even if it means he has to get physical and risk his own life. Gus has all of these qualities and more. In each book he continues to surprise me with his charm, wit, worldly knowledge and courage in the face of danger. He's a man's man and also a woman's man in every way !!

I will be forever grateful to Aaron Lazar for his gift of his stories. I have found a renewed interest in my life that was previous lacking in passion--passion for life itself !! I feel as if I have gained so many new friends in his books. I think about the stories even after I have finished the books and the memories made while listening to his books will last forever.

Aaron Lazar is a skilled writer who weaves the details of reality into his stories; his characters are people I'd love to know. Gus LeGarde is one of my favorites, and his love for his family and genuine kindness shine through--a good man who takes care of those who come into his circle.

The lovely singing voice added to the story and provided welcome breathing room to the tension-filled plot.

Sigfried stays true to his character, which is wonderful, and I loved Cindy and the others. Their personalities are well done and each is unique and distinct. Camille is the most layered character, with new facets and secrets revealed as the story unfolds.

Robert King Ross's laid-back voice kept some of the scenes from descending into melodrama--he was just right for this book.

The story held my attention from beginning to end. I thoroughly enjoyed this book and recommend it. I'm looking forward to my next Lazar book.

Where does Upstaged rank among all the audiobooks you’ve listened to so far?

An avid audiobook listener, I found Upstaged to be a multi-faceted mystery book. Aaron Lazar brings his characters to life and makes his villans vile and helps us love the good guys. As I live in the same vicinity as Aaron, it was fun to be able to meander with his characters in my mind as they went to different places that I know.

Which character – as performed by Robert King Ross – was your favorite?

I loved that there are such a variety of characters - Cindy and Siegfried who have disabilities but are not defined by what they cannot do. I wondered if Aaron knew some of the mom's in my hometown when I read about Agnes Bigelow the mentally unstable stage mother. His kindness and tolerance come through his writings in his dealings of the gay young man, Nelson Santos.

Robert King Ross' rich voice is the perfect vehicle for spiriting one into the world of Gus LeGarde.

Yes and I nearly did!

Upstaged is not so much written as orchestrated by Aaron Lazary. He brings so many disparate characters and situations together that the book mimics the bumps and traversings on the road of life. Gus LeGarde is helping out with a musical and getting married while he is remembering about the wife he lost and while working full time. We are treated to songs sung by the beautiful voice of Aaron's daughter Melanie woven throughout the book. There are beautiful scenes and delicious dinners. But most of all there is the pervasive kindness and love for other beings that permeates the book.

This was my first introduction to the writings of Aaron Lazar. My first order of business after finishing this review is to load my Ipod with more or his writings!

Upstaged is a Winner!

I really like this audiobook! The plot is so good! Someone is out to sabotage a high school musical. Someone is committing malicious acts. Who is it and why? As the story unfolds, the family at the center of the book enjoys the simple pleasures of life; nature's bounty from their garden, meals with family and friends, additions to their family, and cherishing their children. The listener feels like they are part of the family and experiences vicarious joy and fear. This audiobook even has songs to accompany the descriptions of the musical production. Aaron Paul Lazar is a gifted author and takes the listener on a journey! I would highly recommend this audiobook to other listeners!