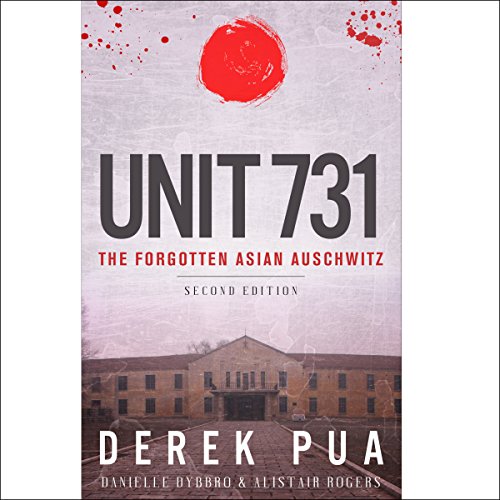 "Unit 731: The Forgotten Asian Auschwitz, by Derek Pua, is not for the faint of heart. It is, however, for anyone wanting to more clearly understand the extent of Imperial Japanese war crimes. This brief, dispassionate, and factual book outlines the creation and development of Unit 731, an organization that employed thousands of Japanese scientists who conducted nightmarish experiments on an untold number of human guinea pigs, all in the name of medical research.

"Even if one cannot stomach the details included in Unit 731: The Forgotten Asian Auschwitz, a basic knowledge of these atrocities should be more widely known, if only in the hope that history will never repeat itself in this horrific manner." (Kathryn Atwood, author, kathrynatwood.com)

The Japanese invasion of China during the Second Sino-Japanese war has left a strong legacy of hate and disgust among many Chinese today. Much of the atrocities committed by the Japanese are now known to most historians. By far, the most despicable and forgotten act against humanity committed by the Imperial Japanese government was its covert biochemical weapons program. Euphemistically labelled as the "Epidemic Prevention and Water Purification Department" of the Imperial Japanese Army, the Japanese conducted a wide range of cruel and inhumane experiments on prisoners who were often innocent.

Under the leadership of Dr. Shiro Isshi, the department subjected three thousand to 250 thousand innocent men, women, and children to cruel experiments and medical procedures that were carried out by the brightest medical students and staff that Imperial Japan had to offer. In a bid to develop its own germ warfare capability, the government of Imperial Japan resorted to incredibly deprived and inhumane methods of experimentation, like infecting prisoners with virulent strains of anthrax, plague, cholera, and other diseases. These prisoners were often subject to excruciating vivisections without the use of anesthesia in order to observe the real-time effects of these deadly diseases.

What listeners say about Unit 731

A boring depiction of hell.

Short summary of the atrocities committed by the japanese army/researchers in search of weapons to win ww2.
They somehow managed to make a horrifying part of history sound like a math textbook.
This audiobooks needs a pause between chapters, i can't even differentiate between this chapter and the next one.

I had never even heard of this! stumbled upon it. with what is happening in the world right now with covid-19, its an eye opener for sure!!!!!😮

I only learned about Unit 731 in my Graduate work. What is written in this book is just the beginning of what, hopefully, will come to light as time goes on. Unfortunately, those who have suffered are dying as well. In case you're searching for a short read, this is ideal for you! I'm not a major peruse, but rather this book got me snared on it! Exceptionally keen and enlightening. Would suggest.

An excellent audiobook for me. I'm satisfied with this audiobook. Derek even focuses on the uncontrolled denialism and obliviousness found in Japan today on this gathering. Much obliged to you, Derek.

I had never known about these monstrosities and think it basic that others gain proficiency with these accounts to have a total image of what occurred during WW II. This book can open a conversation to the significance of approaches that make it hard to test on people.

I would recommend this audiobook.

I altogether appreciated this book however much one can. The theme requests regard for the casualties that are addressed in this book.

Only the tip of the iceberg!

I would highly be recommended to listen this audiobook, everyone. This audiobook gave me a lot of information. This book is very elegantly composed and described comparably well.

Revulsions of why wars are the most exceedingly awful encounters throughout the entire existence of humankind - no restrictions, no responsibility, and no ethics for the individuals who perpetrate the most loathsome violations possible. I upheld this Audiobook and I was not capable need anything over to Audiobook at it again. Recommended..

A great informative audible for us!

Indeed, even I was upset by the total shortfall of sympathy for individual people and I have investigated the Nazi clinical analyses inside and out. As ghastly as those were, Unit 731 takes cruelty to another level. Also the concealment and dissents after the war. Very much done, particularly with the limited quantities of proof accessible. I energetically suggest this book.

A maker is just ready to be grateful when the writer can brighten an Audiobook very beautifully. Fascinating piece of failed to remember history. Every expression of the Audiobook dazzled me. This Audiobook contains a great deal of data that will really help you a ton .Highly suggested this Audiobook for everybody.

Those who cannot remember the past are condemned to repeat it. George Santayana. All walks of life can learn from the harsh lessons from this book.

Indeed, even I was upset by the total shortfall of sympathy for individual people and I have investigated the Nazi clinical analyses inside and out. As ghastly as those were, Unit 731 takes cruelty to another level. Also the concealment and dissents after the war. Very much done, particularly with the limited quantities of proof accessible. I energetically suggest this book.