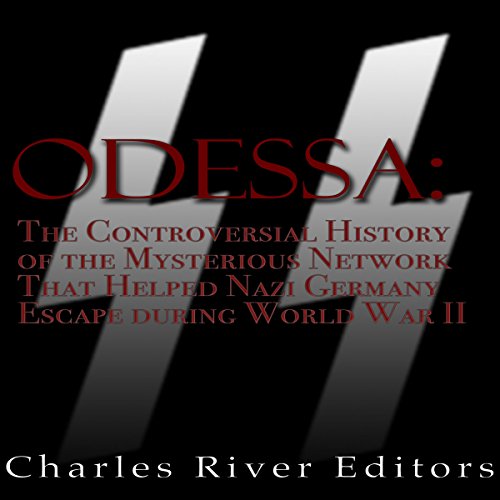 Cloak and dagger espionage, assassination, dangerous adventure, and strange deceptions such as the Operation Mincemeat plan wherein the corpse of a Welsh pauper fitted with a uniform and false papers deceived the Nazi hierarchy about the location of the Western Allies' first landing in Europe, all constitute as real a part of World War II's kaleidoscopically varied history as battles and clear-cut policies. With such a complex and dramatic struggle, human nature dictates a crop of conspiracy theories also arise.

The ODESSA, or Organisation der Ehemaligen SS-Angehörigen (Organization for Former SS Members), appears quite plausible compared to some World War II legends. Next to tales of Hitler attempting to draw power from the Spear of Longinus or the Holy Grail, or the Japanese burying gold in foreign countries which thousands of treasure seekers cannot locate in the years since, the idea of an organization enabling the escape of SS and other Nazis stands as modest and believable.

The escape of hundreds of Nazis to South America and the Middle East represents a factual matter of history, not legend. Some of the Nazi hierarchy's vilest members, such as Dr. Josef Mengele and the mass murderer Adolf Eichmann, slipped out of Europe and spent years or decades safe from retribution. There, some evidence strongly suggests, they worked to bring the overthrow of Western democracy, frequently with the wholehearted support of Islamic extremists and the aid of money in Swiss bank accounts.

Simon Wiesenthal, the famous Nazi hunter, asserted the ODESSA existed. Some historians propose that Wiesenthal may in fact be the original source positing the network's reality. The reality of the ODESSA, and its successor organizations such as Die Spinne (The Spider) remains a subject of historical debate and contention. Some notable and extremely qualified historians maintain firmly that the ODESSA represents a phantasm, while other authors speak just as confidently of its existence.

Regardless of whether the ODESSA existed in the formal sense Wiesenthal and the American CIA posited, an organized program of Nazi rescue certainly developed in the immediate postwar period. While the Catholic Church and even U.S. intelligence had some hand in enabling some escapes to Argentina, the preponderance of fleeing Nazis sought refuge in the Middle East. Using Italy or Franco's right-wing Spain as stopping off points, financed by two former Third Reich bankers, and masterminded by a man who likely qualified as Hitler's direct successor, the extremist Grand Mufti Haj Amin al-Husaini, the real ODESSA – whether an officially constructed organization or a simple shorthand for an informal but powerful network animated by a common purpose – represented a new alliance between the defeated Nazis and a number of Islamic extremist groups and governments.

Among Simon Wiesenthal's other insights, the tireless and perceptive Nazi hunter shared one with his friend and colleague Alan Levy: "Then we talked of 'leftist fascism' and how the Russians and their Stalinist puppets in Eastern Europe issued decrees with the same wording used by the Nazi occupiers. As Simon put it: 'The world is round. If you go right, right, right, you come out on the left.'" (Levy, 2002, 14). In other words, the real ODESSA transformed the Nazis from a primarily European racist phenomenon into a Middle Eastern and quasi-Islamic racist phenomenon. In the process, they came to view all European culture with the same lethal hostility as they held towards Jews, and they even contemplated assisting a Soviet conquest of Europe, proving Wiesenthal's axiom functionally true in more than one sense.

I guess I need to look a little closer at the descriptions. I didn't realize how short this one was. Good information though.