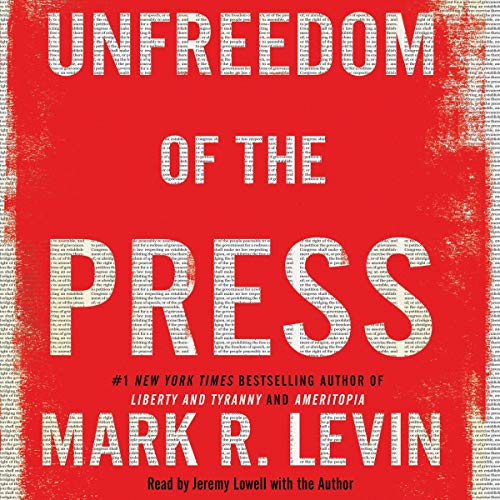 Unfreedom of the Press

Six-time New York Times best-selling author, FOX News star, and radio host Mark R. Levin “trounces the news media” (The Washington Times) in this timely and groundbreaking book demonstrating how the great tradition of American free press has degenerated into a standardless profession that has squandered the faith and trust of the public.

Unfreedom of the Press is not just another book about the press. In “Levin’s finest work” (Breitbart), he shows how those entrusted with news reporting today are destroying freedom of the press from within - not through actions of government officials, but with its own abandonment of reportorial integrity and objective journalism.

With the depth of historical background for which his books are renowned, Levin takes you on a journey through the early American patriot press, which proudly promoted the principles set forth in the Declaration of Independence and the Constitution. This is followed by the early decades of the Republic during which newspapers around the young country were open and transparent about their fierce allegiance to one political party or another.

It was only at the start of the Progressive Era and the 20th century that the supposed “objectivity of the press” first surfaced, leaving us where we are today: with a partisan party-press overwhelmingly aligned with a political ideology but hypocritically engaged in a massive untruth as to its real nature.

What listeners say about Unfreedom of the Press

Every Student Should HAVE TO READ THIS.

It's a shame when the media constantly operates a double standard, with the hope of constant liberal Amnesia being the norm for their audience, As pelosi said "most Americans are too stupid to remember the truth, they have to accept what we tell them," (march 2018 vox). Read this book, absorb the audiobook, and if you doubt, then do your own research and discover Mark Levin is giving the REAL TRUTH.

When Freedom of the Press Died.

The book historians will turn to when Obama is reviewed and the Trump presidency acknowledged.

Disclaimer: I can only take Mark Levin in small, measured doses, but I always walk away thinking about the topic. This book is excellent! This year I finished an old goal, read about Washington, Franklin and Jefferson. In reading Washington I realized I had to read Hamilton and eventually Adams. They all have one common theme, the press. It is about the use of the press, the value of the free press, and the importance of knowing what the bias (what side of an argument) the media falls in. From the first chapter, Levin lays out exactly his own bias, explains it, and walks the reader through a journey of self discovery. As a blogger with a total of maybe 10 readers outside my immediate family, I understand that by letting people know where my opinions come from, it allows them to make a wiser choice. In the book, the part that hit me right between the eyes, is the definition of a facts journalist versus an opinion journalist. A facts journalist worries about the who, what, where, when and how of the story being presented. The opinion journalist takes the those and attempts to explain the "why" of the story. In the current version of the press there are very few - if any - fact journalists. Most stories cover the who, what, where, when and how, only to support the why. Sadly, if you set out to support your answer to the "why" of a story, you collect and present only those facts that support your "why" theory and exclude those that counter your theory. Joel Barker's book "Paradigms: The Business of Discovering the Future" talks about the hidden filters in our minds, what are called paradigms. If you have a liberal paradigm, you won't realize how you subconsciously exclude things that are counter to your paradigm, and easily welcome data that supports it. This is truly a MUST READ book for anyone that enjoys thinking through current events and how the press reports them.

This nonfiction book certainly deals with the current status of the press but the greater value of UNFREEDOM OF THE PRESS is Levin's treatment of the history of the press in the US. I recommend this book to everyone without ragaurd to their politics. It's only 6.5 hours long but is still well worth a credit.

A fact based look at the Mass Media

Well researched material. An in depth look at the mass media. How the progressive left have taken over the mass media platforms and turned them into a propaganda machine for the democrat party. The book sheds light on the agenda of the progressives that have taken control of media. The self censorship, cancel culture and reporting of pseudo events. Their goal of destroying President Trump. The pushing of narratives that make Americans think we are a racist society that must be torn apart. My only criticism of the audiobook is Mark Levin should have narrated the whole book not just the introduction and epilogue.

I couldn't put it down!

Unfreedom of the Press is a great book that offers historical and relevant context to today's "top stories." Mark's hard research is clearly seen by the extensive bibliography (kindle), and the deep insight each source brings to the topic. Like NBC banning "climate change deniers" they and the rest of the liberal media have banned the objectivity and context the Citizen needs to be self-governing. This book is a must read for anyone wanting to know the rest of the story.

Thank you Mark Levin for caring enough about America to expertly bring this harrowing information to light. A must read and share book!

I loved how Mr. Levin taught us the past history of the press going back to before we became a country. Then ties all of the history to what's happening today in our so called press. I also find interesting that the press keeps going through the same cycle of one sided stories until the people put a stop to it. then the press goes back to balanced reporting, but slides back into the "group think".

A fun and easy read. Chapter 6, wow. Take time to actually review the footnotes and resources Levin provides for a much richer experience. If facts mean nothing to you then this book isn’t for you.

Thank you Sir. From a former Born & Raised Saul Alyinsky, Bill Ayers raised childhood w/ a radical Chicago mother; hating and marching against everything that was against Faith, Liberty and Americanism to well, Faith, Liberty and Americanism. Trump saved my Faith, My respect and love for America and its Constitution and our Bill of Rights and you, as with others, my Faith in God; all Americans and Hope has been restored.

This book could not be more timely or important.

After the collapse of the “Russian Collusion” narrative it is time for the American public to take a long, hard look at why the mainstream press got it so wrong and misled the country so badly. If the purpose of the constitutional Freedom of the Press clause is to truthfully inform the citizenry we are being badly served.

“We Are the Citizenry”

I’ve only just begun reading Levin’s latest masterpiece, Unfreedom of the Press, and I was captivated even from the epilogue! Mark Levin is a brilliant mastermind, an avid crusader for American patriotism, and a champion for truth, justice, and liberty. He truly is “The Great One”. In this book, he acknowledges “we are the citizenry” and we “must demand a media worthy of our republic”. Don’t wait for the media to tell you about this book (spoiler: they won’t). Get it now, and discover the alarming truth about our nation’s press: the so-called journalists, reporters, social media, and our legacy media outlets we’ve entrusted (or not) to give us the information we deserve. I hope to meet this great man some day!