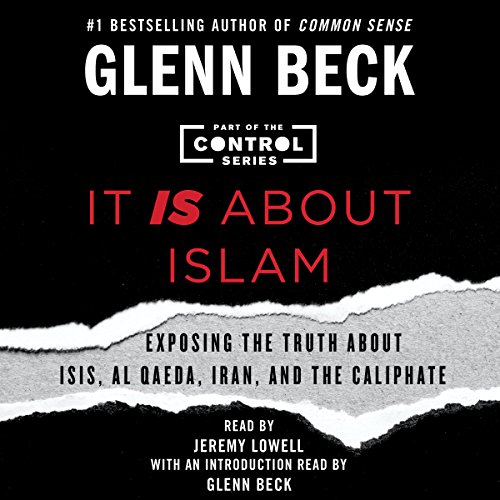 It IS About Islam

Number-one best-selling author and radio host Glenn Beck exposes the real truth behind the roots of Islamic extremism in Muslim teaching in this sharply insightful audiobook that debunks commonly held assumptions about Islam and the dream of a renewed caliphate.

From the barbarians of ISIS to the terror tactics of Al-Qaeda and its offshoots to the impending threat of a nuclear Iran, those motivated by extreme fundamentalist Islamic faith have the power to endanger and kill millions. The conflict with them will not end until we face the truth about those who find their inspiration and justification in the religion itself.

Drawing on quotes from the Koran and the hadith, as well as from leaders of ISIS, Al Qaeda, and the Muslim Brotherhood, Glenn Beck seeks to expose the true origins of Islamic extremism as well as the deadly theological motivations behind these agencies of destruction.

Using the same unique, no-holds-barred style from his best-selling books Control and Conform, Glenn Beck offers straight facts and history about the fundamental beliefs that inspire so many to kill.

What listeners say about It IS About Islam

Wake up, the west

Very informative. Extremely concerning and a wake up call to all of us that value our freedoms.

This was a disgusting read that is loosely based on small and sheltered views of certain extreme Shiite views. Beck makes little distinction in classifying all Muslims in this group. He lays out a fictional scenario where all the free world is forced to practice Sharia law. This is comparable to classifying all Christians as Illuminati that will undermine the freedom of the entire world. If you love propaganda news and blatant ill founded lies that justify extreme intolerance, this book is for you. If you have half a brain, pass. Of the hundreds of audible reads, I have in my library, this is an embarrassment and was a waste of time.

I always liked Glenn Beck but don't like the attempt to persuade the audience at how civility and peace are hypocritical to Islamic teachings. Simply packaging it up real nice and people who don't know any better gobble it up as if it's peer reviewed fact.

This was masterfully done, and well supported by incontrovertible facts. A must read for those who are interested in learning more about Islam.

listening to this book is like drinking from a fire hose. Lots of information it comes very fast so even though I got the audio book I just ordered the paper back so I can go back through and try to get more out of it.

Beck's obviously right wing but you should know that before listening. On the other hand, he makes great use of quoting texts and statements by prominent Muslims to make his points. If you can get past his right-leaning bent, you will be challenged by questions like "Is Islam compatible with the first amendment (or our constitution in total)?" Or, "How will such a divided religion such as Islam reconcile the claims and behaviors of the radicals with the more modern?"

The book leaves one wondering how Americans, Brits, French, etc will deal with the issues of free speech, shariah and terrorism.

All-in, a worthy listen for a calm and thinking person. Maybe not so much for radicals on either side.

Clear, concise, and a must read

Glenn Beck has been right on every prediction. He's been persecuted mercilessly by people of lesser intelligence and inability to think. Thank God Glenn has taken up the task to educate of the masses.

This book lays out what every American should know and understand about Islam and the Quran. It should be required reading for all of our high school students (along with "Common Sense").

I wasn't sure about Glenn Beck but I now understand why so many gave it 5 stars.

Every American who loves his country needs to read/hear this book.

Islamic jihad is very well presented, easy to understand and a real eye opener. Well written and well narrated. I will listen to THIS one a few more times to absorb the impact Islam will have on our country. We cannot ignore what Glenn Beck is saying. If we do, it is at our peril.

One of Beck's Most Important Works

In today's troubled and dangerous world, this is a book EVERY AMERICAN SHOULD READ. The historical aspect of Islam outlined very well in this book was both enlightening and disturbing. The book has solidified my conviction that Islam is more a Doctrine of World Domination rather than a "religion." Islamists remind me of a more sinister version of the movie, "Invasion of the Body Snatchers," about an alien force that wanted to "fundamentally change America..." Now, where have I heard that phrase before?!

Please read, for all of our sakes

A very humbling depiction of our current and future state. We are battling for the hearts and minds of men. Lets not hide.