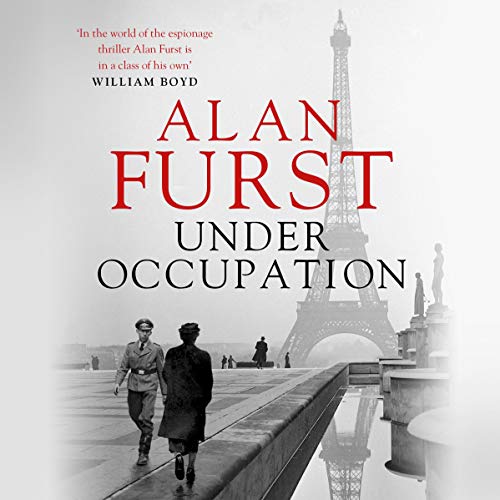 Under Occupation is based on a true story. After the German victory in 1939, thousands of Poles were sent to Germany as slave labourers.

From Germany, the Poles found ways to transmit intelligence back to the British in London. Under Occupation takes place in occupied Paris in 1942, with scenes in Germany and Romania. The hero of the book is Paul Ricard, a French writer of genre - spy and detective - novels.

Ricard begins to work as a spy against the Reich, especially in the area of German U-Boat construction at naval yards in both countries. There are very strong woman characters in the book: an émigré Polish girl who, with her boyfriend, is a bank robber, a Turkish woman who is a member of a family that has been in the contract espionage business since the renaissance, and others.

How the mighty have fallen

I was an avid fan of Alan Furst’s early books which brilliantly recreated wartime Europe. I remembered, too late as I had started listening to this, that I did not enjoy the last one and had vowed to buy no more. I struggled on, inspired mainly by the excellent narration and evocative descriptions. This is not a novel in the conventional sense; more a series of vignettes ,some of which have wildly implausible plot lines that at times make you feel the author must think you’re a fool. Characters enter and leave without explanation and all seem stereotypical and one dimensional. This is a very long way from Mr Fursts earlier work.

I’m a big fan of Alan Furst but I was disappointed with Under Occupation. The characters didn’t resonate, their actions were illogical and it all felt slow and tired. I won’t give up on him as his previous books were excellent.

The gritty streets of Paris reflect life under the Occupation and the struggles to survive.

A most enjoyable listen. It was very refreshing to listen to a story where ”our hero” isn’t the James Bond type of agent who can do everything,including killing a patrol of german soldiers with a revolver! I hard is an untrained resistance helper who is thrust into situations that he doesn’t know quite how to handle and is over his head sometimes. But a bit of instruction and or help from his handler and he delivers the necessary result. It almost reads like a diary, with some occurrences almost under written. This did not spoil the enjoyment however. Not a routine occupation novel, but still very enjoyable.

I’ve read most of. Alan Furstse books He is my favourite author. This is my first audio of his work and I was very disappointed by the dull narration. His Germans sounded more like young Danes and the females were all lacking in character.