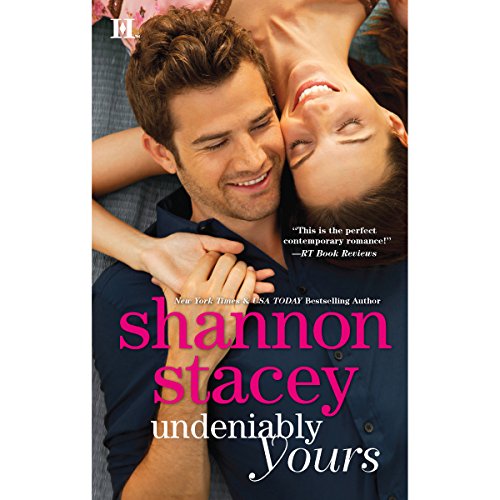 Bar owner Kevin Kowalski is used to women throwing their phone numbers at him, but lately he's more interested in finding a woman to settle down with. A woman like Beth Hansen. If only their first meeting hadn't gone so badly....

Beth's tending bar at a wedding when she comes face-to-face with a tuxedo-clad man she never thought she'd see again. She tries to keep her distance from Kevin but, by last call, she can't say no to his too-blue eyes or the invitation back to his room. Then she slips out before breakfast without leaving a note and, despite their precautions, pregnant.

Kevin quickly warms to the idea of being a dad and to seeing where things go with Beth. After all, he's not the player she thinks he is. But she's not ready for a relationship and, given his reputation, it's going to take a lot to convince her to go on a second date with the father of her child.

I really liked the other two books in this series, so I was really surprised by this book. The heroine of the story put me right off. Perhaps if her character was better explained or if she came across as anything but completely emotionally shallow the book would have been tolerable.

I like Shannon Stacey but this is really bad. Beth, the main character is so unlikeable (a real #itch) that you do not pull for her or them as a couple. After 20 chapters of her being "prickly" she realizes she is in love with Kevin tells him on a napkin and they get married - all this in the last 5 minutes of the audiobook. Beth pushes him (and everyone else) away for no explained reason, holds on to this for 98% of the book and then instantly (again for no explained reason) decides she loves him and wants to get married.

There was no character development to show how she changed and what made her break her though and open herself up to the relationship. The dialog between the brothers, sister and parents was ridiculous and the author should be embarrassed. I know if it were me I'd change my name so no one knew I wrote such a bad bunch of trash. The narrator was okay.

This book is incredibly shallow. We never learn anything about Beth, the main character, other than the fact that she avoids love and relationships. Her parents "smother" her with love so she leaves home to be on her own. She gets short term jobs and saves the money so she can leave town when people start caring about her. In the entire book she never does a single good thing for another person, never acts selflessly, never shows any character. On the other hand, Kevin is adorable. He steps up and does everything for Beth. In spite of Kevin's extreme niceness, awesome handsomeness, and too numerous to mention positive qualities, he falls for Beth because she is not interested in him and/or is having his baby. The entire book is filled with Kevin being nice and understanding and Beth being aloof and angry. About half way through the book, she stops thinking about pushing Kevin away because he is smothering her (like her parents did) and decides to push him away because his love is probably not real (which she should like because of her other love-phobia problems). For the remainder of the book she is cruel to Kevin because she's afraid he might not really love her. In the last 5 minutes of the book, after I spent the last many hours begging Kevin to leave the virago, she decides to love him, thus clearing the way for a happy ending. By the way, Beth never does anything to redeem her character other than change her mind about accepting what Kevin has been trying to give her thoughout the book. After the honeymoon she's sure to be harping on him again. Unbelievably shallow writing.

NOT a romance, hoping the dude would dump her!

I was stuck driving across country listening to this. The lead female character was so incredibly ungrateful and B-it-Ch-Y the entire time, up until the last 10 minutes of audio. THE WHOLE time she just complained about everyone being nice to her, she gets knocked up by a guy she doesn't even know and he gives her an apartment, job, and $ and she just pushes him away. He's such a nice guy that by the end you can't WAIT for him to give her the boot. Now that is NOT romance. horrible, that and the author must have an obsession wtih fatty food. Every chapter and one of the characters is eating something digusting.

Not the best of the series, but good!

Would definitely recommend this book as a fun read (or in this case listen)! Characters are easy to fall in love with! Best narrator! No crazy sex scenes and the heroins doubts get tiring but good book regardless! Love this book family! :)

The protagonist had the same doubts for the whole book and it made it a bit too long.

Another fun, sweet, romantic, sexy story by Shannon Stacey. The Kowalskis are such a wonderful family and I hope that the author continues the series beyond three books. This is Kevin and Beth's story who, after a one-night-stand, end up pregnant.

I recommend this book, and the entire Kowalski series, to everyone who enjoys Susan Mallery and Robyn Carr books. Read the series in order: Exclusively Yours, Undeniably Yours and then Yours to Keep.

Narration: I've listened to three books by Lauren Fortgang and she has been consistently good. She has distinct voices for each character and adds emotion to the story. I will definitely look more books narrated by her. Very enjoyable experience.

Beth’s unreasonable pushing of Kevin went from
endearing to barely tolerable. It was unnecessarily dragged out and she was too icy. BUT their story was far more appealing than Kari and Jo in book one.

I am really not a big fan of the narration on this series. I have a family just like this one, everything we do is together but Kevin's voice is a little childish sounding for my liking. I am not one to give up a story line for a review, but Beth in this book was VERY annoying at the end. I think if I was the guy I would have walked away. The book isn't horrible, so I rated as OK.

I loved the story line. However I felt the narrator made the men in the story sound like little boys.