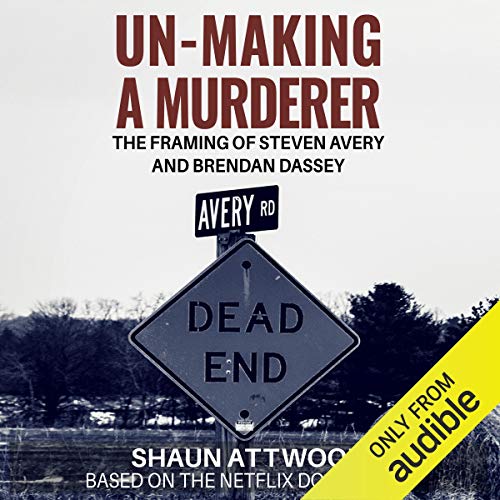 By: Shaun Attwood
Narrated by: AmadeuS
Try for £0.00

Innocent people do go to jail. Sometimes mistakes are made. But even more terrifying is when the authorities conspire to frame them. That's what happened to Steven Avery and Brendan Dassey, who were convicted of murder and are serving life sentences.

Un-Making a Murderer is an explosive book which uncovers the illegal, devious, and covert tactics used by Wisconsin officials, including:

The art of framing innocent people has been in practice for centuries and will continue until the perpetrators are held accountable. Turning conventional assumptions and beliefs in the justice system upside down, Un-Making a Murderer takes you on that journey.

The profits from this book are going to Steven and Brendan and to donate free books to schools and prisons. In the last two years, Shaun Attwood has donated 15,000 books.

What listeners say about Un-Making a Murderer

Not the book that this case deserves

I purchased this book after watching the 2 seasons of the Netflix documentary "Making A Murderer".

Like most people that have seen it I was intrigued by the murder case of Teresa Halbach and the subsequent trials and appeals of those found guilty. But I was curious about the facts of the case beyond those that were presented in the programme. Mostly because while I was watching it I was aware of how biased it was towards those two defendants. After all, they had been found guilty and from the way the programme was presented you would believe that nobody in the world, other than the investigating police force, agreed with that verdict.

A quick look around the internet (Google/Reddit) tells you that there are plenty of people who do not accept the programme's interpretation of the evidence and make good points about the supposed guilt or innocence. This audiobook had good reviews, so I was hoping that it would present things that I had not heard, or at least provide a fresh questioning voice to give a counterpoint to the TV programme.

Sadly, it is even more biased.Also, if you have not watched the show it would be absolutely incoherent. There are some things raised that I had not heard but there is very little detailed analysis and a lot of questionable assertions. The content is also very poor. Large parts of it are just verbatim narrations of the Brendon Dassey confession. It begins with a dictated letter from the author to one of the prosecution lawyers where he suggests that he hopes the lawyer ends up in prison and has a mishap in the showers. Very odd.

On the plus side the narrator does do a good job at distinguishing character voices.

So if you want a book that provides a more balanced look at the case look elsewhere. I am not sure there is one yet, but Reddit is a good place to start. I remain unconvinced either way. I hope that some more of the truth comes out, the victims family deserves it.

Great book giving even more detail than MaM. How is it that it is clear to everyone, except the US justice system, that Steven was framed!

Showsthe shocking case for what it really is

Brilliant book I have followed so much about this case but this was by far the clearest to show the shocking truth of this set up. I hope one day they find out what truly happened to this poor woman.

Very well written. Highlights the inadequacies in the case of Steven Avery and Brendan Dassey. It's shocking how someone can be wrongly convicted once, let alone twice. The justice system in the USA has a lot to answer for

This book was honestly quite weak, a large chunk of the book is just a re-reading of the interogation of Brandon and is all done in their voices. was expecting better from the book and quit at 6 hours.

Disappointed with this book

I brought this book, in hopes of finding out more stuff about this case. I haven’t been able to finish though as the silly voices in my opinion bring a attempted comic vibe to a serious matter. I’m the first to say I dislike KK but the childish voices are unnecessarily and ruin the listen.

A must for MAM followers.

Answers a lot of questions in detail. Brilliantly written with very clear narration. Thank you for spreading the word on SA & BD's injustice.

Biased? Yes it is...and so it should be!

It's very interesting how life sometimes works, lady luck has downright up'd and left Steve Avery.
Karma needs to take a long hard look at itself, it's insane that a guy should spend a good portion of his life in prison as a result of a wrongful conviction, but to do it twice!

The author's summing up of what might well of happened to Teresa and how certain people covered their own backs with Avery & Dassey is very thought provoking.

I have a feeling the truth will never come out, this tends to happen when good people simply stop being good.

Insightful look at Making a Murderer

The author does an amazing job of exposing the tactics used by prosecutors and detectives to frame innocent people.

Attwood pulls no punches about government officials, and perhaps can get away with stating things that lawyers and journalists who have written other books about making a murderer cannot. Can’t believe these guys are still in prison. They are so obviously innocent. I’m looking forward to season two.

This is a great book for anyone that is interested in the Steven Avery and Brendan Dassey case. The narrators impressions were both surprising and awesome. Borders on humor with his bang on impression of the slimy Kratz 😁

Would you listen to Un-Making a Murderer again? Why?

If you believe Steven Avery’s guilty after reading this book, then you truly are a diehard believer in a justice system that produced the likes of Ken Kratz. If you read Griesbach’s MAM books or Kratz they present the information in such a distorted way that you may have doubted Avery’s innocence. Attwood’s book puts to rest the myths perpetrated by these misleading authors and reveals the exact ten strategies the state of Wisconsin used to framed two innocent man.

I thought I had the speed doubled but I did not, he just speaks way too fast and attempts to imitate Kratz and it’s awful! I made it 5 minutes into the book before requesting a refund, I gave the story a high rating because well it’s what the story is, but absolutely cannot listen to it!

The pivotal story in American justice

Manitowoc County Sheriffs Department coerce a confession from a 16 year old mentally slow teenager at his school, without the presence of a lawyer.
in order to convict his Uncle in a crime that will save the county from the 36 million dollar lawsuit they owe him.
Shaun exposes the motive and tactics of the county from the lowest deputy to the DOJ Attorney General who's lack of ethics in the justice department destroy the lives of two men, while the killer goes free.
Steven Avery was framed for rape in a case that was later dismissed when the real killer was found and charged, because of a previous case of self interest involving the Manitowoc County Sheriffs Dept. This was the perfect opportunity for them to escape accountability,
and to frame him a second time.

While all of the books that review the case of Steven Avery and Brendon Dassey are most interesting, the man who "read" this book for us was the absolute worst reader I've ever heard. I could not finish the book, despite the material presented. This man should never again be allowed to read for Audible.

The guy talks too fast and tries to impersonate ken kratz. It’s annoying to listen to and the story just repeats what MAM docu is. If you’ve that, no sense listening to this weirdo.

Averys set up, for sure!

Extremely informative. Loved it
Brandon should be set free and Steven should get a new FAIR trial.

If watching "Making a Murderer" has left you with any doubt as to the guilt or innocence of Steven Avery or Brendan Dassey, this book will provide the necessary information to eliminate doubt, and show innocence. While this book does contain some speculation and opinions (as every writer no doubt has), the majority of the topics brought to light are based on 100% fact. Meanwhile, the books written by opposing parties contain only the information they consider factual, which as the insurmountable evidence in this case shows, consists primarily of compromised "evidence" exhibits. It is astonishing that this information is available to anyone willing to look past their pre-determined bias, and so few (if any) have exercised that ability. Overall, truly shows the magnitude of effectiveness of the state justice system's unethical tactics can be when applied to the public, and a jury of our peers. This blind justice has prevented a real killer from being identified and captured, and took 2 more lives unnecessarily. This book covers all of that, and more. Phenomenal!

I read reviews and almost returned this book within minutes of starting it. Yes, it's true that the narrator reads very fast. I usually have my speed set at 1:20 and I had to back him down to .95. It's also true that he uses some crazy impressions, some are poking fun, but most of them are pretty darn accurate, even if a characture of reality. They are certainly well researched. As for the writing, there are several times where the author uses long transcripts of events in telling this story. Surprisingly, with all I've read and researched, there were a lot of chunks of testimony that I've never heard. I don't agree with his end theory about meth users, but I think even as he says this, he still captures the essence of my number one suspect. I will admit that there is some antagonistic writing and it's will be off-putting to a guilter, but this information deserves a second look by the courts. I know, Zellner is trying.... Beyond a shadow of a doubt, there is so much room for doubt.

The narration is too fast and the different voices used for quotes is annoying. I couldn't take it and after just the first chapter I requested a refund of my credit.

This being the 3rd book I have listened to regarding the Avery case, there is NO doubt in my mind that he was framed. I realize it takes a small army for this to happen with all the evidence, etc, but with the history of this law enforcement in this county that is a reality! This man was framed and his nephew had NO part of it. His story changed 3,4,5 times based on the questions and what they WANTED him to say. He had absolutely nothing to do with any of it. I'm not a fan of Wisconsin anyway, but at least I know what county to steer away from!!!