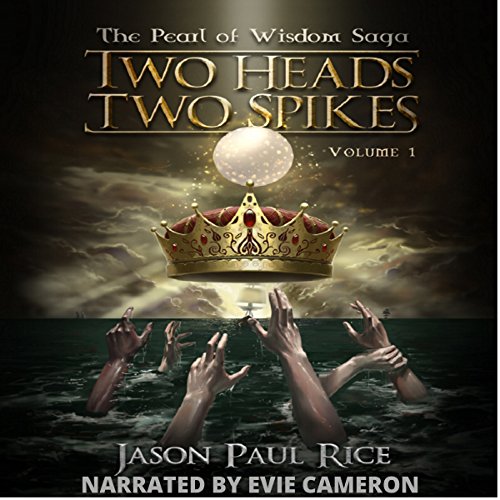 Could you defy a king's command to protect your only daughter?

With intense hatred brewing among the ruling families, Duke Jon Colbert has a choice to make. Will the indomitable duke bend a stiff knee and obey the king or risk treason to be the first man in many years to defy his king openly?

In a land where the lines between good and evil can be both clear and blurred, motives for revenge become entangled in a world of intrigue, deception, and drama. Separate storylines converge to weave a vivid literary tapestry of interesting characters with questionable intentions.

Two Heads, Two Spikes is the first volume in Jason Paul Rice's Pearl of Wisdom Saga. If you love George RR Martin, Joe Abercrombie, and Robin Hobb, you'll enjoy a series that combines their tradition with a multiple point of view epic fantasy set in the medieval period.

.A labyrinth of a tale.

What made the experience of listening to Two Heads, Two Spikes the most enjoyable?

A labyrinthine story that was full of collusion, manipulation,espionage death,life and a hunger for power,love,command and everything in between.As other reviewers have said fans of Game of thrones will like this!I admit I had to listen to some parts a few times to grasp the plot as there were so many story lines intermingling but that just shows how good this book really is.There are so so many moving parts its moves and counter moves and apparent coincidence .It all meshes together and we are left with a tale that will astonish you as it unravels and displays some of its secrets ,but many cards are held close to the heart and it leaves the reader hungry for the knowledge of what comes next .It is superbly written ,as a reader I could just about follow all the moving parts but as a writer...great skill is required to create something as unique and spectacular as this.The book in its entirety was astounding by starting out surprisingly and unfolding in an incredible way that only increased my adoration for it. Evie Cameron was a siren singing this story,I could not turn away,amazing i can not wait for more from Jason Rice.

I provided this review in exchange for a complimentary copy of this audiobook from the narrator, author, or publisher.This as always is my honest opinion.I would give the book and narrator a 4.5 but as I cant I have tried to balance that out with the star ratings for "story" and "overall".

I received this book through Audio Book Boom in exchange for an honest review. The need to write a review was the only reason I finished this book. There is nothing terribly wrong about this book to make me hate it. There just wasn’t anything compelling about it either. The beginning for me was the worst. I do concede that it gets better, but never enough so that I actually wanted to continue reading it. I like epic sized books set in a medieval type of time period with sword, sorcery and palace intrigue a la “Game of Thrones” and “Codex Alera” or any number of others. Although “Game of Thrones,” and “Codex Alera” are from two big name authors, I don’t actually require that my epic fantasy comes from a big name author. If it’s good, it’s good. This book just wasn't that good.

As far as I'm concerned, “Two Heads, Two Spikes” had too many unnecessary and uninteresting story threads that the book could have done without. I guarantee if they were removed, not only would they not have been missed by anyone, but the story that remained would have become much more compelling and focused.

“Two Heads, Two Spikes: The Pearl Of Wisdom Saga, Book 1,” just didn’t do it for me. It was a struggle to get through and I don’t have any intention of reading book two. I know I’m in the minority on this one compared to the reviews on Amazon, but, for what it’s worth, I stand by my opinion.

I thought the story was a little hard to follow in the beginning, if you're not paying full attention you may get lost as I did. Once I figured out what the writer was doing it became much more interesting.
There are a lot of characters and a few with similar names so be careful not to mix them up. As far as name go, I thought the really bad guy names(I'd say it but I don't want to give anything away) was lacking in creativity as well as the name of their island. It rather reminded me of a Saturday morning cartoon character. Overall it was a very interesting book, with lots of twists and turns and a very high cliff to hang from at the end.
The narrator was excellent, very well spoken and clearly understood. At times it may have been hard to distinguish which character was speaking, but again you have to pay full attention so this was likely my fault not hers.
I would recommend this book, but if you're offended by graphic violence, cursing, or sex then this would not be for you.

Confusing start but still worth listening too.

It took me quite a while to get into this, but I kept coming back to it because this audio book was given to me for free at my request from the publisher or author or narrator and I provided this unbiased voluntary review.
I almost quite many times it wasn't until the 40% mark that I started to enjoy it. The first 40% had me confused about who was doing what and what was going on. It was all over the place being told by several points of view. That could have been a lot clearer, saying so in so's pov.
The narrator was great but unfortunately it didn't help keep me more interested until about the 35% mark.
Reasons I enjoyed this book:
Action-packed, Entertaining, Great world building, Original, Page-turner, Twisted, Wonderful characters.
Oops I forgot to mention that I'm looking forward to the next part.

A good choice for Game of Thrones fans

Two Heads, Two Spikes is a terrific choice for Game of Thrones fans. The ultra violent and cruel book has a large cast of mostly unsavory characters who vie for power in a fantastical world. I got a bit lost at times trying to keep track of who was who. The narrator does a nice job.

I won a copy of this audio book. This is my honest and voluntary review.

I liked a lot the narrator for this one, ot was pretty cool.

the plot was dense and if you didnt put attention to the details you could get lost pretty quickly.

what i really liked of this book was that the twists were so interesting and all the politicals affairs and such and the betrayals were pretty fun and edgy.

its a little crude with some things, however if you really like political views in books you will enjoy this one.

This story has all of the excitement, blood, love, death and deceit. It has many story lines that were in the beginning hard to follow. The more I listened the more I understood.

This audio book was provided by the author, narrator, or publisher at no cost in exchange for an unbiased review.

I found this story to be complex, intriguing, and interesting. There is plenty of action from the get-go, some of it violent. There are political machinations, backstabbing, and betrayals. The cast of characters is numerous, and trying to keep them all straight made it hard to listen to this book casually. You really need to pay atteniion to keep up with everyone and what is going on. Be forewarned, this is book 1 in a series, so you'll need to buy the succeeding books or audiobooks if you want to know how it ends.

The narration was good, and the delivery was even and well-paced,

Fans of GoT will enjoy

I really enjoyed the first volume of this saga and would recommend it to readers who like the Game of Thrones series.

I suspect that some folks wouldn't find this book satisfying, because of the POV-switching (point of view) and because there are so many characters and plot lines. I suppose that's understandable, but I think that it's important to acknowledge what these types of books are all about. These aren't easy or quick reads. The cover of the book says that it's Volume 1 of a saga, so we know that plot arcs will continue in the next books. And, because the book is about political intrigues, we know that characters will be complex and there will be plot devices such as betrayals and secrecy. So, starting the book with the right mindset is important and one could argue that it's unfair to give this book low ratings because of this. it's like giving a comic book a low rating because it has too many pictures and not enough words.

The narration was effective, which is good (I often get grumpy when listening to an enjoyable story with mediocre narration).

The reason why I didn't give this book a full five stars is because audiobook listeners don't have the benefit of maps and family tree diagrams that are typically found at the front of print books. It makes an already complex book even more challenging, so there were a few times when I forgot who was who. I think that's normal for a book like this, but it seemed to be a bit more frustrating because of the audio format. I think this is something that authors/publishers should improve; I don't think it would be too difficult to scan diagrams into pdf format and make them available in the Audible library or on the author's website, and it would add customer value significantly for readers such as myself!

I provided this review in exchange for a complimentary copy of this audiobook from the narrator, author, or publisher.

If you enjoy the Game of Thrones

I was gifted this audio ARC from the author/ Narrator for a honest and unbiased review.
Jason Paul Rice must of been writing this book for a long time. The amount of characters and locations in this book is outstanding.
Once again Evie Cameron did an outstanding job with all the different voices.
If you enjoy the Game of Thrones you will love this audiobook

Lots of displays of variance and courageous acts in this story. I believe it would have been a better read than a listen. It was hard keeping track of who was who since their names were all similar. Maybe in print it would have been easier. But all in all a good story.