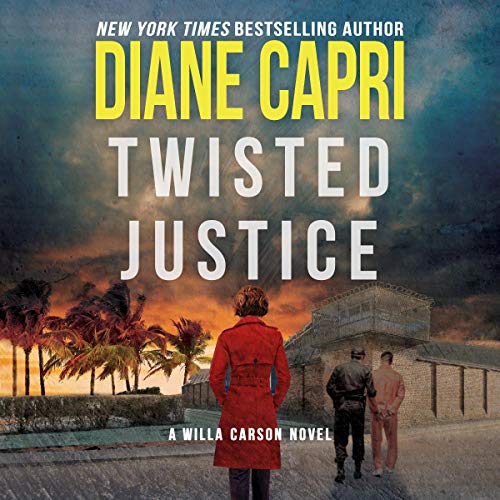 By: Diane Capri
Narrated by: Jodie Bentley
Try for £0.00

War hero General Randall Andrews has been nominated to the U.S. Supreme Court and George Carson leads the fight to defeat him. Before the final Senate vote on his nomination, Andrews is found shot to death in his Tampa home and George is arrested for murder. Judge Willa Carson believes with all her heart that her husband is the victim of twisted justice, but why won't he defend himself? George Carson could kill a man. But he didn't kill Andrews. Or did he?*

Realistic twists and turns keep readers engaged and guessing until the finale of this tense political thriller!

"Full of thrills and tension - but smart and human too." (Lee Child, number-one New York Times best-selling author of Jack Reacher Thrillers)
"In a time when our own justice system often blurs the lines between right and wrong, Judge Willa Carson is a heroine we can all salute. [Twisted Justice] is a taut and thought-provoking mystery that leaves readers both satisfied and looking forward to the next Willa Carson adventure." (P. J. Nunn, The Charlotte Austin Review)

What listeners say about Twisted Justice

I had high hopes for this novel, having read Diane Capri's take on the season for Lee Child's character, Jack Reacher. However, I was disappointed to find that, in this instance, she can't really tell a tale.

The main character is a judge, a former lawyer, who takes on an independent, private investigation to clear her husbands' name of a crime that she's convinced he didn't commit. Given that her professional aptitude should enable her to ask searching, pressing and probing questions, she does a really poor job of it. She makes silly mistakes and shows poor judgment. Not at all worthy of the character of a judge or a lawyer.

If this had been a physical book, I feel sure that I would have skipped past a few pages, to get back into the meat of the story, because several parts of the tale just seemed incredulous or unnecessary! In this day & age of mobile technology (2000), why carry around a portable recorder if you do not prepare yourself to use it to confirm your discoveries?

Finally, the whole tale is resolved, unsatisfactorily, in the epilogue. Nothing conclusive is gained and, I find it doubtful that, that lack of credibility would have been acceptable in a real world scenario! But, what do I know?

In the end, the concept of the story was a good one, I just feel that it could have been told in a more engaging, enjoyable, plausible way.

I am not tempted to read anymore of Ms Capri's own work.

very slow to get started

Very slow to get started. Repeated text from the previous book verbatim on multiple places. though I like her hunt for reacher series, but will not be purchasing any more of this series.

I hope lawyers and judges are not this stupid!

horrible. the main character is a judge and a lawyer but is portrayed as a complete idiot with no common sense. sad for females everywhere

And gets really tiresome at points. Would be a lot better if it was 30 to 40% shorter

Loved it, secrets and motives are deadly combination. Keeps you guessing until the end.