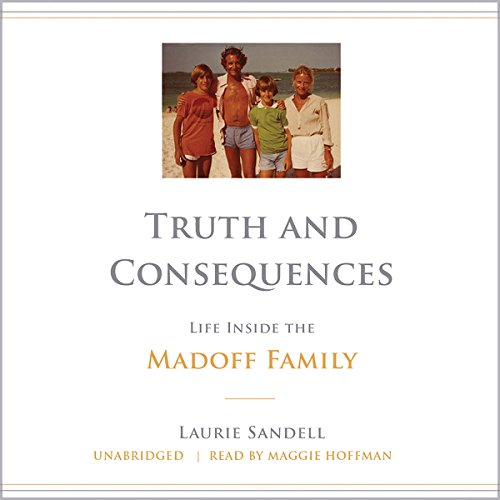 In December 2008, the world watched as master financier Bernard L. Madoff was taken away from his posh Manhattan apartment in handcuffs, accused of swindling thousands of innocent victims - including friends and family - out of billions of dollars in the world's largest Ponzi scheme.

Madoff went to jail; he will spend the rest of his life there. But what happened to his devoted wife and sons? The people closest to him, the public reasoned, must have known the truth behind his astounding success. Had they been tricked, too?

With unprecedented access to the surviving family members - wife Ruth, son Andrew, and his fiancée Catherine Hooper - journalist Laurie Sandell reveals the personal details behind the headlines. How did Andrew and Mark, the sons who'd spent their lives believing in and building their own families around their father's business, first learn of the massive deception? How does a wife, who had adored her husband since they were teenagers, begin to understand the ramifications of his actions?

The Madoffs were a tight-knit - even claustrophobic - clan, sticking together through marriages, divorces, and illnesses. But the pressures of enduring the massive scandal pushed them to their breaking points, most of all son Mark, whose suicide is one of the many tragedies in the wake of the scandal.

Muzzled by lawyers, vilified by the media, and roundly condemned by the public, the Madoffs have chosen to keep their silence - until now. Ultimately, theirs is one of the most riveting stories of our time: a modern-day Greek tragedy about money, power, lies, family, truth and consequences.

What listeners say about Truth and Consequences

Good book, Good story wether you believe the Madoffs knew nothing about this ponzi scheme is a little hard to believe, but that's up to the individual listener to decide for themselves. The only downside to this audio book is having to listen to the author and narrator impersonating Ruth Madoffs queens accent it was so annoying I got to the point where I nearly stopped listening to it (but maybe that's my problem).

No winner in the Madoff Story

This book was really interesting, to experience the Madoff disaster from inside the Madoff family.
As compelling as their story is you still feel more sympathy for the victims of this horrendous fraud.

This is a book about Catherine Hooper (the girlfriend of Bernard Madoff's son Andrew), her incredible brilliance, resourcefulness, and all around "fabulousness". The narrator reads the story with the breathiness appropriate for a romance novel when talking anything Catherine. Her tone changes to one of utter disgust whenever discussing Mark (Bernard Madoff's other son who committed suicide) or Mark's widow Stephanie. I guess the narrator was directed to do so because Catherine's doesn't like them (?) but it is very disconcerting. Do not buy this book if you are looking for insight into the Madoff scandal or the Madoff family (as I was). I stuck with the book to the end hoping to find a bit, but it provides none whatsoever. On the other hand if you are interested in learning about how wonderful Catherine Hooper is, this is the book for you.

Not about Madoff About His Family

Truth and Consequences: Life Inside the Madoff Family doesn’t deal with Bernard L. Madoff. Rather, Laurie Sandell relates the story of how Madoff’s family came to know about his fraud, how they dealt with it, and the fallout for all of them. If you are looking for insight into Madoff you will be disappointed. If you are interested in how the family endured this trauma, you will find this book more valuable. This is not a happy story. This is not an uplifting story. Readers will not be inspired. No one lived happily ever after. This is the gut wrenching story of a dysfunctional family caught up in a mind bending circumstance and dealing with it. The reading of Maggie Hoffman is well done,.

the most interesting Madoff book

this book clearly deals with the more personal side of the Madoff Scandal. The author was able to interview family members and had access that other authors did not. That makes it very interesting. But the author does not make it gossipy or scandalous. She's just telling a story about real people and what they went through and it's a very interesting story. Definitely makes you feel compassion for the Madoff family and I hope that the surviving family members are doing well. still lacking the insight into Bernie's character that would be the final touch. I've read about five books on the Madoff Scandal and none of them really crack that code. I guess he's a bit of a mystery.

This is a must read for any financially interested

Where does Truth and Consequences rank among all the audiobooks you’ve listened to so far?

Top of the list. I love audiobooks. But this was a unputdownable book.
The fact that this is the only publication that interviewer that spoke to Madoffs wife and his son.

What other book might you compare Truth and Consequences to and why?

Any of Madoffs books

Twenty years of research never told before. Painful lessons for so many because of one man's greed and keeping all of his corruption from his family. You may know the "money stories". This shares the tragedy of the unexpected collateral destruction.