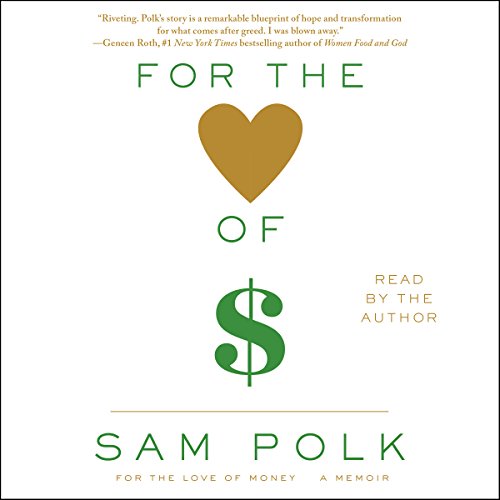 For the Love of Money

For the Love of Money

In 2014 a former hedge fund trader's New York Times Sunday Review front-page article about wealth addiction instantly went viral. This is his unflinching memoir about coming of age on Wall Street, fighting to overcome the ghosts of his past - and the radical new way he now defines success.

At just 30 years old, Sam Polk was a senior trader for one of the biggest hedge funds on Wall Street, on the verge of making it to the very top. When he was offered an annual bonus of $3.75 million, he grew angry because it was not enough. In that moment he knew he had lost himself in his obsessive pursuit of money. And he had come to loathe the culture - the shallowness, the sexism, the crude machismo - and Wall Street's use of wealth as the sole measure of a person's worth. He decided to walk away from it all.

For Polk, becoming a Wall Street trader had been the fulfillment of his dreams. But in reality it was just the culmination of a life of addictive and self-destructive behaviors, from overeating to bulimia to alcohol and drug abuse. His obsessive pursuit of money papered over years of insecurity and emotional abuse. Making money was just the latest attempt to fill the void left by his narcissistic and emotionally unavailable father.

As Michael Lewis did in Liar's Poker, Polk brings listeners into the rarefied world of Wall Street trading floors, capturing the modern frustrations of young graduates drawn to Wall Street. Raw, vivid, and immensely listenable, For the Love of Money explores the birth of a young hedge fund trader, his disillusionment, and the radical new way he has come to define success.

This is a very honest engaging and frank account of the journey of Sam Polk. What shaped him, the decisions he made and why he left behind a successful and financially rewarding career in finance for a more fulfilling life. Def worth a read!

Not many teachable lessons to walk away with such as a how to, but an enjoyable and thoughtful story if you are chasing money for happiness.

The author takes you on a journey through the high stakes world of Wall St. But what becomes apparent as the story evolves is that waging any amount of money against ones happiness will be fruitless. Happiness and love rule all, and Polk delivers this truth with an intensely entertaining read.

Mostly about relationships and family

If you are looking for story about Wall Street or finance in general then choose again. This book is personal memoir about friends, family and relationships and only has few chapters about the title.

A great story that will force you to examine your relationship with the almighty dollar.

one of the better stories that I've heard from someone who isn't a celebrity. For the love of money brings you into the world of wallstreet and what it takes to make it in that life. From his childhood troubles to his adulthood the stories were entertaining. If your looking for a story about how to overcome addiction and see how one person found his way to a more meaningful life then I highly recommend this book and maybe listening to it at 2x speed.

One of My Favorite Books Ever

I don't know what I expected to get out of this book.. but, holy cow! It was addicting! I finished it by the morning of my third day after starting it. Incredible. Addicting. Powerful.

Everyone stuck in the pursuit of money should read

This book does a phenomenal job of outlining the pitfalls of our culture as a consumerist society that fails to address the inherent needs of our people: love. Problems that are exasperated by childhood deficiencies morph into our adult lives and take on certain characteristics. Thank you for your honesty, courage, and wisdom Sam - you truly have inspired me today.

The book could've been way better if you didn't used so much vulgar words. J

Very Well written and read by the author and subject. What a journey he has had. I enjoyed the entire story and the numerous underlying messages and life lessons Sam builds on. The book had me reflecting on my own life and examining my past and future accomplishments. This kind of self reflection and association is a rare find in a book and that made it one of the best books I have read in some time. Two thumbs up Sam Polk. What's next?

I feel like so many of us feel like this in the endless chase and masking our fears / former wounds with endless goals which are empty.

I loved this book and look forward to the follow on when I hear more about his time in the non profit and being the man he transitioned into over the last few years.

This would also make a great movie btw!!!