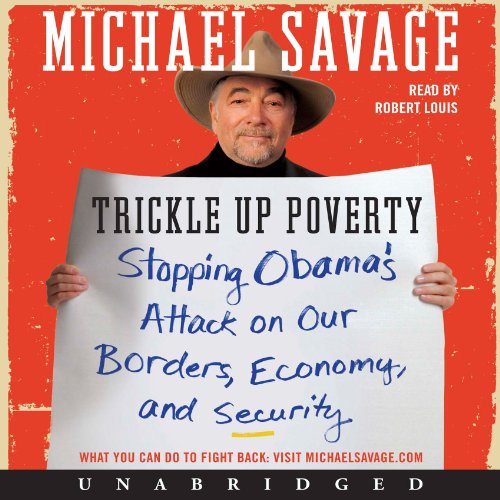 By: Michael Savage
Narrated by: Robert Louis
Try for £0.00

No longer can we be Barack Obama's sheeple and let the American Dream be trampled, beaten, and burned to the ground.

Trickle Up Poverty, by best-selling author and revered radio host Dr. Michael Savage, is your best defense against the Obamanomics that are dragging the middle class, and everyone else, into a Marxist-Socialist death spiral. The Savage manifesto you hold in your hands shows how Obama is circumventing the Constitution to push through his radical agenda - and, most important, how we can restore our country to the power and prestige that Barack Obama and his corrupt and degenerate "czars" are trying to destroy.

The Naked Marxist can and must be stopped. Obama's trickle up poverty is infecting all that we hold to be true and self-evident. Here's how:

We are dangerously close to losing the nation we love, but it's not too late. If you buy only one book to learn and react to what Obama the Destroyer has done and plans on doing to America, this is it!

What listeners say about Trickle Up Poverty

The book is much better than the radio show

I gave up listening to Savage and Hannity on the radio years ago because of the caustic and disrespectful way they treat their call-in listeners who dare to have an alternative point of view. I myself am very conservative and have given up on the Republican Party also. The Republicans are so close to the Democrats in philosophy and actions that there is realistically no major political options for the average American. I believe Ron Paul is the only current politician who offers any viable political alternatives to our current economic and political mess. I also believe Ron Paul is unelectable and is just a voice in the wilderness. The American politicians from both parties are taking a course of action that will sooner or later lead us to an economic crisis that will lead America into chaos. Just how soon is the real issue.

This is a great book, very well written with excellent examples and insight; however, it is much too verbose. It could have been half the length and would have been far more entertaining.

WOW WHAT AN EYE OPENER

Very informative. Edge of your seat listening. Trickle Up Poverty is on the Best sellers list and now I know why.

Savage squeezes the hard facts of a demised administration(s) with We The People... just get the drip of water torture on our foreheads.
Each chapter is a hike up out of the Valley FOG to a mountain top view of the truth.
Ending with a breath of fresh air compiling fresh ideas we all can ONLY DREAM about coming true.