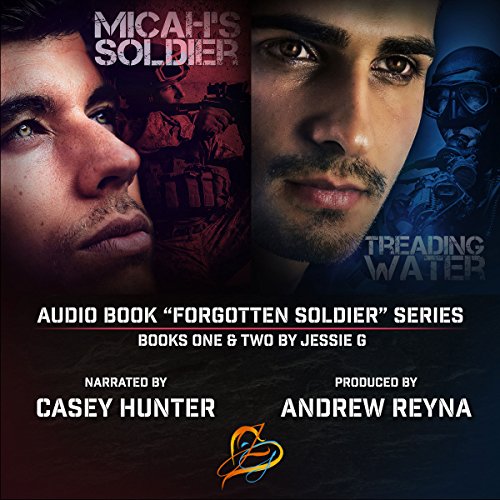 After devoting 18 years of his life to the US Navy, Petty Officer First Class Shane Parker is struggling with the very real possibility of becoming unnecessary. If he doesn't make chief petty officer before he's 20 - and it doesn't seem likely that he will - he'll be retired from active service and placed on the Fleet Reserve list until his mooring lines are officially cut forever. While it would all be very honorable and ceremonial, he simply wasn't civilian material.

Before even swearing-in, Julian Brand knew he wasn't cut out to be a soldier, but refusing wasn't an option. Generations of Brand man made careers in the military and the expectation of every Brand son was to follow in those prestigious footsteps. Though the prospect of being rolled back hindered his every step, he survived Battle Stations and did his time. Six years out of uniform and Julian still struggles to find familial acceptance as he fights to live life on his terms.

On the surface, they couldn't be more different, but when Jared Ramos calls, neither are capable of refusing. If they can find a way to work together, they might be able to save a friend and each other in the process.

Wow, I loved this story and will be reading/listening to more of JessieG.

The story flowed quite nicely and you got a feel for all the characters and what struggles they go through.
I am looking forward to more in this series..

The only real gripe I had with this audio is that there was no pause between the end of the chapter before the announcement of the next chapter but this does not stop you from enjoying.

Beautiful story though struggled with narration

What wonderful stories. Having read Micah's Soldier I was really looking forward to listening to that and Treading Water.
Jessie brings her characters to life with their thoughts, emotions and interactions with each other. The world created in these stories is an extension of her Sizzling Miami series. Jared covers Miami and Forgotten Soldier as well as quick appearances from Bull, Red and their family.
Micah's Soldier is a quick read/listen but is full of emotion and experience from both Micah and Garrison. You are pulled in quickly and rooting for the couple to come together and be strong enough to support each other through what's to come.
Treading Water is a new story for me and I really enjoyed it but struggled on two points. Shane and Shaun are very similar names and through audio it's easy to get the two muddled up. Also what detracted from truly enjoying the story was the narration. Andrew is a good, clear speaker but there wasn't any inflection or accent to differentiate between the characters. I sometimes found it hard keeping up with who was talking within conversations.
I adore the way Shane and Julian come together for their best friend/cousin. The way their relationship blossoms feels very natural and flows through the pages. The support that they offer each other leads to them growing even more in themselves. Shane is still in the closet at his navy job but Julian could possibly be the man that he wants to be his true self for. Julian has been happy running his B&amp;B on Key West but meeting Shane leads to him wanting so much more in his life and willing to put in the work to get both Shane and Shaun happy in his home. Shaun is a strong character, fighting for himself and the life he now finds himself living. You're quietly rooting for him with regards to his health and love prospect in Esme.
I'd definitely recommend the book(s). Looking forward to the next release from Jessie G. I would advise listening to a sample of the audio book before purchasing to ensure that you fully enjoy such a great book and are happy with the narrator throughout the book.
I received an copy of this book from the author in exchange for an honest review.

After 18 years in the US Navy. Shane Parker realises it’s time to leave. I like this character. He has a depth that is so very well thought out.
Julian Brand Knows he not made to be a soldier, even with his family background.its what they expect.he has been trying to live his life how he wants too.
A phone call to them both about a friend they both have. Needs help. Can they work together? Plus how they feel about each other.
What a fantastic book. This is the first book by this author that I’ve read/listen to, it won’t be the last. The details to every character is wonderful. Also the background and main story. Beautifully put together. I’ve never listen to Andrew Reyna.Casey Hunter whom was fabulous in each character. If I could give it more stars I would. Highly recommend.

Two great stories in one

In this audiobook you get the short story, Micah’s Soldier and Treading Water. Micah’s Soldier is a lovely homecoming story that introduces us to the conception of helping injured and returning soldiers. For a short story there is a lot of emotions. I felt Garrison’s loneliness coming through when he thought no one would be there to meet him on his return. My heart went out to Micah still looking out for Garrison even though he had pushed him away. Very enjoyable narration bringing these two characters to life for me.
The second story is about the start of the Ramos Foundation whose aim is to help the forgotten soldiers. The start of the story focuses on Jared Ramos and his assistant Aiden. Together they are getting the Ramos foundation up and running. The story then switches to their first case. Sean who was injured during an accident on an aircraft carrier. The foundation call Sean’s cousin Julien and friend Shane to help his recovery. As much as I wanted to I didn’t quite feel the relationship between Julien and Shane. They were together a lot because of Sean but I didn’t feel the spark between them. Maybe it was because I was getting confused during the story between Shane and Sean. Their names sounded similar to me listening to the narration and I got them muddled at times. Other listeners might not find it a problem. I’ve not listened to anything by Casey Hunter before. I liked the way he approached the story. I had a good sense of the characters and their emotions so I’ll look out for him again.

The first story was very short, but it certainly packed a punch. As it was short, there was little room for the development of characters, but it was a well put together story and set up the second novel nicely.

The second story brings together Shane and Julien. Sean, who is Julien's cousin, has been trying to bring his best friend and cousin together. His chance comes unexpectedly, when he is injured, and the two men come together to help him.

Shane and Julian were a perfect match for one another, there was some angst, but the conflict was in their own heads, they fought through it together and were free to be together. I loved the strength and commitment shown by both men, and how they set out to help Sean.

The narration was good, and managed to convey the various emotions experienced in the story. My only problems were the similarities between the name Shane and Sean, when they were talking it was easy to mix up their names. I did enjoy it though and would certainly recommend. Looking forward to the next in the series.