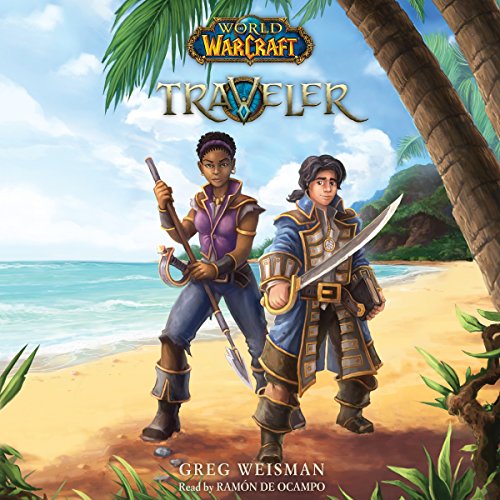 An epic action-adventure series set in Blizzard's popular World of Warcraft® game franchise. Features a young cast of characters discovering the mysteries and majesty of the world around them.

It's been years since 12-year-old Aramar Thorne, a clever boy who is never without his precious sketchbook, has seen his father. So when Captain Greydon Thorne comes ashore and asks his son to join him at sea, it feels as if someone has redrawn Aram's entire world. At sea Aram struggles to get along with the Wavestrider's crew - especially second mate Makasa, a tough teenage girl who has been reluctantly placed in charge of him. Just as Aram starts to get his head above water, a band of vicious pirates attack the Wavestrider, turning his world upside down once again. As Aram and Makasa try to find their way home, they encounter creatures both terrible and wondrous, and Aram will seek to understand Azeroth's denizens as he draws them in his sketchbook, forming unlikely friendships along the way. But the journey is hindered by Greydon's compass, which never points north. If the compass isn't leading Aram and Makasa home - to safety - to what destiny is it leading?

Fantastic dip into the warcraft universe! Now I can enjoy the game, and I cam even show this to my little brother.

I thought the story was great! I have been playing Warcraft since Warcraft II days so am aware of lore like a fan boy! However this was a pleasant new story, and easy to listen to while working even.

Character development was awesome! I can't wait for the next ones.

Great story, narrator does his magic, epic. the ones familiar with the world will definitely like it 😊

I love this book. I love the characters, the story and just how varied it is. Ramón de Ocampo does an excellent job with all the voices; there will definitely be no confusion about which character is speaking as they all sound so distinct from one another.

It's refreshing to have a Warcraft novel that isn't about a major character we already know everything about; it's quite exciting to have fresh new characters visiting known locations like Feralas and interacting with the less established races in Warcraft lore (Like Gnolls!)

I would 100% recommend this book to any Warcraft fans, the only 'Main Series' book that comes close in quality is 'Before The Storm'. If you liked that, you'll love this!

It's entertaining, joyful and sad. I'm very glad that I bought this Audiobook. It made me smile, made me laugh, made me slightly glum and sad, but by the end, it left me wanting more and anticipating the next installment.

I loved the book and being able to listen to Ramón de Ocampo and I would recommend this to any world of warcraft player or anyone who likes abit of adventure, can't wait for book two.

This book is awesome. If you're a Warcraft fan I think you will enjoy this story. It's a fun adventure set in the world of Azeroth. The narrator did a great job and the author really seemed to have done his homework. 10/10! Looking forward to the next in the series.

I really enjoyed revisiting the areas where I leveled as a young Orc so many, many years ago. I like how places and food and beasts in the story made me recall my feelings when first encountering those things. A great read for any Wow fan. Time well spent. You can even listen while grinding out yet another alt in the same areas.

great beginning to a book series.

I love the beginning of the series. But I definitely think that it was written by someone who can see the world cause they played the game. Maybe a little more description, but that's my personal opinion. It is definitely one of my students favorite books. I teach 5th grade.

It was a very good book I would recommend it for anyone who likes action.ITS IS A GOOD BOOK BUT IS IS LONG. :)

does not get any better. blizzard look no further he needs to do every wow book left to go

the story was quite enjoyable. I really like the stories read by Ramon de ocampo. he does really good job with voices. even the sounds of the murloc were pretty cool

Although made for young readers was still a good read

I’ve read all the Warcraft books and left this one last because I was looking forward to it the least. However, I ended up quite enjoying the book and performance was great. Next book in the series was equally satisfying.

great beginning to a book series.

I like the beginning of the series. But I definitely think that it was written by someone who can see the world cause they played the game. Maybe a little more description

If you are a World of Warcraft fan and like the side stories in this universe then you will love this book.