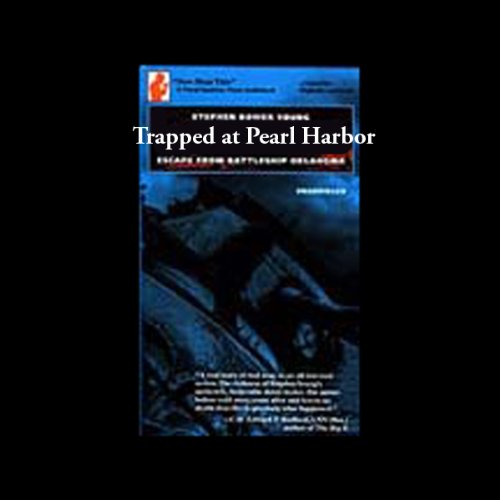 Author Stephen Young was a seaman first class assigned to gunnery duty in turret no. 4 on the battleship Oklahoma when the Japanese attacked Pearl Harbor on December 7, 1941. The battleship was struck by several torpedoes and began to sink, trapping Young and others when it overturned. With incredible realism, Young recounts this terrifying experience, recalling the frantic search for an escape route, the horror of finding the exit blocked, and such unforgettable detail as the water's inexorable rise, the sickening taste of fuel oil, the foul smell of the air, the nervous wisecracks, and finally the silence as the possibility of rescue became ever more remote.
A Naval Institute Press Audio Book (P)1998 by the Naval Institute Press; From the Book Trapped at Pearl Harbor: Escape from the Battleship Oklahoma, ©1991 by Stephen Bower Young

"The richness of Stephen Young's authentic, believable detail makes this never-before-told story come alive and leaves no doubt that this is precisely what happened." (Cdr. Edward P. Stafford, USN (Ret.), author of The Big E)

This book details the suffering of the men of the men trapped inside the bowels of the USS Oklahoma. This ordeal is something that neither the history books nor the Pearl Harbor survivors talk about. It is very well written.

Other than seeing old movie footage of the Japanese attack on Pearl Harbor, I had known little of the plight of those that were there. This is the story of my parent's generation and the incredulity of their innocence at the beginning of the actual attack and their steadfast will to survive both during and after. The narrator was a perfect match as well.

An amazing work put together about Brave Sailors put through Hell. You see Leaders making bad calls and getting men killed. Great Read. I wish it was required reading for all officers.