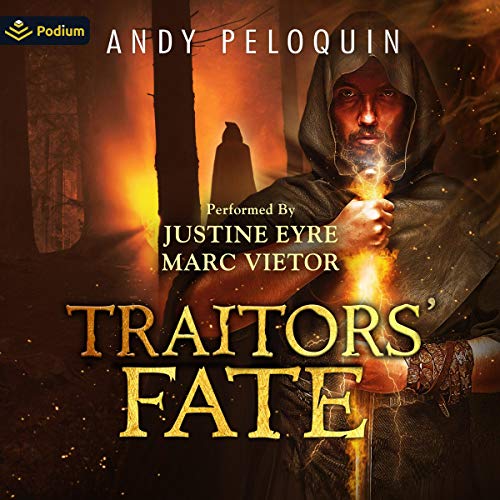 By: Andy Peloquin
Narrated by: Marc Vietor,Justine Eyre
Try for £0.00

Ilanna, Master of the Night Guild, has waged a war for eight years to cleanse her city of the rival criminal organization that nearly destroyed it. When she uncovers a ring of slavers trafficking young girls for sexual servitude around the continent, she is forced to venture into the city of Voramis, the seat of her enemy's power, to hunt down the true culprit and put an end to the enslavement of innocents.

But her enemies will not be so easily eliminated. She must turn to the one man certain to get the job done: the Hunter, legendary assassin of Voramis.

The Hunter willingly accepts a fortune in gold to kill one of the richest men in his city. A mansion fortress and a private army should prove no match for his inhuman abilities.

But as he stalks his target, he unmasks a bloodthirsty conspiracy in the guise of a holy mission. If he doesn't stop the men responsible, the gruesome murders will continue and people - including those he has sworn to protect - will die.

What listeners say about Traitors' Fate

A great conclusion to the Queen of Thieves' series

TRAITOR'S FATE is the final novel in the QUEEN OF THIEVES series by Andy Peloquin. I've been a huge fan of these books since I first picked up CHILD OF THE NIGHT GUILD. They follow Ilanna, a young girl who grows into a strong woman after she is literally sold to the sinister organization that rules the city streets of Praamis. I love fantasy thieves guilds and this is one of the best representations of one, half-mafia and half-ninja that our antiheroine has slowly risen through the ranks of. It's almost a shame to put an end to her stories.

Now Guildmaster of the Night's Guild, Ilanna has settled into a life of peaceful domesticity with her son and lover Ria. Unfortunately, the Bloody Hands gang continues its trafficking of Bonedust and sex slaves in the city despite her best efforts to stamp it out. It is actually depleting her once-vast fortune and has created a good deal of unrest as the Bloody Hand simply sends new grunts to rebuild whatever they destroy. Ilanna thus decides the only way to deal with the organization is to strike at their head in Voramis.

The end of Ilanna's story does a pretty good job of wrapping up the majority of her character arc. She's done her best to turn the Night Guild into a more honorable organization but is still uncomfortable with the majority of its practices. I also appreciated that we got to confirm that she was a LGBT+ protagonist after a couple of books being more discrete about it. I also liked that she remained hyper-focused on trying to stamp out sex slavery in Praamis even though her fellow Night Guilders were wondering where the profit was in all of this.

There was a lot of potential for her "losing the peace" as many times it seemed she was throwing her fellow Night Guilder's lives away for her crusade. I was really interested in the possibility of her wondering whether she owed the Night Guild any loyalty or if they really just a means to an end. Ilanna's distaste for the organization yet few friends outside of it had long been a running theme in the books.

Unfortunately, I do have one complaint about this book in that it actually switches protagonists midway through the book. It moves from Ilanna and her complicated story of war, revenge, loyalty, as well as aging to a more straight forward assassination tale. The new protagonist, Hunter, is apparently one for Andy Peloquin's other fantasy series. He is the protagonist of the Darkblade Assassin series and occupies the second half of the novel with a mission from Ilanna to finish the job she started.

I have nothing against Hunter and he is an excellent protagonist. If the inclusion of him was to direct Queen of Thieves' fans to his Darkblade Assassin books then he succeeded. He reminds me a great deal of Artemis Entreri from the Drizzt Do'Urden series by R.A. Salvatore. Still, I wanted to see more about how Ilanna's story and conflicts shaked out. Eventually, after all, some guildsmen aew going to ask where her real priorities lay.

Traitor's Fate is an excellent fantasy novel full of action, intrigue, strong characterization, and two very well-done protagonists. I feel like their story isn't entirely woven together but that's a small issue in the grand scheme of things. I'll always appreciate gritty fantasy which deals with things like human trafficking, drugs, and murder over those that involve saving the world. That's just the way I roll.