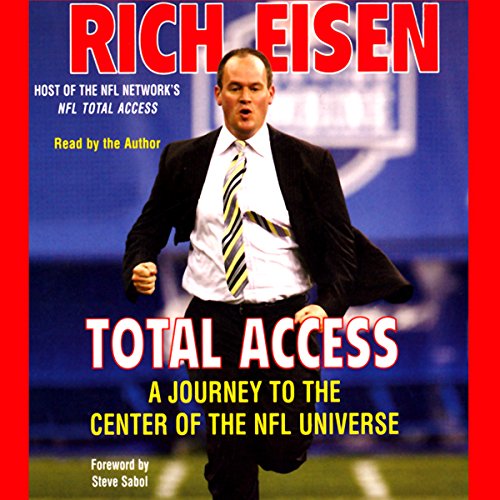 A Journey to the Center of the NFL Universe
By: Rich Eisen
Narrated by: Rich Eisen
Length: 5 hrs and 7 mins
Categories: Biographies & Memoirs, Celebrities
4 out of 5 stars 4.1 (16 ratings)

Rich Eisen always wanted to write a book, not only because he has a lot of fun, interesting stories he's been dying to share with everyone, but also because he's interviewed hundreds of athletes - many of whom like to refer to themselves in the third person. In his 11 years as a national television sportscaster, Eisen has been envious of those athletes, because he has never been able to do that on his job. So the host of the NFL Network's signature program, Total Access, decided to write a book and use it as an (admittedly feeble) excuse to go third-person on everybody.

What's this audiobook about? It's about a journey. It's about eating, living, and breathing the most popular sport in the history of America. The passion. The pageantry. The pigskin. Thanks to his role as host of NFL Total Access, Eisen gets to go to virtually every event on the NFL Calendar: the Super Bowl, the Pro Bowl, the Scouting Combine, the NFL Draft, and the Hall of Fame Induction Weekend. Rich Eisen is there, so go along for the ride with him.

If you love the NFL (and who doesn't), then this book is for you. If you're curious what it would be like to live the sport year-round, this is for you. You see, it's not all about Rich Eisen. It's about you listening to this book and enjoying it to its fullest. At least Rich Eisen hopes you will.

This is a very good audiobook, and I love Rich Eisen's narration. I pay for game pass so I can keep up with NFL games in the UK and that's where I first listen/watched Rich Eisen. He is a fantastic presenter. I wish the commentators/presenters for the English football programs were as good. Very funny and entertaining listening to Rich talk about the NFL - he certainly knows his stuff. Highly recommended.

I really enjoyed the book from start to finish, I loved how Rich took you inside the NFL Total Access show.
A great listen

What you get in this audiobook is a self-regarding, indulgent account of Total Access's success story, and an overwhelmingly self-congratulatory account of how great and busy Eisen's job is. It is a festival of name-dropping and banal anecdotes which, I suspect, may only have been funny had you been there.

What was most disappointing about Rich Eisen’s story?

I really like like Rich Eisen's podcasts and I was hoping to get an insider's in-depth take on how the NFL ticks, and be entertained along the way. As much as I like Rich Eisen's broadcasting style, in this book he is just too flippant and there's just not enough factual insight. I got frustrated with all the puns and whimsy and wanted some NFL flavour: I want to know more about the events and less about the humorous aspects of having to broadcast them, and all the people Rich has worked with in doing so.

No single 'character' - it's not that kind of book. But I could have done with fewer meaningless roll calls of 'sporting legends I have met'.

The book failed. It didn't really round out my knowledge of the NFL season behind the scenes, and it didn't deliver what I like about Rich Eisen.

Entertaining story about the NFL, it's network and commentators. Mindless but a good beach book

Classic Rich! Great to have the icon of NFL Access in the background while playing Madden.

If you want to hear Rich Eisen brag about him self this book is for you. NFL being the subject is the only thing that makes this book tolerable. As always Eisen can take any NFL story and make it about him. Like Al Gore believes he invented the internet, you cant help but wonder if Eisen thinks he invented the NFL. For a fringe fan you may find this entertaining but if you are true hard core NFL fan I would reccomend "A Few Seconds Of Panic" by Stefan Fetsis. Its a way better book and I took tons more from it.

Very in depth and entertaining. Hearing Rich Eisen read the book is great, unfortunately, sometimes it sounds like he's reading the book. My girlfriend enjoyed the book as well and now has a greater understanding of what goes on "behind the scenes" and in the off season and appreciates the regular season that much more.