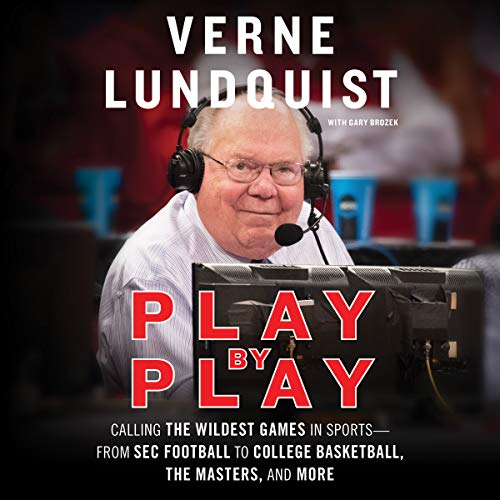 One of America's most beloved sportscasters turns the spotlight on his own life, chronicling his incredible life covering Southeastern Conference football and some of the most iconic moments in sports history over the last five decades.

Verne Lundquist's remarkable broadcasting career has placed him at the center of major sporting events in America for more than 50 years, from Jack Nicklaus' final victory at the 1986 Masters to Tonya Harding's attack on Nancy Kerrigan at the 1994 Olympics to the Auburn-Alabama shocker of 2013. In his first memoir, he replays highlights from his career, taking sports fans behind the scenes of some of the most dramatic moments in modern sports history.

Lundquist goes back to the early days of his broadcasting career, recalling his time as a producer and radio show host in Dallas when President John F. Kennedy was shot. He reminisces about Tom Landry and the great Dallas Cowboy teams of the 1970s, recalls the most unbelievable moments in Masters Tournament history, and relives the excitement of Christian Laettner's buzzer-beater in the NCAA tournament and a host of other memorable thrills.

One of the defining voices of Saturday afternoon football for the SEC, Lundquist offers an in-depth look at the fans, the schools, and the game, recounting never-before-told stories about some of college football's biggest personalities. He also speaks honestly about his friendships with Terry Bradshaw, John Madden, and other greats, as well as his difficult relationship with legendary colleague Pat Summerall. Bringing these memories vibrantly to life with his beloved catchphrases and warm humor, Lundquist gives listeners a front-row seat to history as he witnessed it unfold.

absolutley brilliant. how can you not love this man and his stories. very much recommended

Wish it had more

Verne is a really likable guy, but this whole book reads like he is pulling his punches and trying very hard to avoid offending anyone he’s ever worked with. As a result, the book feels too surfacy a lot of the time. There is also an inordinate amount of time spent recapping long winded blow by blow accounts of long past games. I get including details from some of those games in a book like this, but the length of time spent there felt like filler at many points. It just went on too long. The narrator was too stilted for someone reading a memoir also. Disappointed.

Good listen for anybody who remembers sports he covered from 80’s to retirement. From Master’s stories to Olympics he covers it all. SEC stories were ok and all in all pretty good book.

It’s a major snafu that Verne doesn’t read the book. The book itself is pretty fun. Cool tales from his days with the Cowboys, working the Olympics, the Masters, and of course the SEC!

Surprised the proof reader missed the 4” blade comment and Bears. 4-6 defense vs 46. Also the kick 6 went u the left side not right. Great stuff on the golf and behind the scenes politics. Vern you are one of the best of all time!!!!

Am torn with how I feel with this book

I am torn with how I feel about this book. I watched Verne a lot on his sports broadcasts and like him a lot. This book is about his life and rise in the broadcast business, along with some stories along the way. I think I was expecting and wanting more behind the scenes stories from college football, golf, etc. so I think my rating and review of this book is skewed because of that. For whatever reason I expected something this book wasn’t, so i felt a little disappointed. But I am to have listened to this book and learn more about Verne. #Sports #Tagsgiving #Sweepstakes

Enjoyed it very much. Found myself going to YouTube to rewatch several of Verne's great calls for old times sake.