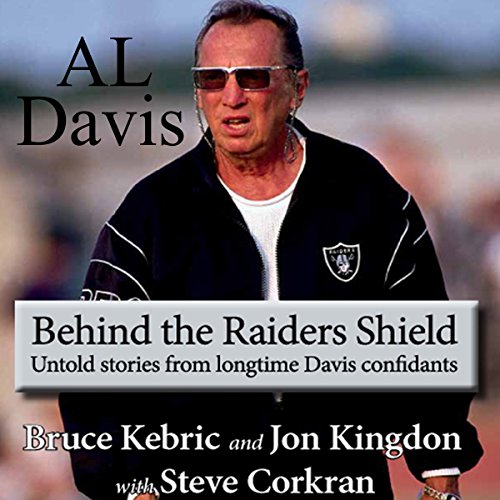 Al Davis: Behind the Raiders Shield

Al Davis: Behind the Raiders Shield

Al Davis was such a polarizing figure that people either admired or despised him. Most cared about what Davis thought on any issue, and he was captivating before an audience. Yet Davis rarely revealed much about himself, his philosophy and decision-making. Everyone knew of Davis and his catchy slogans, especially "Just Win, Baby". But no one knew much about the man. Everyone, it seemed, had a strong opinion about Davis, but precious few had enough information about Davis to proffer an informed description.

For the first time, people will receive an accurate, detailed portrayal of a man in the pantheon of notable sports figures of the 20th century, in a book chock-full of firsthand accounts from those who were present and played a role in many of the seminal moments in Davis illustrious career as the patriarch of the Raiders. Seldom is so much revealed about someone who went to such great lengths to perpetuate an aura of mystery, and control the nature and volume of information disseminated.

Bruce Kebric and Jon Kingdon have teamed with Steve Corkran to take listeners to a place long thought to be forbidden: Behind the Raiders Shield, for an unvarnished look at what it was like working for Al Davis.

What listeners say about Al Davis: Behind the Raiders Shield

A must for Raiders Fans

Fascinating insight into the Raiders organisation written in a way that makes you feel like you're discussing the team over a few beers with a good friend.

As a fan from the UK it was often difficult to find in depth information/news on the Raiders growing up in the 90s and early 2000s. This book makes up for that, Even if it does enhance the depressing feeling of 'what could have been'.

Scott O'Dell does a brilliant job with the narration, truly making it feel like you're a fly on the wall during a chat amongst friends.

The three authors are two longtime pro football scouts and a seasoned sports writer that give readers an inside peak at working with Al Davis and various NFL players, coaches and staff. I thoroughly enjoyed listening to each author's anecdotes during my long commute. Highly recommend!

Some great untold stories of the Legend that is Al Davis! Some old and some never heard before definitely answer some questions over the last 10 years of the Raiders under Al Davis.

Once A Raider Always A Raider

Just amazing, the Raiders have always been my team. Just hearing about the players the team could have had is just crazy. Nonetheless I’m a R4L...What a great read.

It was great to listen to and in a way you get to know who Al Davis was. A Legend...

The book often touches on the same story multiple times but in different parts of the book, causing for a lot of repetition. Almost like a very poor attempt at a Quinten Tarantino type narrative jumping back and forth and then off topics tangents at times isn’t the read. Overall the stories are interesting and as a Raiders fan frustrating. I appreciate what Al Davis built early on with the Raiders. if your under 35 years old, this book doesn’t carry much relevance, as most of the stories are from 60’s, 70’s, 80’s. Some newer stories are in there mainly the failed coaching tenure of Lane (Lance) Kiffen and a poor job of the Jon Gruden era. Overall it’s a good book to listen too on a road trip. It not a page turner, but it’s informative.

this book has some very good points and I learned some things I did not know as a lifetime Raider fan. it does however go over draft picks a little more than I would like that said it is a must read for any die-hard Raider fan

Al Davis was a genius- he also had to Always be right. As his health deteriorated his team suffered. Trading Gruden was the worst mistake of his entire career. Let’s hope Mark will not make the mistakes of his father.

I was born in Oakland as was my father and his father. we are all Raiders in my family. been following the Raiders as far back as I could remember and I think this was the best book on AL and HIS Raiders I've ever heard.

just read baby! great story of the legend Al Davis! must read for all Raider fans!

A must for Raiders fans

Fantastic book, captivating from beginning to end. I loved hearing all the untold stories and insider information not only about Al but about the NFL Draft, John Gruden, Marcus Allen, Lane Kiffin, Warren Sapp and Ron Wolf. Brilliant Narration from Scott O’Dell, he really brings the characters to life; It really felt like I was really hearing all those people’s voices first hand. I’ve listened to Behind the Raiders shield 3 times already, absolutely love it.