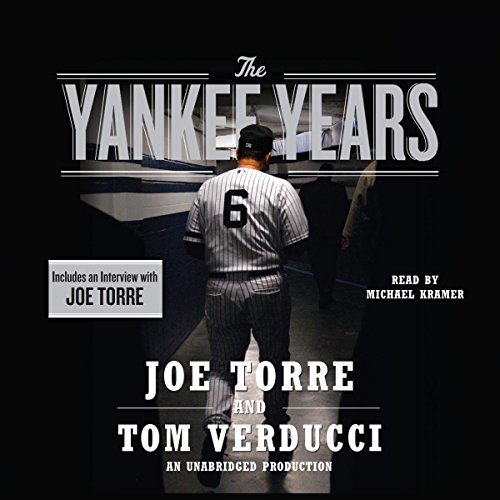 A dramatic and revelatory account of Joe Torre's 12 years as manager of the New York Yankees.

Joe Torre is the most successful and most respected baseball manager of the modern era, steering the Yankees to six American League pennants and four World Series championships. When he left the team in 2007, it was front-page news around the country. Famously diplomatic during his tenure with the Yankees, Torre finally speaks out about what it was like building and managing the dynasty during those 12 glorious and tumultuous years.

Written as a third-person narrative with Sports Illustrated Senior Baseball Writer Tom Verducci, The Yankee Years is a thoughtful, utterly honest, and gripping behind-the-scenes look at the Yankees organization from top to bottom.

What listeners say about The Yankee Years

After all of the uproar over quotes that were erroneously attributed to Joe Torre I thought that I would listen to this book myself and decide.

This is not a book that is written by Joe Torre. Rather, he is a major contributor. It is a story ABOUT the 12 years that he managed the Yankees. There are plenty of stories about the players and other Yankees. The sole source is not Torre. Many of the quotes are directly from the people involved.

There are many fascinating sub-stories in this book. For example, the concept of the economics that drove the Moneyball craze are discussed. The teams that did well, and those that did not do well, are analyzed.

There are some great lessons in the book about life taught by Torre. His principles on leadership, trust and honesty shine through in all that he did. The way that he uses his principles in dealing with players, owners, the press etc should be a pattern for all people in business and other phases of life.

It is true that Alex Rodriguez does not come across in a favorable light. But the light is cast by Alex's actions and his own words. It is not done in a malicious manner.

What did you love best about The Yankee Years?

This book is a very comprehensive chronicle of Joe Torre's time as manager of the Yankees (as the title accurately indicates). I have always been a Torre fan ever since he broke in as a player with the Braves. In fact, at that time (remember, this was pre-Johnny Bench) I thought Joe Torre might end up being the best hitting catcher in MLB history. While I very much appreciated all of the detail and rich insights this book provided, I wish it would have covered more of Torre's career----both as a manager and as a player. I also appreciated the insights on the other key Yankee figures during that era, e.g. coaches, ownership and especially players. In fact, the only negative for me (and here I obviously part with other reviewers) was the narration. Who picks these narrators anyway?! Michael Kramer may very well do a fine job with other books (as long as the reader does not object to unconscionable pronunciation errors of proper nouns), but his voice and intonation did not work for me with this book. Sometimes when I struggle initially with a narrator, I will become accustomed to his voice within the first hour or so and then be fine the rest of the way through, but not this time. And also, BTW, my criticism of his flagrant mispronunciation of names is not limited to unusual names and obscure players. Very annoying and frankly inexcusable.

What other book might you compare The Yankee Years to and why?

The Best Team Money Can Buy, by Molly Knight---a book I consider superior to this one.

Would you be willing to try another one of Michael Kramer’s performances?

Not unless I found the content irresistible, and even then, I would probably buy the book (hard copy).

None that I haven't already noted.

Write another book on Torre that includes his time before and after the Yankees.

Ever wonder what really went on... Beyond the headlines ,,behind the rumors. Great book. Paul T.

I'm not a Yankee fan, but I've been a Joe Torre fan since his time with the Cardinals as a player and Braves as a manager. The book is OK. There are many good stories, insights, and some very detailed accounts of games, contract negotiations, the Steinbrenners, PEDs, and baseball in general.

The one drawback is it seems like each chapter was written without regard to what was in the other chapters. Many times there would be a reference to an event or game that was covered in a previous chapter, without any acknowledgement that the reader/listener had already been told this bit of information.

Also, it sometimes was hard to tell who was speaking and/or how the book was written (1st person, third person, etc.). The narration was good, assuming he was reading and couldn't really help the reader know when Mike Mussina was talking, Torre was talking, or someone was narrating.

If you are a Torre or Yankee fan and/or want some insight in the 12 Torre years in pinstripes, it's worth an Audible credit!

What I thought was going to be a book chock full of boring facts turned out to be a wonderful journey inside the clubhouse of the Yankees 1996-2008 seasons. The story is written in chronological order and does not jump around. Joe Torre goes into detail about his relationships with each one of his Yankee stars that made an impact with the team for the 12 years he was manager. He also goes into detail about how difficult and rewarding it was to work for the Steinbrenner family. My favorite section of the book detailed each one of the 4 World Series season (1996, 1998-2000). If you are a Yankees fan, this is a must read.

Not just for Yankees fans.

I've been looking for a baseball related audiobook so I decided to give this one a try. Even though I'm a Cubs fan, I always liked Joe Torre and figured this might be interesting. I was right. Highly recommended to anyone interested in the behind the scenes of a Major League Baseball team. The chapter on steroids is a real eye opener.

If this book had been marketed honestly it would have listed Tom Verducci as the author, with Joe Torre. I expected to listen to a first-person account of Torre's tenure with the Yankees. Instead I got a third-person account written by Verducci with Torre prominently quoted. The Yankee Years also included several non-Yankee baseball occurrences that occurred between 1996 and 2007. This was not a bad thing and it offered some perspective. Verducci also offered up a lot of "so what" statistics that, given what we learned in the book, would have been more interesting to Brian Cashman than to Joe Torre. Rarely do I suggest a book should have been shorter but, in this case, I think we could have learned everything that we wished to learn in about 10 hours. I've heard Michael Kramer narrate other works and he generally does a good job. In this book, however, his monotone weared on me after a while. Not a bad book, but it could have been better.

More than a memoir!

The books contains great stories from a great manager during some great years with some great teams. But more than that, Torre/Verducci provide insight into sports psychology, philosophy of leadership, transitions in the sport and more! Some quotes from interviews are used more on multiple occasions, but to good effect drawing out different nuances of particular contexts. Kramer's reading is an excellent performance and adds to the read.

Well-written and performed. Honestly, my only real problem with the book is the Narrator sounding too startled and/or melodramatic. The narrator has a voice not unlike Joe Yorre, though.
B+work!

A look inside the Yankees in a way that only the leader can describe it. Great audio book.