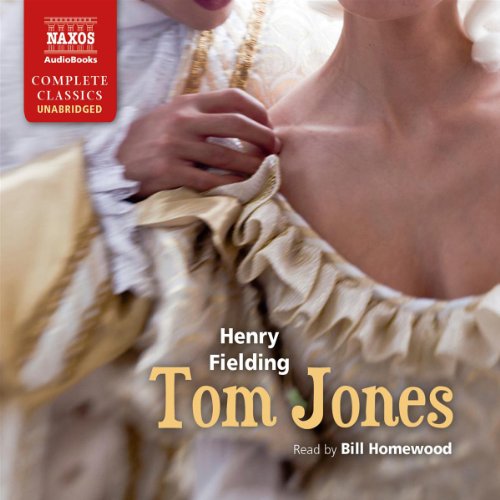 By: Henry Fielding
Narrated by: Bill Homewood
Try for £0.00

Tom Jones, a foundling, is brought up by the kindly Mr. Allworthy as if he were his own son. Forced to leave the house as a young man after tales of his disgraceful behavior reach his benefactor's ears, he sets out in utter despair, not only because of his banishment but because he has now lost all hope of gaining the hand of the beautiful Sophia. But she too is forced to flee her parental home to escape an undesirable marriage and their stories and adventures intertwine.

What listeners say about Tom Jones

Returned to this book after about 30 years. Loved it even more than the first time round. A wonderful mixture of philosophical musings and farce.
Extremely well read by Bill Homewood

Excellent voiced reading by Bill Homewood. The female voices are mostly excellent, and that of Squire Weston is remarkable and hilarious.

A classic with narrative plots sharing much in common with other novels published within 150 years before or after. For example, there are clear similarities between Austin''s romances or Don Quixote and Sancho Panza with Fielding's hero and his friend Partridge.

If you can show patience for many archaic tropes and literary devices, e.g. Fielding frequently addresses the reader and offers epistles upon philosophy, literature, art and human nature. This is revealing in relation to C18th ideas but generally it it quite tedious. However, stick with it and you will be rewarded.

Quirky, intriguing and funny, but at times somewhat repetitive. One gets the impression that the author struggled to let go of his reader’s attention having attained it. Definitely worth the read/listen.

Warning, if you like a very slow delicious story to unfold over a really long period, you will relish this book. If you find that slow and boring, you will hate it. The only rapid part came about 2 hours before the end, when suddenly all loose ends were tied up, and you had to wrack your brain to remember 40 hours previously, who was Jenny Jones? Did Mr Allworthy even have a sister?

I did not like this story. Not the speed, I love classic literature and the way of writing. The problem was the story spent about 30 hours persecuting a rather insipid girl into marrying someone she didn't like, because he had a lot of money. This is so foreign to a modern audience who would not believe that a father loved his daughter, whilst trying to make her thoroughly miserable.

Tom himself does not appeal to me as any kind of character a girl would like. He may have a good heart, but he is foolish and makes stupid mistakes at every turn, mostly due to sleeping with every woman he can find whilst claiming to love Sophia. What kind of love is that? The men are patted on the back for conquests, the women who do the same are whores. Not a good read for a modern girl.

I ended up feeling sorry for Blifell. Not highly recommended.

Kudos to the narrator. Each character is carved out with diamond precision. Great story. Great narration.

even the great w. somerset maugham could, on occasion, bore you to distraction, so his reaction to tom jones -- the book, the classic, not the singer, who came much later -- is of little consequence. he found the book unreadable, boring.

well, the truth is that there's a great deal of utter waffle in this book, which could have been cut, snipped, abbreviated with no ill effect to the story, and in fact maugham did just that. as editor of a series of classic books he shortened tom jones and created a totally readable, totally delightful, version that could be appreciated by any mid-20th century reader.

i find maugham's edited version quite satisfactory, and a delight to read. and maugham's version is only fielding's own version, as edited by a regular modern editor. any other editor today would have done the same, if this had been a manuscript submitted by a modern writer.

so listening to a reading of the original version, with its overgrowth of diversions, digressions, and latin quotes is somewhat distracting. it's easy to lose the story, or the progress of the tale, and even in maugham's shortened edition there comes the point -- roughly around page 260 -- where the story finally grinds to a halt.

but carry on, the book ends gloriously and you would wish that it could continue for ever on. this is a classic, after all.

so my recommendation would be to read the book in some form, study notes, see the movie, read the novel or the maugham version, and THEN get down to the audible version. a great reader. but it took me to around book three or 15 per cent of the text, before i could finally get into the story and the language -- and this, despite having read the book and some secondary material about it. perhaps reading the printed book alongside listening to the audio format may provide a help in finding an easier and faster access to the author's circuitous style.

if you find the book inaccessible, worry not. you've got w. somerset maugham on your side. or try to find a copy of his shortened version. it is by no means a "simplified" or "reader's digest" edition. it's simply a book for modern readers.

"Around the world the trip begins with a kiss"


I enjoyed this 1749 comic novel follows the life and adventures of young Tom Jones in a picaresque panorama of 18th-century Britain.

Squire Allworthy found Tom in his bed as a newborn infant. The kind but gullible Allworthy raises Tom, who falls in love with the attractive neighbor Sophia Western. Unfortunately, Sophia's irascible, short-tempered dad has agreed, against Sophia's wishes, to give her hand in marriage to Squire Allworthy's repulsive and hateful nephew Blifil.

Blifil's contrivances combined with Tom's boyish excesses cause Allworthy to expel Tom from the Allworthy estate, which throws Tom into a series of adventures over and around a series of obstacles in order to learn the mystery of his birth, gain his fortune and win Sophia's hand.

More than you think it is

The movie is good, but it cannot capture the wonderful insights and delightful language in Fielding's writing. The characters are fine representatives of country life both above and below stairs. And the narrator is one of the very best. All in all, this is a listen you'll love.

The narration is marred by many character voices that are difficult to listen to, especially a strained falsetto used for lower-class women. As there are many long monologues, this becomes extremely irritating, especially in such a long book.

Tom Jones is of course a milestone early novel, and on the whole enjoyable. I must admit though that I do find the prose style often long-winded, making it less than ideal for audio, where skimming is impossible.

I enjoyed the story immensely, however, the author would go off into tangents. Sometimes related to human nature and the story but other rantings about critics and his writing style. It Reminded me of Van Morrison and his anger at record companies.

One of the great works of English Literature

This is truly one of the great works of English Literature. Comic, indeed, but of a sophistication far beyond the current level of language usage.

The author is witty and engaging. The narrator was a pleasure to hear. A true classic.

A big commitment made superb by excellent reader.

Bill Homewood is an excellent reader and his understanding of Fielding’s world and language, combined with his theatrical mastery and control, made what has otherwise been a great English novel I’ve never managed to stay with in print, into a jovial companion for long commutes and after-dinner dishwashing for the many months it took to saunter through it. Homewood creates distinct and consistent voices for dozens of characters in this sweeping picaresque “history” of the dashing and virtuous-to-a-fault Mr. Jones and his many escapades. It is a big commitment, but I highly recommend this audiobook, especially for those who are interested in 18th-century social class, etiquette, and society. Fielding is one of the English language’s admired writers - which I now understand listening to this book’s sharp wit, digressions on writing itself, and discussions of art generally.

All is well that ends well

I found myself laughing, or identifying people with the various characters. Great lessons on virtue.