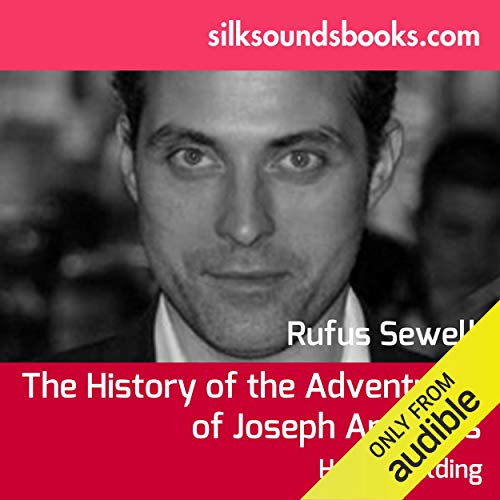 By: Henry Fielding
Narrated by: Rufus Sewell
Try for £0.00

Riotous, sexy and groundbreaking, Henry Fielding's Joseph Andrews: The History of the Adventures of Joseph Andrews and His Friend Mr. Abraham Adams, published in 1742, was one of the first English novels.

Fielding was melding and parodying the two major forces battling for control of the fiction market at the time - the mock heroic, neoclassical tradition as practiced by Pope and Swift and the popular and populist fiction of the new novelists such as Defoe and Richardson.

Richardson's Pamela had just taken Britain by storm, and following on the success of Fielding's parody of the novel, Shamela, the story of Joseph Andrews follows Pamela’s brother in his journey as footman to the rather dippy Parson Adams.

In style and form, it imitates Cervantes' Don Quixote, with the servant and master undertaking their major journey together, but the sexual adventures of the young Joseph Andrews and his sorely tested chastity provide the real meat of the book's plot.

Described by Fielding as 'a comic-romance', Joseph Andrews is a bawdy and merry book, but it is also wrought through with Fielding's devotion to the Greek and Roman classics and with his social conscience, which shines through in its fresh approach to the stifling moral hypocrisies of the day.

What listeners say about Joseph Andrews

Humour at its best

If you somehow ended up suffering through Richardson's abysmal "Pamela", first of all - have a cookie, you deserve it. Secondly - read this book, it's even better than the cookies!

Fielding wrote this novel in direct response to Richardson's morality tale of a young girl protecting her virtue from the dastardly Lord of the manor and praying for all and sundry along the way. Fielding takes the formula and turns it on its head while seemingly ticking all the boxes of the genre. His protagonist is Pamela's brother, just as good-looking and just as virtuous, who sets off on a perilous journey back home after rejecting (mostly by accident and through sheer stupidity, rather than due to his exceptionally high morals) the advances of his merry widow Lady. Hijinks ensue and along the way Fielding lets us know exactly what he thinks about noble ladies, pious clergymen, Christian compassion and the general fount of human kindness.

What elevates this novel even further is Sewell's magnificent narration; if ever there was a perfect marriage between a book and a narrator, this surely is it. Honestly, it's a crying shame that he hasn't narrated anything other bar this book and another, as he brings even the more archaic bits of the text (this was published in 1742) to life. His portrayal of Lady Booby, who tries to seduce Joseph, while still preserving outward propriety and of her servant Madam Slipslop who is equally enamoured with Joseph and can be best described as a horny old goat is worth the price of the book alone!

If you need any more convincing, here's a brief excerpt - Joseph has been robbed and beaten by some highwaymen and left for dead in a ditch:

"The poor wretch, who lay motionless a long time, just began to recover his senses as a stage-coach came by. The postillion, hearing a man's groans, stopt his horses, and told the coachman, he was certain there was a dead man lying in the ditch, for he heard him groan. "Go on, sirrah," says the coachman; "we are confounded late, and have no time to look after dead men." A lady, who heard what the postillion said, and likewise heard the groan, called eagerly to the coachman to stop and see what was the matter. Upon which he bid the postillion alight, and look into the ditch. He did so, and returned, "that there was a man sitting upright, as naked as ever he was born." — "O J — sus!" cried the lady; "a naked man! Dear coachman, drive on and leave him." Upon this the gentlemen got out of the coach; and Joseph begged them to have mercy upon him: for that he had been robbed and almost beaten to death. " Robbed ! " cries an old gentleman: "let us make all the haste imaginable, or we shall be robbed too." A young man who belonged to the law answered, "He wished they had passed by without taking any notice; but that now they might be proved to have been last in his company; if he should die they might be called to some account for his murder. He therefore thought it advisable to save the poor creature's life, for their own sakes, if possible; at least, if he died, to prevent the jury's finding that they fled for it. He was therefore of opinion to take the man into the coach, and carry him to the next inn." The lady insisted, "That he should not come into the coach. That if they lifted him in, she would herself alight: for she had rather stay in that place to all eternity than ride with a naked man."

Rufus Sewell does a wonderful job here. I'm particularly impressed by his ability to get the voices of the female characters just right. Fielding's novel, a satirical take on Pamela, is very funny, and enhanced by this reading. Hugely enjoyable

Rufus Sewell is magnificent in this! He captures the wit of the narrator so perfectly and the pace is so strong and lively you will want to listen to the whole thing in a day.
The plot has some great twists, there are many laugh-out-loud moments and some hilarious lines. Even the digressions are gems, actually, perhaps they were even my favourite parts.

A perfect reader for Henry Fielding

Plot-wise, I far prefer Tom Jones, Either Fielding hadn't perfected his gifts or he was constrained by trying to keep his plot at least somewhat related to Richardson's Pamela. But there's lots of action, as well as classic Fielding-isms such as mistaken identities, hypocrites, sexually rapacious women and men. There are also the digressions into important points about human nature that are oftentimes BORING. The good news is that Joseph Andrews has far fewer of these than Tom Jones.

Henry Fielding + Rufus Sewell is a simply ideal conversation. He gets the tone and the humor just right.

I'm more or less in love with works by Fielding, but Joseph Andrews, while hilarious, needs a careful reader. Rufus Sewell brings out each character, and the humour of the situations, clearly. This version has the reader it deserves and is well worth the listen.

This is why audiobooks can outshine the original

Would you listen to Joseph Andrews again? Why?

Yes. If a book makes you laugh out loud 250 + years on it deserves to be read again, and this owes nearly as much to Mr. Sewell's performance as to the hilarious text. The story as a whole, despite all the misadventures and hi-jinks, nevertheless gives you a real feel for this period in England.

All great books feel modern, and this one does in many ways. I particularly enjoyed his searing attacks on the hypocrisy his observed, and the attitudes of the characters he describes are people you recognize today.

His comedic timing, his phrasing. He absorbs all this beautiful prose and adds his own energy and a fantastic array of voices. I will certainly look for other performances by Mr. Sewell.

I loved this audiobook! The story was engaging and funny; I stayed engaged until the very end. Rufus Sewell is a very good narrator and made the story even more enjoyable.

The story meanders, but is entertaining.

Rufus Sewell is the only reason I was able to get through the entire book. His reading of it is excellent. He brought the characters to life. The story itself lost my attention a few times, but I’m glad I stuck it out as it was an enjoyable and funny book.

...you will like this! Very similar in style and tone, the reader will follow Joseph Andrews (and the true star of the book, Parson Adams!) on many hilarious adventures. Admittedly, the CONSTANT indignities laid against poor Fanny and her chaste virtue can be a bit cringe worthy sometimes, but it all works out end the end. Highly recommend!

The rich, moving and nuanced performance by Mr. Sewell is eclipsed only by Fielding's tale.